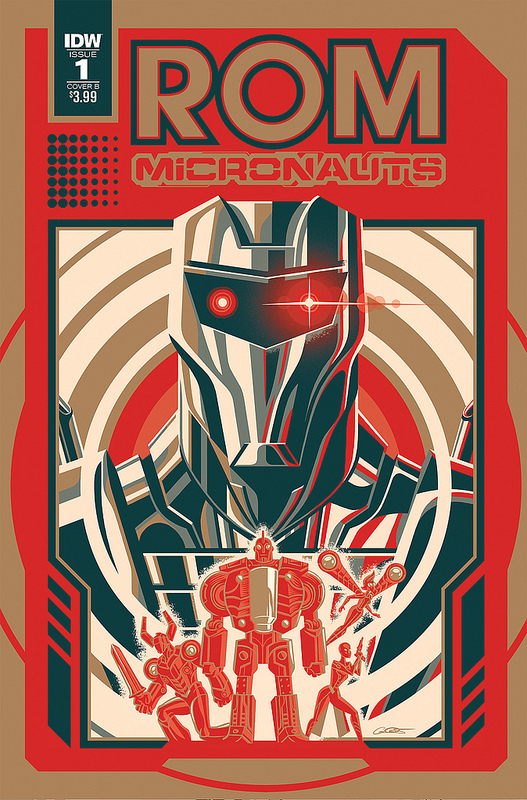 I haven’t read a lot of ROM so it was cool to see him take center stage here. He shares the main character role with the Micronauts as you would expect but as they are a whole team and he is just one person you can see how calling him the main lead can still be pretty valid. It’s a great comic with excellent artwork and a lot of fight scenes inside. I can safely say that the ROM comics are in good hands if they are like the ones here.

The story takes place after a big crossover event where Optimus Prime and a bunch of other big comic heroes fended off a big invasion. Now the Wraiths have begun to regroup and they are teaming up with the Baron, a big enemy of the Micronauts. They are going to work together to resurrect the Wraith god. Fortunately the Micronauts are on the case. They let ROM know that this is going on so he agrees to help them end the threat. Unfortunately the Autobots are currently busy so this group will have to do. ROM is an accomplished fighter, but what can the Micronauts do? Time to find out.

There’s a lot of action here right from the get go. I haven’t read the previous comics but I felt pretty comfortable with where the story was at. It drops enough little references for you to piece together what happened and what needs to be done. You’re thrown into the thick of it, but you always feel as though you are prepared. Another bonus for a smaller scale story like this is the stakes feel a little more real. I think I speak for many when I say that after the 50th time or so of the multiverse being at stake in DC/Marvel comics it can get a little old. In this universe it feels a lot more fresh at the very least and it’s more of a planetary threat then a universal one.

The writing is on point here. All of the characters seem pretty likable. I’d say that ROM steals the show for me. He just seems like such a great hero. The guy does what he can to save the universe and is focused on being a hero. He can be emotionless like a robot and yet not overdoing it so you can still feel his traces of humanity. He’s also the power hitter that the group needs as he can go toe to toe with any of the other villains in this comic. There’s an advertisement at the end of this collection showing off ROM vs Transformers and I can definitely see how that would be a fun battle. Honestly, ROM would probably have the edge there based on his speed.

That’s not to say that the Micronauts are bad though. They have their own mini robot who is pretty tough. He tends to talk a bigger game than what he can back up though so prepare to see him get wrecked a lot. The others feel a lot like the Doom Patrol or those classic sci-fi groups that would go on various space adventures back in the day. They’re all capable fighters and there’s a lot of history behind them. None of them particularly stand out, but they’ve all got potential to go along with their personalities. There just wasn’t much time to explore their characters with the impending crisis.

I also really liked the villains. Once again, ROM’s side won out here. The Wraiths have excellent designs and their magical abilities make them a legitimate threat to any of the heroes. The high ranking Abstract member can even go through things which is always handy. I think they didn’t need to make a deal with the Baron and come across as a little gullible at times, but I guess technically they did make Baron keep his end of the bargain so it worked out in their favor. Meanwhile the Baron is a cool villain as well. With his armor he looks like the Shredder and his power change ability makes him a tough threat as well. He’s certainly a master strategist and I have to give him some kudos for his plan. It’ll be interesting to see how the Micronauts try to get back at him.

This comic really succeeded in making you invested in both titles. I think a big part of these crossover events that has to happen is a way to get the general audience into the comic. Naturally fans of both series will already be reading it, but what about everyone else? A good crossover event is a great way to get in new readers and I think the writers did a swell job of making sure both series got a lot of representation. Both of them have many exciting adventures left in store. ROM appeals to me more because I love the aesthetic as well as all of the characters in the verse, but both are quite good and would certainly be earning a positive score from me. I don’t know when I’ll be checking out more comics in these titles but if I do you can be sure that I’ll be writing some reviews.

I usually end up talking about power levels a lot in these crossovers but there isn’t much to say. It’s clear from the start that ROM and the characters from his verse are significantly stronger than the Micronaut counterparts. Still, the latter are able to contribute because their small size helps them eradicate viruses pretty easy and they also have experience with the Baron. Shrinking ROM was also a good way to balance out their power levels. If anything I have to wonder how the Micronauts ever handle the Baron on their own because he looks way stronger than what they can deal with. So, ROM and friends may have been nerfed a little bit here, but not much and it was all handled pretty good I’d say.

Overall, This was a great comic. I always love crossovers and this one kept them at the high standard that I am used to. It was cool to see the Wraiths because up til now I never really knew who he would fight. I should also quickly mention that ROM’s two teammates were helpful as well. While they aren’t quite as strong as ROM they are certainly still formidable and should not be underestimated. The fact that these robot hybrids are effectively immortal and self repairing make them very lethal. It’s just such a cool concept behind ROM and I can’t emphasize that enough. Anyway, check this comic out, you’re sure to enjoy it!

2 thoughts on “ROM & The Micronauts Review”