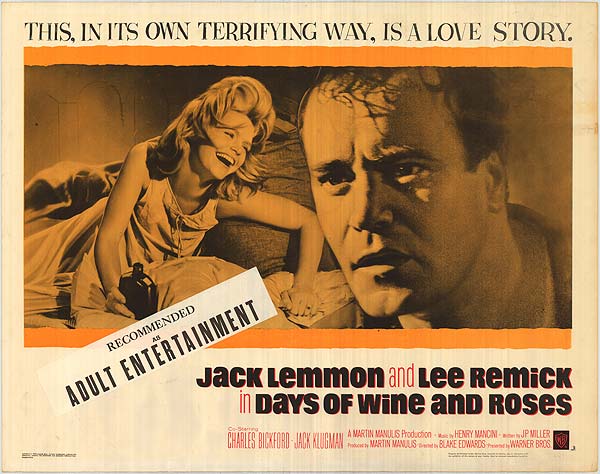 It’s time to look at a film about drinking addiction. I can’t say that I had high hopes for the film going in and it looks like that feeling was certainly well warranted by the end. While it’s a concept that isn’t particularly fun as it is, the film manages to use some poor writing to make the film harder to get through than necessary. What do I mean? Stick around and you’ll find out!

The film starts off with Joe heading back to the office to get some work done. He hasn’t been sleeping too well but at least he’s been drinking so he’s ready for the day. He wants to be a PR agent but instead he’s a coordinator for some dicey activities. He wants to complain to his boss, but doesn’t have the heart to do so. That’s when he runs into a secretary named Kirsten. He immediately falls for her and shows his affection by asking her out. When she denies him, Joe begins making faces at her and throws around a lot of insults. He suggests that her skills aren’t what got her the job and makes a lot of mean remarks which Kirsten takes offense at. She runs off, but of course Joe stops her and gives a very fake apology. Immediately the two decide to get married.

Thing is, they got married so quickly that they don’t really know each other. Hoping to avoid ever having to do so, they fall into the land of liquor. Eventually they are drunk 24/7 all days of the week. This problem continues to snowball until Joe is out of a job and Kirsten starts burning the house down. Joe decides that he’ll stop drinking but Kirsten refuses. As a result Joe keeps falling back into the vice due to peer pressure. He’s going to have to choose what is more important, his marriage or staying sober. It’s going to be a tough struggle either way.

I think you can see where the dicey writing can in to play here. The romance makes absolutely no sense. There’s no reason why the two would have been paired after you see their opening scene. It’s just him being mean to her in petty retaliation for being declined until she does a 180 and accepts him. Then getting married a few days later is a bit much. There’s no real reason to root for these characters. Even before the drinks they don’t seem like particularly good people. Take a look at the scene where they visit Kirsten’s dad. They just drop the bomb on him that they’re married. It’s almost like they’re taunting him because he never even got to give his input. It’s a pretty mean thing to do.

So we already don’t like either character and they’re not even drunk yet. Throw in their drunk episodes and things get worse. You’d think they were taking hard drugs with how crazy they were acting. Of course, everyone has different effects when drunk, but man do both of them take it really poorly. Joe tries to get out at least, but he does manage to relapse a bunch of times. At least in the end he stayed strong. Then you have Kirsten who doesn’t even try and doesn’t get a particularly happy ending here. It is a shame since she used to not drunk and Joe got her into it, but even so she should have stuck away from the drinks. The first time she at least halfheartedly tried to say no, but then Joe brought some in after working in the forest at night. He’s such a bad character but she’s also pretty bad by the end.

The only good character here is Jim. Jim is the chairman for alcoholics anonymous and he does help out quite a bit. Without him it’s fair to say that Joe would have been doomed. Of course, it is true that with willpower you can do a whole lot, but you gotta know your limits. Groups and places like this exist to help those who know they can’t stop on their own. Things are always easier when you have people to support you and getting out of this addiction is no exception. Once Joe finally accepts this he is able to move forward. Him is very patient and supportive throughout. He’s probably seen this situation many times before, but he never makes Joe feel like he’s just another cog in the engine. He makes sure to help him every step of the way and that’s why Jim is the MVP here.

Overall, This still isn’t a good film though. The writing has major problems with the biggest one being the fact that the characters aren’t all that good even before they’re drunk. As a result it only gets worse once they do start drinking. The film is pretty long and it’s mainly the characters going in circles for quite a while before the situation finally changes. It’s definitely not my kind of movie but if you want a hard hitting movie with unlikable characters who try to be better than they were then maybe you’ll enjoy this film. I’d sooner recommend watching something like Man of Steel though. There we get a beacon of hope who doesn’t make these mistakes.