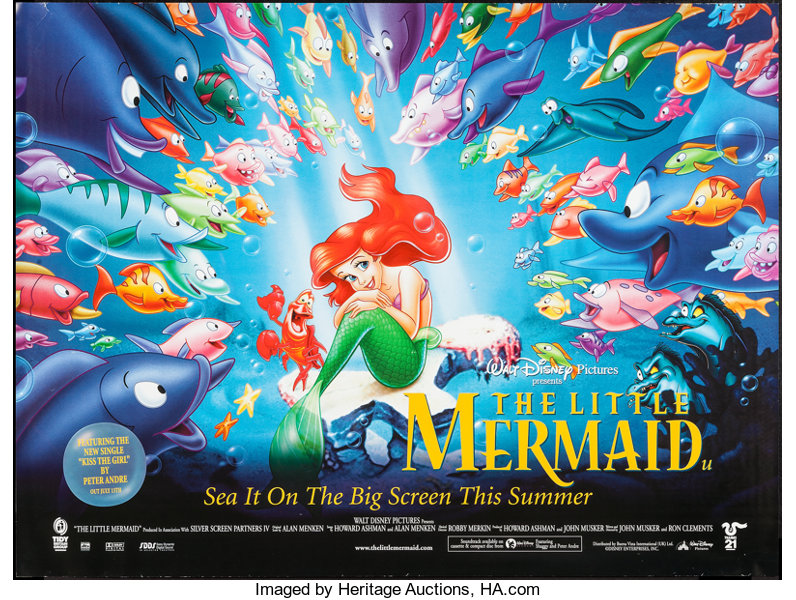 It’s time to look at the classic story of The Little Mermaid. It’s definitely a very well known Disney film and for good reason. It’s got solid animation, a tight plot, and even good action scenes. This is a very complete Disney movie and one that holds up well to this day. One of these days I ought to do a ranking of the classic Disney titles, but this one would be pretty high. It beats Aladdin, Dumbo, Snow White, Cinderella, but isn’t quite ready for Mulan.

The film does a good job of showing off the underwater kingdom and really illustrating how much better it is than the human world. Ariel lives in pretty much a paradise, but unfortunately the grass always looks greener on the outside. She has always had a fascination with the human world and after saving a prince she realizes that she wants to be with him instead of the kingdom. Ariel makes a deal with Ursula that she can woo the prince in 3 days or she will obtain the mermaid’s immortal soul. The stakes are high, but Ariel is ready for action.

Right away you can tell that this title is a little more intense than the previous Disney films. Maybe they wanted to take advantage of the fact that is was a newer title, but it is noticeably more violent than the others. Now, when I say “violent” keep in mind that this is still G-PG. It’s nothing crazy, but the stab at the end is pretty brutal and then you have Ursula eating creatures that are still alive. Her lipstick seems to be quite nefarious and then there’s also the scenes of the cook chopping up the fish. It does raise the stakes a bit here as the heroes are in real danger most of the times. There isn’t all that much slapstick or humor during the chase scenes compared to some of the other titles. When the villains are after the heroes it is life or death.

The animation is also quite stunning. In that regard I can definitely say that this is the best Disney animated flick from this era. The colors are all very vibrant and yes, I did see it in Blu Ray, but I’m sure the film also deserves most of the credit here. Naturally the songs keep pace as well with quite a few excellent tunes in there. In particular Sebastian gets a really solid song “Under the Sea” which is rightfully as popular as it is right now. There really isn’t a weak song in the mix.

As expected the pacing is also pretty sound. There’s never a dull moment here and the story is always transitioning into something. We also get development for all of the characters. The Prince even has his own supporting characters like his attendant who wants him to settle down. This is usually where I’d bash Prince Eric for going for rebounds, but I guess he was being mind controlled so it isn’t quite as awful as it usually is. Once the control was gone he went back to being normal and seemed more or less loyal. I can see why he was interested in the voice, at first, but it’s good he tossed his instrument away when the going got tough. You’ll still feel bad for the attendant who has to get hit with all of these shenanigans the whole time. He just wants a peaceful day, but he isn’t likely to get one.

Sebastian is definitely the best character here though. He has the hype song of course and aside from that he is always the guy who stays calm and collected. He does try to stand up to the King for a while even if the other characters in the film don’t really give him credit for that. He gets put into a lot of difficult situations and I don’t think we can fairly blame him for most of those. Stuff happened and he made the best choices he could under the circumstances. Then we have Ariel’s friend Flounder. He isn’t quite as resourceful or interesting, but he’s a nice guy I suppose. He’s certainly got Ariel’s back and tries his best to help her.

The King is definitely not as reasonable as some of the other Kings. He definitely isn’t willing to hear Ariel out after all, but at the same time she probably should have approached him about it first. I think we can reasonably assume from the dialogue that she did in the past though so even though I’m going in a loop here I ultimately have to pass the verdict that he wasn’t too reasonable. He also gets played like a fiddle against Ursula. He should have aimed anywhere else but at the scroll if he wanted to stop her.

Ariel’s a charismatic character of course even if she is a little too desperate to get to the human world. Everyone warns her that this is a bad idea, but she just won’t listen. She did make the right choice in saving Eric regardless though. Just letting someone drown is never the right answer. From there she was doing a good job at fulfilling her end of the bargain if not for Ursula’s meddling. She just shouldn’t have accepted it in the first place. As for Ursula, she’s definitely a pretty solid villain. She’s ready to win at any price and is totally content with playing the long game. Who knows how long she was waiting until someone like Ariel was finally ready to make a deal? She’s clearly gotten other clients in the past as well so her business is booming.

Overall, there’s a whole lot to this story and that’s why Little Mermaid holds up to this day. The action is intense and the graphics are quite sound as well. Throw in an excellent soundtrack along with a solid cast and you’ve definitely got a winner. I imagine that it’ll be tough for the sequel to match up to this one, but naturally I’ll hope for the best. If you somehow have not seen this film yet then I’d recommend fixing that straightaway. It’s definitely a solid title that I’d recommend to any viewer. You can’t go wrong here and at the end of the day it’s just a fun movie.

3 thoughts on “The Little Mermaid Review”