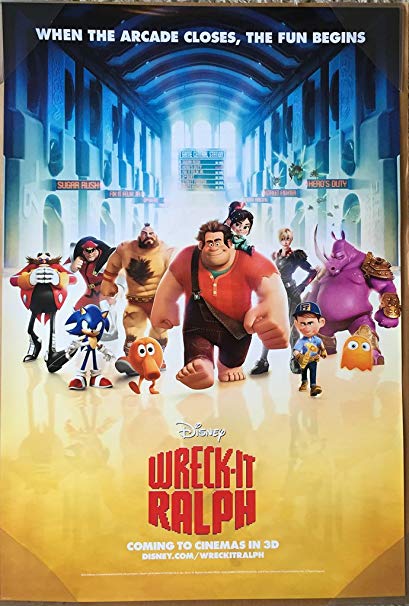 It’s time to look at a Disney film that came out a while ago. 2012 feels pretty recent at times, but it has been 7 years since then so I think we can say that this film is starting to get old. Still, it’s a title that definitely holds up quite well on the re-watch. There’s only one aspect of the film that’s a bit weak and I’ll touch on that near the end. Otherwise it manages to hit all the right notes and naturally it’s fun to have so many cool cameos.

The plot follows a guy named Ralph. He’s the main villain in the Fix It Felix arcade game that people go to the arcade to play. It turns out that all of the arcade games actually have real characters in them and they all hang out after the arcade closes. The problem here is the fact that nobody likes Ralph. They don’t realize that without him there would be no game. Ralph’s a nice guy and tries to get along with the others, but they just won’t have it. They tell him to go get a medal and then they’ll finally treat him with respect. Ralph agrees to these terms and heads off, but getting a medal may be tougher than it seems.

You’ll definitely feel bad for Ralph since the whole thing is definitely pretty unfair. He’s got to follow the game script after all and that’s how Felix is able to fix his way to the end. it’s definitely petty that nobody tries to help Ralph out. Even Felix certainly isn’t heroic with how he completely ignores Ralph’s plight. Even by the end it’s hard to take him seriously as a hero, but I suppose he learned his lesson.

One really solid part of the film is naturally the fact that they were able to get a bunch of video game icons to show up here. We don’t get Mario, but pretty much everyone else from Sonic to Pac-Man is in this one which is pretty cool. Keep in mind that these are just cameos so don’t start getting your hopes up for them to get a bunch of lines or anything like that. That’s not the point of the movie although I admit it would have been awesome if that did happen. The film would have instantly risen even higher had that been the case.

Another reason why the film is solid is the fast paced nature of the title. A lot happens during the adventure so the film never stagnates. Ralph’s quest is always evolving as he tries to get the medal and everyone stands in his way. He’s also a pretty solid lead who can hold his own feature. He’s certainly sympathetic and for the most part Ralph makes the right calls. I do think he was way too quick to bust up her vehicle though. That definitely wasn’t a cool move on his part even if he thought it was for the right reasons. Then we have his counterpart Felix who isn’t a good character. Felix may believe that he is a true hero, but as he never risks his life for the others I just can’t call him that. He doesn’t keep his head in the game either as he gets distracted by Tamora real quick.

That leads us to the only weak point of the film. Naturally I’m talking about the rushed romance between Tamora and Felix. That plot really didn’t need to happen and it’s a shame because Tamora had been so solid before that. It just seemed like a waste for her development as it also made her move on from the original wedding too soon. Ignoring the Felix stuff though she was definitely good. Tamora took down quite a lot of the bugs and showed why she is a capable leader. Then rounding off the main supporting cast we have Vanellope who is the best character in the film. It’s easy to see why she is a fan favorite as the girl never gives up. She is always ready to try again until she is able to achieve her dream of getting in the big race. Her quick wit also makes for a lot of fun dialogue.

In general the writing for the film was definitely on point. We have a lot of good one liners and solid banter between the characters. We also have good foreshadowing for the final boss of the film. It was definitely good to see this character show up and it’s still a very satisfying twist when you already know about it. It just makes this character get even better. While Wreck-It Ralph isn’t an action film we do get a final fight with the villain and Ralph. Lets just say that strength isn’t always enough to overcome an opponent.

It’s a short sequence, but I’d say my favorite part of the film is the action level in a Hero’s Duty. I think a whole film could easily take place here and it would work really well. The setting and plot are perfect for an epic adventure. It’s like Halo meets Metroid. It’s too bad that Ralph wasn’t quite ready for this one, but coming from a very tame Nintendo type adventure it makes sense that he wouldn’t be able to immediately run in and start blasting aliens. I think he’d do better in the sequel if he gets in the same situation.

The animation here is pretty solid. They did a good job of keeping the video game aesthetic for the characters. In particular Sonic stands out, but I also really liked the effects for the Hero’s Duty game. It definitely felt very intense and was a nice contrast to the Sugar Rush game that most of the film took place in. The film’s definitely got no complaints from me in that regard. Again, the only real weak point of the film was the romance. Additionally, maybe I’d say that there was some forced drama at the end with Ralph getting tricked by the villains. I think he could have talked things over with Vanellope a little bit better.

Overall, This was and still is a pretty fun film. I’d recommend checking it out. It’s definitely quite a bit different from the average animated film and you’ll enjoy it whether you’re a big video game fan or not. The games here are so iconic that you’ll likely have heard of them whether you’ve actually been to an arcade or not. It’ll be interesting to see how the sequel goes. I feel like it won’t be able to beat the first film, but I really don’t know almost anything about the sequel so it’s hard to say. I’ll be seeing it very soon so you can expect a review for that one within the next few days.