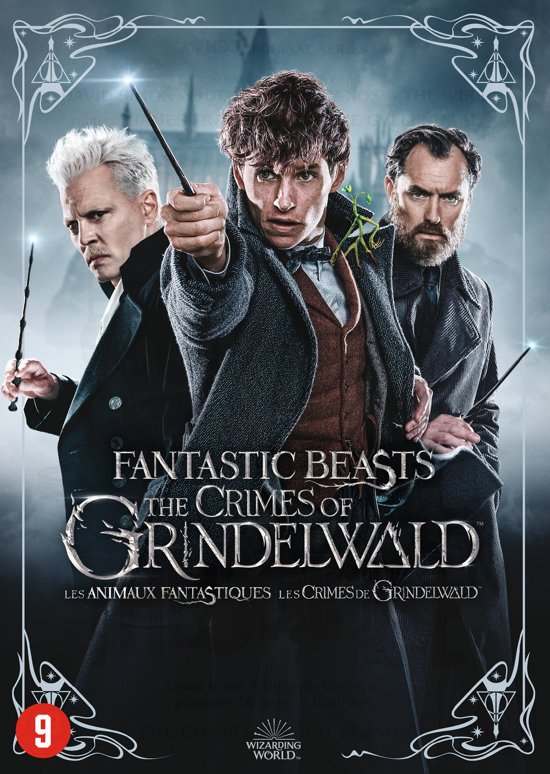 It’s time to look at the second Fantastic Beasts film. I’m really still not sold on this series. Try as it might, this title just isn’t nearly as fun or interesting as Harry Potter. I can’t think of a single way in which it matches up. The title doesn’t even make any big mistakes like animal violence or being super violent. There isn’t even any fanservice to speak of. The main problem with Fantastic Beasts is just the fact that there currently aren’t any real likable characters. Everyone’s just fairly annoying and so without anyone to root for the film becomes less engaging than it should be.

The film starts off with a flashback as Grindlewald escapes confinement along with one of his henchman and begins to amass his army of followers. We cut to the present where Newt refuses to join the Wizarding army and has his VISA denied. He makes contact with Dumbledore who tells the kid that he must do one of two things. He needs to either take down Grindlewald (HA!) or he can find Credence and prevent him from turning to the dark side. Newt agrees to do this, but quickly gets sidetracked by a romance plot involving Jacob and Queenie which takes up a large chunk of the film. Meanwhile Grindlewald has to get Credence to he can destroy Dumbledore. To accomplish this he prepares to unleash some spectacles on the world which will wow the people with low will power to his side.

Quickly we’re gonna jump way out of order and talk about the ending. The film had the perfect chance to salvage the whole 2 hour experience with a single line. Grindlewald is explaining to one character what his true name. The final line of the film should have been “I now dub you…VOLDEMORT!!!” and then have the film end with an extremely loud guitar solo followed by some fast paced rock music. The revelation would have shocked everyone to the core because of how little sense it would make but it would have been absolutely amazing. I would have gained so much respect for the film. It would have finally tied into Harry Potter.

See, that’s one of the big problems here. This spinoff is like Attack of Titan Before The Fall. It really has almost nothing to do with the real series. Sure, Dumbledore is here and Nagini finally gets to appear, but their roles are pretty small so far and it’s not like they were huge characters in the main series. I want to see Harry or Snape! Too bad the prequel takes place so far in the past right? So, really the prequels need to try and develop their own series so they can be a solid entry in their own right without tying into the present. the problem is that the story’s just not interesting.

It’s a shame because at the same time I do appreciate the ambitious nature of the film. It may sound contradictory, but I think the overall plan for the film wasn’t bad, it’s just that the execution was painful. This film is clearly trying to throw in a bunch of plot threads which will all get wrapped up in the future. It can work out really well like in the old Spider-Man comics where at one point you had almost 10 different subplots going on in the background. When handled right it makes each issue a whole lot more exciting or in this case it would help the future films. There would be so many characters running around in the background that it would keep you really hyped. The problem is that this only works if you really enjoy the characters or find the plots engaging which is what the film fails to do. It’s more focused on the plot than the characters and you gotta have both. I do think huge fans of the Harry Potter lore may still be excited about all this, but it really wasn’t doing much for me.

The Ministry of Magic is really stuffy and antiquated. There’s no reason to root for them because their rules aren’t very sound. They are determined to keep the magic and human worlds separated to keep the balance so it’s no wonder why people are betraying them. They are trying to rule over everyone and that never goes well. All they do is hold each other back like when they shackled Dumbledore. The cabinet leader admitted that the principal was the only one who stood a chance against Grindlewald and even then he did this. The group makes no sense so I agree with Newt on not joining them. Still, they are the lesser of two evils so lets keep that in mind.

Then we have DUMBledore. All right, maybe not all of this is his fault, but we can blame him for quite a lot. That bloodpact he made a long time ago is really causing him trouble here. Even if he can’t attack Grindlewald directly he can still attack his troops. After all, Grindlewald has absolutely had no problems attacking Newt and every other hero here. Seems to me like Dumbledore is hiding when everyone was counting on him the most. He gets a tremendous amount of hype here, but he has yet to do anything of note. All he does is teleport and run around a lot. He also needed help getting the cuffs off. At this point in his career Gandalf had done more to prove himself so Dumbledore better shape up.

As for Newt, I still don’t like the guy. He’s constantly acting petty and being a downer in every single situation. He never explains himself and always has a sulking expression on his face. The guy’s too timid to be the lead and his magic skills don’t seem terribly advanced. He seems like a nice enough guy, but someone who should really be a member of the supporting cast and not trying to be Harry’s successor. Tina is the main heroine (Well, debateably. In the first film it was unquestionably her, but her role is reduced here) and she is a lot more interesting. At least she is actually being very pro active in trying to stop the villains even if her progress is quite slow like the others.

Then you have Jacob who gets mind controlled in his first scene. Don’t worry, he’s not being used as a hostage or anything, but he might as well be since he was nearly forced into marriage. By the time the spell breaks he tries to recover, but I think he could have been a little stricter with Queenie about not doing that again. He’s just not safe as she can dominate his mind at any point. Meanwhile, Queenie makes no sense here. Why show up at Newt’s place when he would obviously know that a spell was active? She should have gotten married first if she actually wanted to get away with the plan. She also has low will power and makes all of the worst decisions in the film. She definitely had a very different character arc than what I was expecting. It’s handled pretty well, but there’s no way I’ll be a fan of hers after this.

Then we have another plot with Credence and Nagini. Credence is one of those characters that everyone is hunting for different reasons. That can go down an interesting path of course as it’s always interesting seeing what side the character will choose. Unfortunately Credence has about as much agency as a pawn in Chess and just goes where the flashy colors are. In this case they belonged to Grindlewald so that’s it for him. He seems like the type of character who will be manipulated with ease. Nagini’s certainly a lot more interesting although I can see this being the start point for her descent into darkness.

Then we have the main villain Grindlewald himself. The film sets him up as being the big villain right away as even children aren’t safe from his terrors. He’s certainly got big goals, but is taking his time in going about them. Since he’s apparently the strongest sorcerer out there I’d like to see him make some more direct moves soon. I know that with magic there are a lot of convoluted reasons on why they must wait, but he needs to take the stage more. Just look at the climax. He murdered a bunch of spell casters with ease just with a single spell. He nearly took down all of Paris! If it’s that easy he should just keep blasting away. I get the feeling that he’s going to have some pretty big fights coming up.

The effects here definitely look really good. The magic spells are on point and the aerial fight with the lightning bolts coming down was definitely handled really well. More fights like that and the film definitely would have went up. The movie is at its best when we’re getting magical battles like that. Unfortunately they are few and far between. It does show the potential of the series though as we could potentially get more moments like that which would be very cool. It’s definitely jumped up visually from the last film. That’s a good thing since the average scenery in this film isn’t all that fun to look at. It does take place in the 1970s I believe though so that’s likely intentional. The effects are what you’ll be looking forward to.

Overall, I would have liked the film to have had some court scenes given that the title is literally referencing Grindelwald’s crimes. Instead he doesn’t do a whole lot after he escapes. The big climax at the end is pretty great and certainly the best part of the film. The characters all have to make a choice and it does set the stage for the third film to be the big payoff moment for a lot of characters. At the same time, this title really dragged its feet the whole time and still hasn’t given us a reason to root for most of the cast. I dare say that most of the Harry Potter characters had more personality after 1 film than these guys have after 2. I’ll stop comparing the two titles now, but Fantastic Beasts really needs to step it up. The review probably sounds pretty negative, but I’d still give this one a positive score. It just feels like empty world building right now and so there’s very low replay value. It still makes for a good initial watch though. I’d recommend checking it out if you like fantasy titles or are a big Harry Potter fan. That’ll let you really get the most enjoyment out of this title.

1 thought on “Fantastic Beasts: The Crimes of Grindelwald Review”