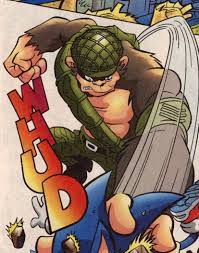 Suggested by Anonymous Sergeant Simian may be one of those fighters who doesn’t back down, but he really doesn’t stand a chance against Sonic. Sonic’s got super speed at his disposal and we also shouldn’t forget that he does know how to fight. Sergeant Simian will quickly realize that he is a little out of his depth here. Sonic has various super forms at his disposal like Super Sonic and Hyper Sonic. With these forms under his belt there really isn’t much that Sergeant Simian can do to damage him. He’s simply too slow. Sonic wins.