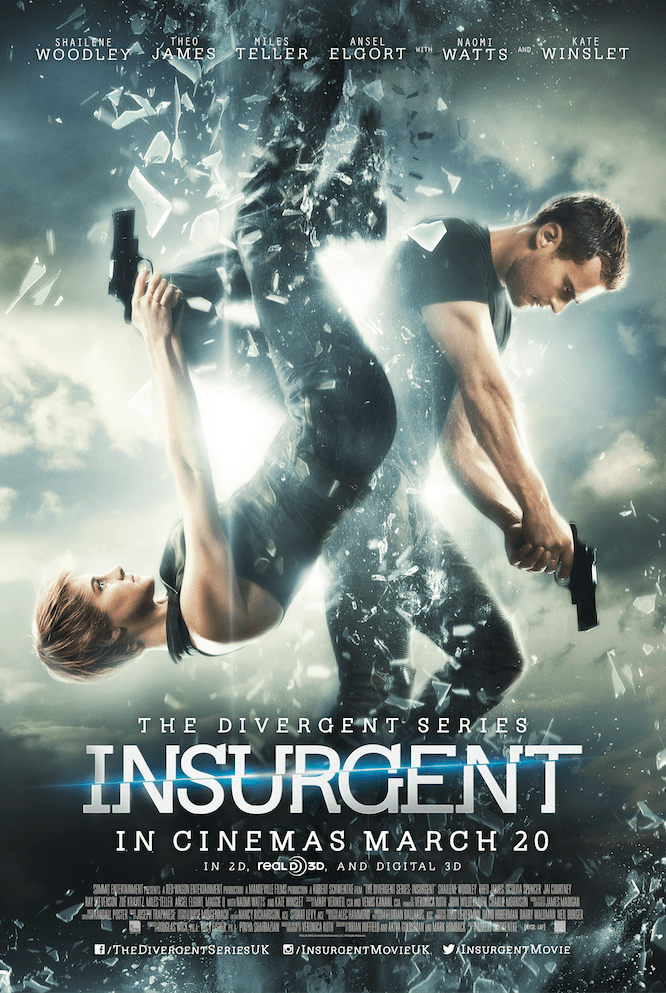 Time to jump into the sequel to Divergent! As you likely read in my last review, the series is off to a good start so the question is really whether or not the sequel could manage to keep up the momentum. Well, I can safely say that it did. It continues to harness the same level of energy and makes for a pretty fast paced sequel. I do feel like the third film is going to be the one that has a hard time keeping up since this film basically ends the main plot. The third film would be starting a whole new arc and since it’s the last film there isn’t a whole lot of time to finish it.

The second film picks up pretty much right after the first one ended. Jeanine isn’t happy about how things have turned out so she has just made it plain and clear that she is taking over the world. She does so under the guise of justice though so people are pretty cool with it. The only faction that didn’t like her has been wiped out anyway so they don’t care much. Four and Tris are still on the run and decide that they need to meet up with the rest of Dauntless to regroup. Along the way they’ll have to deal with faction-less gangs as well as get past other factions and a peace group to reach their goal. Once they make it they’ll have to then decide how to handle this situation. Do they start a civil war and take Jeanine down or just flee the country and risk seeing what is hidden beyond the borders? I don’t think I mentioned it in my last review, but in Divergent the world is surrounded by a lot of large walls. Supposedly there is nothing beyond those walls except for deserts, but most of the characters don’t believe this.

The film starts up with the characters hiding among a group of peaceful people who don’t want to take a side in the current situation. That’s rarely a choice in these things though so they are just prolonging the inevitable. The heroes can’t stay long though since Peter picks a fight and Tris nearly murders him. It does help them see Peter’s true colors though and the heroes fight their way out and onto a train. This leads to another action scene where they are forced to take on the whole crew. Both of them do a good job of holding their own here. Tris and Four take down a significant amount of enemies, but ultimately are not on the winning side here since they are simply too outnumbered. They would have been in a better spot if Tris’ brother Caleb had actually been helping more, but he was too scared to act. It’s a solid action scene though and definitely gets the film off on the right note. That’s already quite a few fight scenes and the film had only barely started.

Caleb never quite recovers though. I didn’t like him in the first film and he is significantly worse here. Being afraid of the villains isn’t a bad thing, but when you’re so afraid that you’re willing to let them murder your family that’s when things have gone too far. He should definitely be pretty ashamed after that and then he makes all of the wrong calls as the film goes on. By the end of it you just can’t like this character. He quickly sinks to being one of the worst characters in the movie.

Meanwhile Peter gets a bigger role here and he continues trying to be as unlikable as possible too. He antagonizes Tris quite a bit, but since she is such a quality character she shuts that down real quick. Not only does she completely overwhelm him in combat, but she scares him enough where you know he won’t try picking another fair fight with her again. An extra second and he would have been down for the count. Peter comes across as fairly petty though since most of his latter scenes seem to be direct retaliation against her. He never seemed like a trust worthy ally though so it’s not like this is surprising.

If you think about it there are probably more antagonists than heroes in this film. You’ve also got Eric who returns again and is still the villain who appears the most. While he isn’t the best fighter compared to the others, he usually has some kind of advantage to help him. The mind control serums and knock out gas still work as well as ever and he’s always got a gun. His fight with Four goes as you would expect though and was handled really well. It definitely made Four look good. Jeanine is still a solid villain, but she does appear to have lost a lot of her intelligence here. She’s very obvious about how she doesn’t care for her lackeys and that’s not a good idea when you put one of them in charge of your entire security system. At least pretend to be looking out for that guy or just destroy him otherwise. That felt like the beginning of the end for her.

Four and Tris are pretty consistent with their first appearance. Four still makes it clear that he’s here to protect Tris first and save the world second. I’m glad that he doesn’t hesitate in heading over to save Tris and just leaves the compound. He has the right priorities there. While I’m definitely still not with the romance now that it’s already a thing it’s naturally less forced than in the first film. It’s more or less just how things are so it’s not really a matter of questioning its inclusion now. Tris goes for the classic action star haircut here which seems to happen to most protagonists at some point or other. I’ll definitely miss the more Metroid esque look, but it’s not like it changes her personality. She’s still just as tough as always. Just as she was ruthless in combat during the first film she definitely doesn’t hesitate here and continues to be one of the better heroines. She definitely goes through a lot here since her allies keep dying left and right. That’s why it’s tough being the toughest person in the room since its inevitable that you’ll see some allies get taken down along the way.

Christina gets less of a role here than in the first film. She spends a lot of it being fairly upset, but ultimately handles it well. It’s hard to blame her since being directly lied to is never any fun, but at the end of the day she still helped out when necessary and didn’t try to get revenge on Tris or anything like that. I don’t think you could ask for a better reaction to her situation. Four’s parents show up and his Dad is still pretty bad. He’s the kind of character who absolutely can’t be redeemed at this point and I think the film knows it. He half heartedly attempts to bridge the gap to no success. The Mom in comparison doesn’t seem nearly as guilty. Of course leaving Four wasn’t the right call and she should have found a way to take him, but at least she wasn’t actively being a villain. The film is definitely hinting that she is a dangerous character though so it’ll be interesting to see what she does in the third movie.

All of the strengths from the first film carry over to this one. The writing is pretty solid and the core characters are good. We get a lot of nice action scenes which definitely hold up and the pacing is solid. The film doesn’t drag on and it avoids making any big mistakes. It does have more emotional moments than the first film which do slow the film down to an extent, but I don’t think it’s overplayed. You do feel bad for the random dude who shows up to talk to Tris when she’s down though since you know that he’s dead right away. This is the kind of film where you just know that the no names are doomed as soon as they start to talk. Any divergent who isn’t Four or Tris is also typically doomed since none of them are all that smart. If you notice that everyone is acting evil and mind controlled you should probably pretend to be under the spell too instead of wandering around looking confused. One of the kids also doesn’t look good since she disobeys orders, but as she’s a kid you can’t be quite as harsh I suppose.

The dream sequences for the trials are still pretty fun. We get quite a few of them and Tris gets to show her determination each time. Even when there’s one simulation that is obviously not the real world the film handles it pretty well so people who are new to the genre could potentially fall for it. Tris also gets random nightmares throughout the film. These aren’t quite as interesting visually or even in context, but it does show up the events are messing Tris up. In such a hopeless world I imagine that most of the characters are pretty messed up by now. The best of the training sequences is definitely Tris trying to save her mother from a burning building. It depicts her determination pretty well and I still remember seeing that part in a trailer which is what made the series look interesting in the first place.

Of course the best sequence in the movie is also in the dream world. You can call it the final test/sequence, but basically Tris has to fight herself in the simulation. The effects here are awesome and it’s like a fight out of Man of Steel. You can feel the intensity behind every hit and by the end of the match you are definitely fully on board with that being the definitive scene. I’d like to have more fights like that, but realistically it isn’t likely. I’m just glad they were able to put in such a cool fight.

Overall, Insurgent continues to keep the series on track. Again, I do think the third film may have a tough time since I feel like the upcoming plot wouldn’t be as interesting, but there are countless ways the movie can go from here so I suppose I can’t really say that with any confidence. I’ll go into the next movie with an open mind ready to see what they’ve got in store. While you could probably watch this film and understand everything without the first it’s definitely the kind of trilogy where you are meant to watch it in order. More so than most of the other trilogies these 2 films at least feel like one big story that you’ll want to watch almost back to back for the maximum experience.