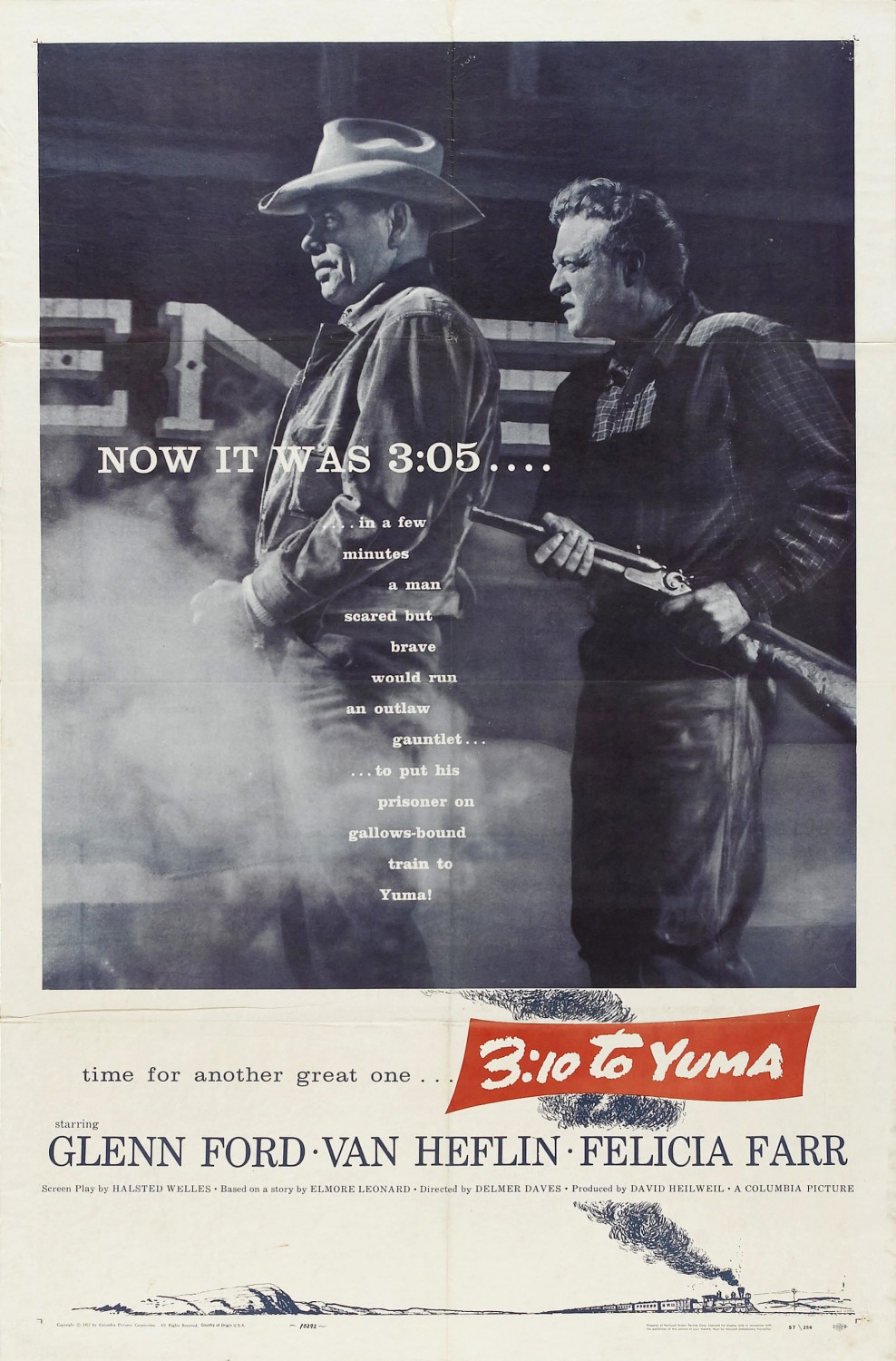 It’s time to look at an old wild west film. This is one of those films where the villain and main character exchange a lot of witty banter while casually trying to off one another. It’s not really personal between them. One just wants his money and the other wants to keep his life. It’s a fairly entertaining film although some parts are pretty unrealistic like the ending. You’ll just have to try and brush that bit aside.

The film starts with Ben and his gang holding up a group of travelers and stealing a bunch of dough. One guy started moving a little too much so one of Ben’s men shot him. The gang then rides off into down. Dan and his kids witnessed the event and his wife subtly pressures Dan into going into town for revenge. She feels like he should have done something while on the hill although realistically the only thing he could do at that point was get shot. Well, Dan heads into town and actually managed to get Ben at gun point. The rest of the gang are in other towns at the moment so the plan is for Dan to get Ben onto a stage coach in another town and then he’ll be in prison before the rest of the crew arrives. Dan not going to all of this trouble for petty revenge. He’s doing this because Butterfield has promised him a nice reward and Dan needs the money for his farm. Right now he is in a dicey financial situation.

As always the film reminds you that all of the town inhabitants are cowards who are afraid to fight even when they have the numbers advantage. You should see how quickly they run when Ben’s men are rumored to be showing up. Even though it would have been something like 18 vs 12 heroes to villains they quickly run off so before long it is 2 vs 12. It’s annoying for Dan because from the start Ben tells him that they’re all going to run away and it turns out that he was right. Even Butterfield loses his nerve by the end. A good deal of the film is then about Ben trying to convince Dan to let him go by playing on his weaknesses.

Dan stays strong which is good because he’d have to be a grade A sucker to fall for such a ploy. There is no way to guarantee that Ben would get him the money or even that Ben wouldn’t murder him. There is nothing to force Ben to do anything once he leaves so trying to do something would be futile. At that point it’s better to just get shot and get that part over with. Still, Dan still has to deal with a bunch of outlaws on his own now.

There isn’t a huge supporting cast, but it’s a decent one. I liked Butterfield even if he wasn’t the bravest guy out there. He still did last for quite a while. Then you’ve got Alex who stayed strong the whole time. He suffers a pretty painful death so you wish Dan would have been there to help. Instead he’s basically hiding in the room with Ben where he makes a bunch of mistakes that are almost fatal. At least he doesn’t crack like that one guy who ran into the room to murder Ben and just made the situation worse.

Dan’s a reasonable main character. I’d say that his decision to stand down when seeing the other guys start robbing the carriage was the right call. Perhaps if he was by himself he could have done something but with 2 kids right there it wouldn’t be right to put their lives in danger. After that he does pretty good with taking out all the villains and completing his mission. It may not have been all that realistic but Dan did his best.

As for Ben, I wasn’t sold on the guy. The movie does its best to try and make him sympathetic by the end but I’m not buying it. The guy’s basically a criminal/murderer who just so happens to like the bar tender Emmy so naturally he is nice around her. Even the worst of people have someone they like so that doesn’t suddenly make them a better person. Ben is still a criminal with crimes that have been accumulating for years. I also fully expect he would have taken Dan down if he had grabbed the gun early on. So his big change of heart at the end of the film doesn’t make much sense. It’s even worse when you realize that he is going to be executed once he gets to the next town so he probably shouldn’t be so chipper. Maybe he thinks he can get out alive, but that’s a long shot.

It goes without saying that his romance plot with Emmy is not handled very well. It all happens so suddenly and never feels like it was all that realistic. They just hit it off immediately which is a nice sentiment of course, but it just makes you assume that Emmy is fairly easy and that Ben’s probably pulling the moves in every town he goes into. That’s really the only implication you can make after such a subplot and it also made Ben not look very smart since he should have known that staying in a town where he just robbed the civilians would not end well. The guy was definitely pretty overconfident.

The final fight is fun, but the hero is way too outnumbered. We’re supposed to believe that Dan is taking out an entire squadron all by himself while dragging Ben around. The villains keep missing their shots, but they really should not be. People start missing shots at point blank range and then you realize that things are really getting dicey.

Overall, 3:10 to Yuma is a good film. It’s got its flaws and I don’t really think there is a lot of replay value here, but it’s a good first time watch. You’ll definitely be wondering how things are going to play out even if you won’t be surprised at how the townspeople falter when it really matters. As it stands you think they would at least recognize when someone doesn’t belong. There is one scene where it turns out that one of the villains was sleeping nearby and nobody recognized him. It’s also interesting that the sheriff would take all of the cops and leave while there’s a whole crew of murder suspects staying in town. Sure, he waited til they started to leave…but that’s pretty bold. The heroes make questionable decisions for sure, but I suppose that is why this is the Wild West.