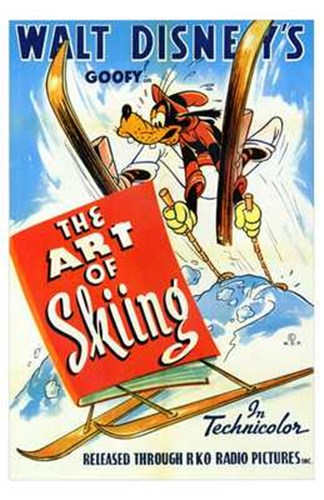 It’s time for another Disney short. Goofy doesn’t tend to hold his own quite as well as Mickey of Donald, but he’s had some good ones over the years. This one was not my favorite though. It’s another one of the tutorial shorts as the special explains what Skiing is and how to do it well. The problem in my opinion is the narrator. He explains what it happening the whole time, but it feels a little unnecessary. If he just let the visuals speak for themselves then I think this special would have been alot more solid. You really don’t need someone to be explaining what is going on since we can see all of that for ourselves. It really doesn’t add to the bigger picture and it doesn’t help the humor. It’s like when someone says a joke and another character tries to explain it. Explaining the joke just makes it sink even more.

The special is mostly a lot of slapstick as everything goes wrong for Goofy before he finally heads home and calls it a night. You’ll feel bad for Goofy since he really didn’t want to go and skii, but was forced to do so. The guy was just looking forward to enjoying a nice day of sleep and relaxation at home, but ultimately that was all shot down. He was pressured into taking action but at least he got to escape in the end. I think what could have spiced things up here is if Mickey or Donald showed up and were experts at Skiing. Maybe have them show Goofy how to do it or something like that. I think that would have worked out pretty well.

The animation is very smooth as always. All of the scenes flow together and the animators definitely showed a lot of skill here. The scenes all transition into each other very well. Then the special is pretty quick so the pacing isn’t bad. Even if it wasn’t all that interesting for me, it’s only like 3-5 minutes so it’s not as if you’re spending an hour here or anything like that.

Overall, The Art of Skiing can’t quite keep up with the other Disney shorts. It didn’t help that I saw it right next to the cool Donald one about Hockey. My favorite tutorial is probably still the Basketball one although Football was close. I think there’s just less to poke fun at with Skiing so that hurts in a parody tutorial setting. This one actually may have played it straight in comparison with the joke just being that Goofy wasn’t very good at it. If you want to watch a quick short about Goofy then this is a fun one to check out. Otherwise I would say that you’ll be better off watching almost any other Disney short.