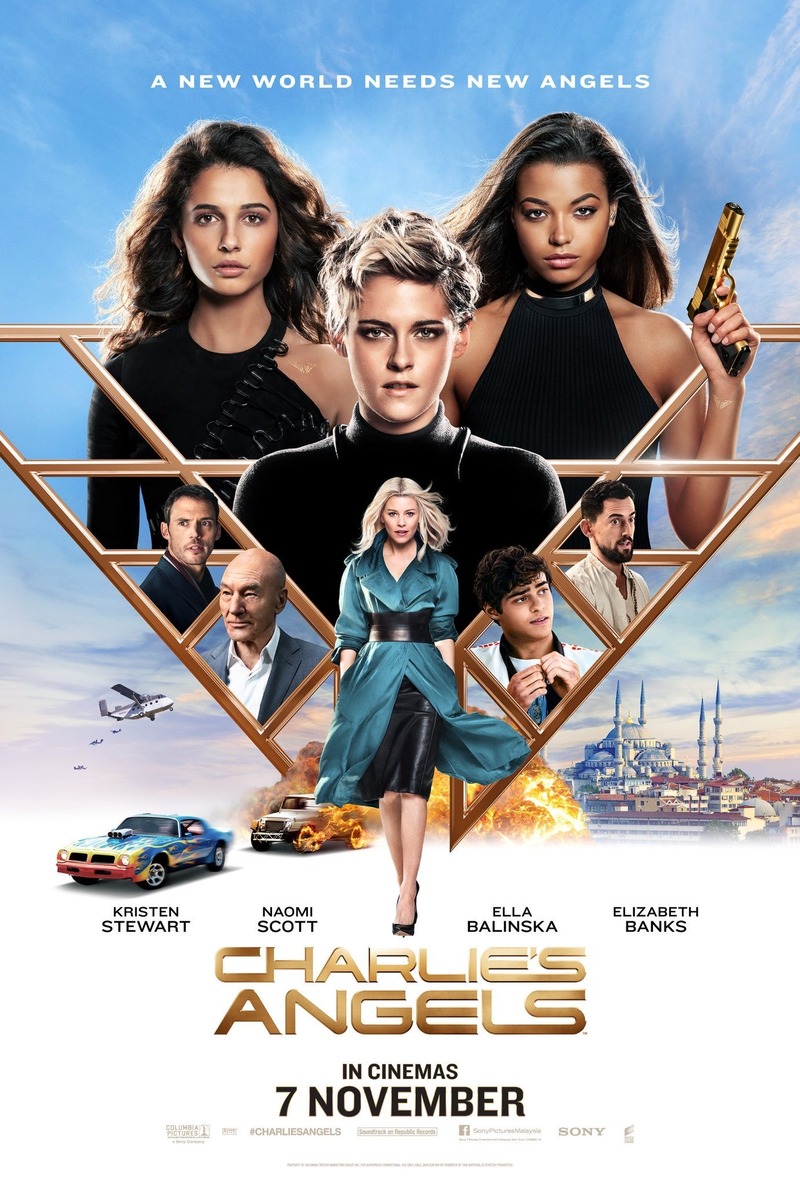 It’s time to look at the recent sequel/practically reboot of the Charlie’s Angels series. The first two titles didn’t exactly get glowing reviews from me so it wasn’t going to be hard for this one to win. Sure enough, I’d say that this is the strongest film in the series. It definitely does still have its flaws though which ultimately stop the film from reaching its full potential.

The film starts off by introducing us to the Angels as they take down a group of villains. It’s become more and more common for films to start off with an action scene and it’s always a smart move. We then meet Elena who finds out that her company is going to move forward with introducing some dangerous tech into the world. She alerts the Angels to this, but now some powerful people want her dead. This situation could be a whole lot bigger than it appears and the group will have to pull out all of the stops to win.

On the positive side Charlie’s Angels does bring the high level action scenes you would expect from the series. Pretty much any fight with Jane is top notch. Sabina also has her share of action and once the film’s climax begins there are a lot of nonstop action scenes. There is also a very large array of songs in the soundtrack. Not all of them are hits, but it does give the film some extra energy. Music’s a pretty important aspect in a film even if it’s been dying out lately.

Jane’s definitely my favorite character in the film. She’s certainly the most serious of the Angels and the best fighter. Jane gets one of the main subplots here as she goes up against the assassin Hodak. They have a lot of fights back and forth and this was the most interesting plot. Sabina’s the rebellious member of the group who always puts on a tough act. Her bark tends to be worse than her bite, but she can fight fairly well. Her overconfidence costs her quite a few fights though and while she treats Elena like a newbie, I don’t feel like she is very experienced either.

As for Elena, she’s not bad, but certainly a step behind the other two. The whole “rookie” personality is a little played out and just not quite as entertaining as the other two characters. Her fight with the guard is a little on the cheesy side as well since she has absolutely no fighting experience. Sabina and Jane should certainly be taking these guys down, but not Elena at the present moment. Then you’ve got the various Bosleys running around. They aren’t fighters on the ground like the Angels so don’t expect a lot of action from them, but they are pretty important to the plot.

Hodak also makes for a great villain. He’s definitely the silent, but deadly sort of guy. His skills are the real deal with how good he looks throughout the movie. He’s the best fighter here and always comes prepared with a lot of guns and armaments. Right through the end he never really loses his cool and just keeps on fighting. You can tell when his role is about to be up, but regardless he served his purpose as a really solid villain. Perhaps not quite as great as the ex angel from the original films, but very solid nonetheless. Peter is also a fun villain even if it’s more in a campy way. The guy’s about as obviously evil as you can get and the film doesn’t bother to hide it. The only question the viewer has to ask is whether he is competent or not and as the film leaves you guessing on that I will as well. At the very least you have to admire his confidence.

The film is around 2 hours, but it doesn’t drag on. There’s always something happening around the corner. It’s an enjoyable ride, but I think it’s time we take a look at the negatives. While I said that an action scene is the right way to start on principal, this film’s opening segment started off on the wrong foot. Right away it’s about one of the Angels using her feminine wiles to get the enemy to let his guard down. It’s a sad trope that always seems to happen to the female agents. While this is surprisingly not used much later on unlike the first two films, it was definitely a scene that was not needed. I’d go as far as to say that the first scene is the worst one in the film.

Beyond that, the film actively goes out of its way to make the Angels look bad at times. They mess up on the missions very frequently even if they act as if they had won. The first scene is an example of this as Sabina manages to tie up the villain…only to dramatically free him so she can get a good punch in. Naturally this leads to him overpowering her and getting his second wind. At another point Sabina has someone at gun point and tells him not to move. The guy naturally reaches in his pocket and takes out a bomb which knows Sabina back and he escapes. She loses consistently throughout the film and one villain ends up defeating her twice. Even in her final big fight of the film she doesn’t seem to have the edge.

I’ll cut Elena a break since she’s new. Jane mostly takes care of business although her speech in the final fight wasn’t really deserved. She goes into depth about how she’s so much better a fighter than the villain, but he had been winning the entire time and she had help. The only person she’s fooling there is herself as in a 1 on 1 the film made it clear that she would have lost. Finally even one of the bosses looks bad. I know the higher ups can’t fight, but this character was talking a big game throughout the whole movie so to lose like that wasn’t a great moment.

There are a few twists and turns in the movie and it does a good job of masking them. At the very least there was one big twist which was handled well and the ending of the film is pretty satisfying. While not everyone gets a happy ending it works out pretty well even if a sequel doesn’t end up coming out. The ending scenes during the credits even finish up someone’s character arc so you’ll want to make sure you stick around there.

As far as the writing goes, the film’s not great. While the scene of the heroes running through the villain base trolling the police officers (I doubt they were all corrupt so you’ll probably feel bad for a bunch of the ones that get knocked around) could be entertaining, it’s not all that realistic. Why didn’t the guards just lock down the facility? That would have instantly been game over for the heroes. They also acted as if the cameras weren’t on at times as they would just forget to use them. The Angels are also partially to blame here because they should have made sure that the guys with the IDs they were using wouldn’t try to get back into the building. I would have figured they’d tie them up or something.

There is also a bit of a romance here which isn’t handled all that well. It’s rather cheesy and considering that the heroes were in a hurry it does feel like a waste of their time. The guy didn’t seem terrible (Even if he couldn’t open a simple package of condiments. Yeah, most of the guys here don’t look great) but he didn’t really have any point being in the film. That’s why the writing is a mixed bag. For every fun scene or likable character there’s going to be a heavy handed moment without much thought to how this situation would occur to counter it. It can be fun to think of the various plot holes or just moments of heroes messing up as you’re watching though.

I wouldn’t consider this next part a positive or a negative, but it’s interesting to note. While the Angels are always portrayed as heroes in the first two films, it’s a little more gray here. They really don’t seem to mind murdering people and even find it amusing at times with all the jokes they crack about it. You’ll get a pun after someone is impaled or characters sarcastically scoffing at murders in the background. One guy gets the honor of being murdered fairly early on and while the film goes out of its way to establish him as a sketchy character you’ll still be a little surprised at how readily the Angel just let him perish. She could not be bothered to try and save him. Realistically it would have been difficult but it’s a bit of a running theme usually used for humor so you’re not supposed to take it seriously though….

Time for a quick comparison to the original two films. As mentioned earlier this one did win overall, but the original films did win in two areas. I thought they still had the better soundtrack (listening to their battle themes while writing this review) and the fights were better. The battle scenes in those films still hold up quite well to this day. This film’s just got a stronger character cast and way less fanservice which ultimately won it the deciding blow.

Overall, Charlie’s Angels is a fun popcorn type film, but not one that really excels in any areas. There’s a lot of replay value and it would be easy to re-watch even after just a short while. That’s because the film’s just very high energy with some decent banter. The questionable writing does hold it back though. Some parts are just not too believable and I think the Angels should have looked a lot more competent. The film seemed like it was aiming to make them look good and I think it just messed up a bit there. If you’re looking for a fun action film to check out then this could be the one for you. If you want an action title with a bit more substance then check out Mission Impossible.