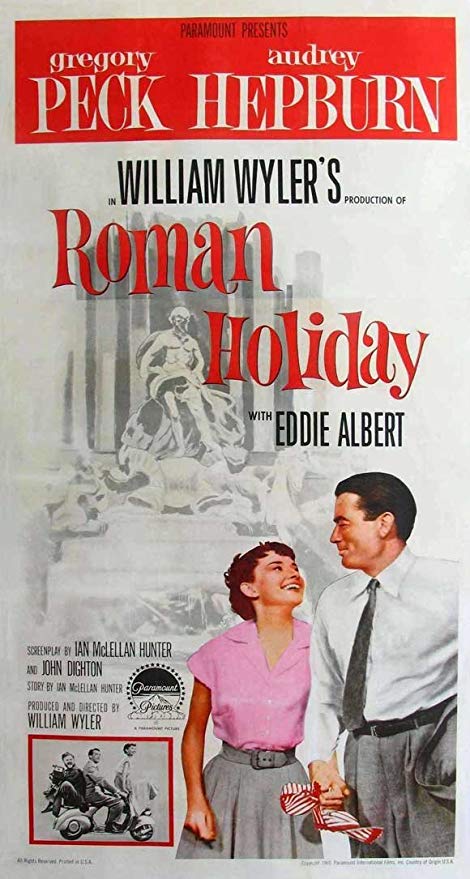 Time to look at a pretty classic rom-com. It’s certainly a movie that just about everyone should be familiar with at this point. That being said, I didn’t know much about it beyond the title so it was a new experience. I would consider this to be one of the best films in its genre. It does a good job of capturing the positives of both genres without dragging itself out or taking things too seriously. The ending is also well done.

The movie starts with Ann going through yet another boring event of having to shake everyone’s hands. Given how many people there are in attendance she has to stand for hours just doing this. Ann does a good job of putting up with all of it, but she wants a day to herself in the town. After trying to ask politely she escapes on her own and has a merry time. Unfortunately the sleeping drugs end up knocking her out. This leads to the other main character in the film, Joe. Joe sees that Ann isn’t in her right state of mind on the bench so he hails a cab and tries to get her home. Unfortunately she is unable to really explain where her home is and he doesn’t believe that it would be the castle so he takes her with him. The next day he wakes up too late and misses his official meeting with the Princess, but realizes that she is actually Ann. Now he is determined to write a big undercover scoop to give to the press so he’ll pretend to be her friend for a day. Can he really go through with such an underhanded plot?

When the movie starts Joe isn’t portrayed as the nicest of guys. It’s not that he’s antagonistic or anything, but the guy just wants to get a good night’s sleep and doesn’t really want to bother with a super tired/possibly drunk person right away. He doesn’t even offer Ann the bed and has her take the couch. After he learns she is a princess he is a lot nicer of course, but eventually it goes from playing a role to actually being a nice person since he likes her. They hit it off as good friends, but with their social circles it won’t really work to stay together. It depends on the kingdom of course, she could possibly pull it off depending on how much pull she has, but it would be a lot for Joe to hope for.

Joe’s plan to expose Ann by pretending to be her friend may be rather standard fare for someone in his line of work to get such scoops, but it’s still good that he abandoned that idea before it was too late. I think that’s the kind of plot that would have made the film a little too mean spirited. Even if he apologized afterwards it would be too late since the damage was already done. By not actually going through with this it makes the film a whole lot more enjoyable to watch. It still brings tension into the film, but without overdoing it.

Meanwhile Ann is a fun character. The sleeping drug may have been a little too effective for the sake of the humor scenes at the beginning, but when she’s in her right mind Ann is a very reasonable character. Really her goal isn’t so bad. She just wants to be normal for a day and that’s something her kingdom should have let her accomplish as it would have saved them a whole film of worry. As long as you have bodyguards undercover it shouldn’t really be much of a problem. Ann isn’t overly oblivious to normal customs so she’s handled realistically.

It’s also a fun dynamic of lying as she and Joe are lying to each other throughout the entire film. Even if it’s not direct, all the time they both have to live out the lie once they started it. Neither one of them wants to spill the beans or the day could be over in a flash. Of course it’s difficult to keep a lie up forever so little chinks in the stories eventually start to appear. Since Joe knows the truth from the start it’s a lot more obvious from his point of view though.

Then there’s the friend Irving who is definitely given a tough time here. Joe ruins quite a few of his outfits and the guy even takes some hits. Irving can be a little oblivious to why he is being attacked though and especially the second time it happens. Both of these scenes are definitely a lot of fun though and easily some of the best moments in the film. He was a good supporting character and ultimately a good guy as well. He didn’t get to hang out with Ann quite as much as Joe but was still able to toss aside his financial dreams to do the right thing.

As for the romance, it’s considerably better than the average ones you see in a film. It’s still on the rushed side when you take into account that they’ve only known each other for about a day though. So I won’t give it a pass, but it doesn’t take away from the film all that much and isn’t a huge focus. Most of the time it’s really just the two characters hanging out as friends and checking out all of the sites in Rome. We even get a nice action scene with the guards where Ann gets to land some hits as well. They were considerably outnumbered, but still took down a lot of the enemies and it was a pretty nicely handled action scene.

The writing is part of what makes this movie shine. The dialogue is quite strong with a lot of fun little jokes hidden in the conversations. All of the characters are realistic and even ones who only appear for a few minutes get to be quite likable. One example is Joe’s boss who sees through the lead’s bold lie and strings him along for a while. I was impressed that the boss was portrayed to be so smart here as half the time they tend to be oblivious.

Overall, Roman Holiday is a film I would recommend. Certainly if you’re looking for a nice romantic comedy this is a movie that fits the bill. The plot of a member of royalty deciding to see how the citizens live is always a premise with a lot of potential. This one really did a good job of handling it and the movie is really over in a flash. I don’t really have any complaints with the movie. The character cast is strong and the blend of humor/serious moments is just right. The ending is also good since it’s pretty happy without being unrealistic or too cheesy.