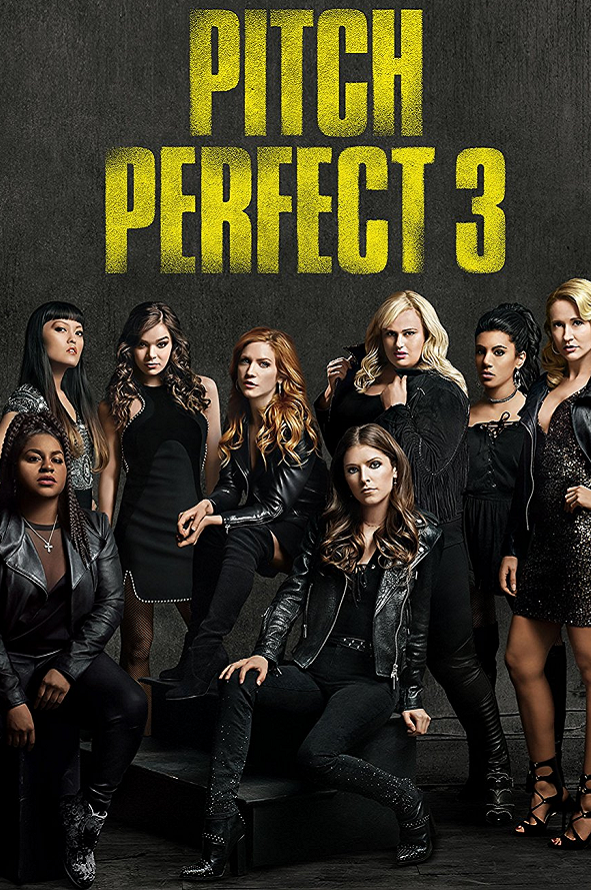 It’s time to end the trilogy at long last. Pitch Perfect has definitely been a series with a lot of musical themes and some fun ideas, but ultimately it has not been able to reach up to its potential. The best parts of each film have always been the riff offs. This film does improve upon the second film in almost every aspect which is good, but ultimately still couldn’t shatter the border into being one that I’d recommend. I appreciate the fact that we got some fight scenes though.

The film starts with the Bellas all still on their separate paths in life since they aged out of the Bellas. None of them are enjoying their current jobs though and Beca ends up quitting hers. Fortunately that’s when she becomes aware of Emily sending everyone an invite to take a look at the new Bellas. The heroines were hoping to sing, but it wasn’t to be. Still, it gets them together and they decide to compete in the military contest. The winner gets to be the opener for DJ Khaled. Do the Bellas still have what it takes?

Pitch Perfect 3 is more of the same in many respects. It’s an adventure with the girls trying to prove that they have the best acapella skills out there while having to compete with people who use instruments to augment their singing ability. They are also dealing with real world issues that makes it hard for them to focus on the group at times and that is really their main dilemma. This time the main character is probably Amy although Beca gets a large role as well.

One area where it improves from the second is that the film isn’t quite as crude. Keep in mind that this is relatively speaking though as the second one was just super over the top. The third isn’t quite as bad, but that doesn’t mean that the writing is good. Most of the characters are pretty obnoxious the whole time and you can’t help but root for the disaster group instead. The Bellas really haven’t proven that they deserve to be on the grand stage.

Unfortunately the musical numbers aren’t as dynamic as in the second film. That one had a ton of songs left and right with all of the bands while this one had fewer ones. It did have the big riff off that all of the films have though. As always it was the best film in the series and it does remind me that if the whole film were about the riff offs it could be amazing. I just like the concept of people battling it out through song. The Bellas were party poopers the whole time though as everyone on the base were trying to have some fun. Without a doubt the main characters lost that round.

Despite being the protagonists, you’ll be rooting against the heroes most of the time. The disasters actually earned their spot here and you just know that they’ll get snubbed right from the start. Then you’ve got the army guys who want to have a good time, but Amy continues to harass them the whole time. They probably could have sued her to be honest, but they were trying to keep things professional at the very least. I’ll give them some props there.

The romance here is pretty weak. We do learn that the main characters broke up with the guys from the second film and I don’t see any reason why this would be any different in the third film. There’s a bit of a twist with Theo so we may not need to count that as a romance plot, but there did seem to at least be one-way interest. The film’s at its best when the gang are just pumping out songs, but surprisingly we just don’t get a lot of that.

Beca is greatly improved from the second film though. She’s more of a leader here even if she’s making some of the same mistakes. I don’t really think she needed to quit the job since it wasn’t that unreasonable. You are working for someone so you can’t expect to have everything go your way all the time right? Once she is on the team she may still panic quite a bit, but at least she isn’t being humiliated the whole time the way she was in the second film. Now that was an embarrassing showing for her. Meanwhile Emily gets a very small role here which is unfortunate. She’s still the best member of the group by far. It’s not even remotely close despite the whole cast constantly ganging up on her. She’s the only one to come up with a plan to try and get their dignity back, I think that’s pretty impressive in itself. At least she is still on the real Bellas team while the others are just getting their last hurrah.

Amy continues to be one of the worst characters in the series. Part of the issue here is that she is the comic relief character in a comedy film so they have to dial her to 11 just to stand out in such a crowd. Her fight scenes aren’t meant to be taken seriously, but I suppose it’s nice to have an action parody in here. If she was more of a loyal friend and not super desperate to be with a guy she could have some potential.

We can’t forget John and Gail who are always here to make their crude comments and follow the heroines around. They get significantly less to do here even though their plotline of filming a documentary had a lot of potential. They’re reasonable as humor characters since I do like the fake announcer voices they use. Their lines aren’t 100% terrible this time either so they have their moments.

As I mentioned the songs aren’t as good as in the second film, but they’re not bad. The tunes during the riff off are pretty clever and it’s always interesting to see how many songs you can come up with for a single theme. That’s tough to do on the spot and I still think we need a whole film for this. The climax had the heroes singing a better song than in the second film which is good as it felt more like they could hold their own. Beca also made the heroic call when it counted.

As a whole I have to dock the Bellas some points for falling for such an obvious trap near the end of the film though. That’s the kind of thing that you just can’t let happen to you if you want to keep your hype. Fortunately the villain wasn’t all that smart so things worked out, but it could have gone sideways very easily based on how they fell for this.

Overall, Pitch Perfect 3 improves on the second one and likely beats the first as well. The fact that it is basically a franchise by this point does help since you are used to the characters now. Still, it makes a lot of the usual problems which keeps it from going higher up the ranks. The dialogue is pretty weak and that’s going to doom any film. The fun parts aren’t enough to raise it above this. You’ll have a good time watching this film and if the plot sounds good then you may have a great time. That being said, don’t expect this film to really stand up on its own merits all that well. It’s a fun ride where you’ll feel motion sick afterwards.