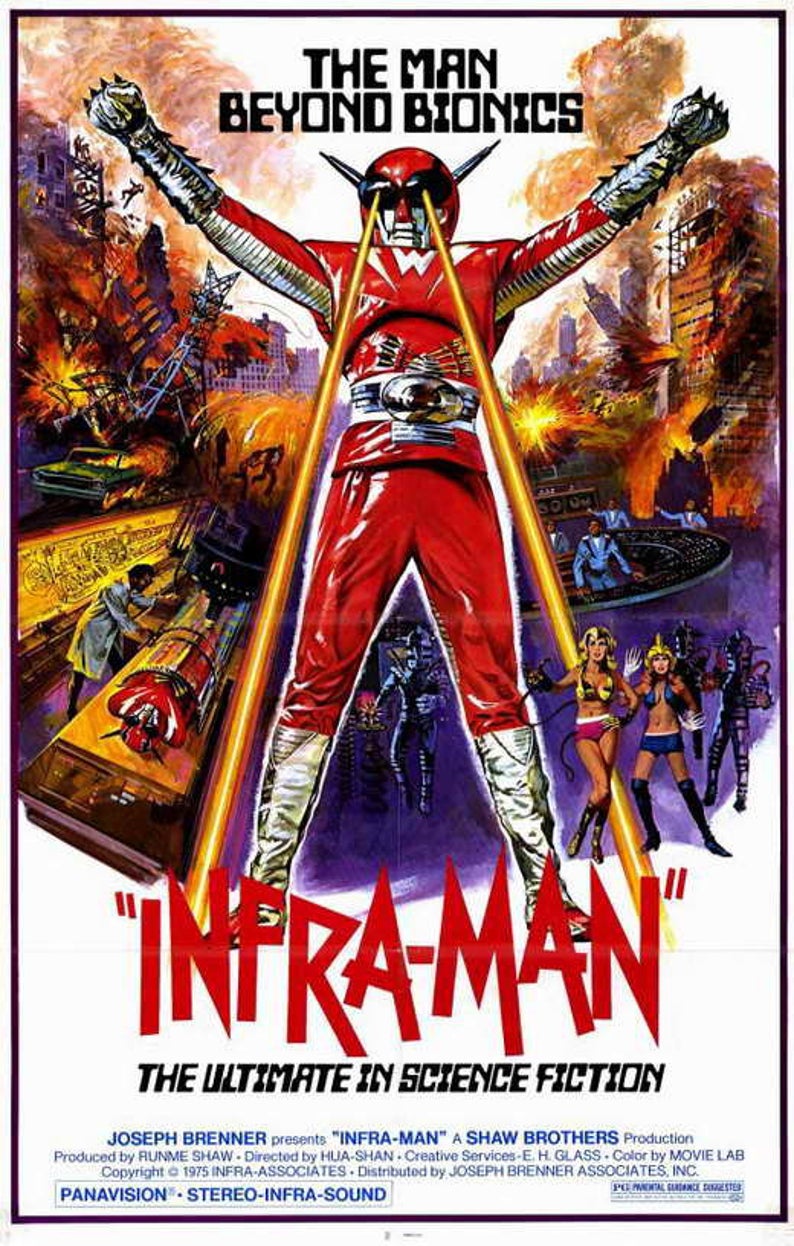 It’s time to look at an old school Power Rangers type film. I have always been a big fan of the Rangers, but never really got around to checking out any of their shows. Well, this is the next closest thing and it does reassure me that this type of series is definitely up my ally. The Super Inframan is a great film that is a lot of fun from start to finish. It’s hard to go wrong with a nice array of monsters and hand to hand fights like we have here. The film may not be all that long, but they fit in a ton of action and quality scenes. There is never a dull moment to be found here.

The film starts with the Dragon Mom returning from her long slumber and she decides to destroy the world. She has amassed an army of powerful monsters ranging from spellcasters to more traditional creatures. Her second in command is a normal humanoid though and while she may sound out of her depth this character is actually a good fighter. The heroes realize that they need some power to counter this so a scientist gives Lei a shot that transforms him into the Super Inframan. In this form there is nothing that he can’t do. Lei decides to stop the villain group no matter what. It looks like this time he will actually have to try.

It’s hard to know where to start here since the film is really good on a lot of levels. I guess we should do the obvious first and that is the fight scenes. They are all really well done with a lot of excellent choreography. One of the standout fights is when one of Lei’s friends attacks the villains on his own. He actually does a great job of taking down dozens of them before he is eventually defeated by one of the monsters using a net ability. All of the other fights are good too though like the climax where it is a big battle royale or the various fights as Inframan. Aside from one match that was just beam spamming from side to side all of his fights were hand to hand as well.

Inframan also has a good array of powers which served him well during the matches as well. He can turn giant, fire off his fists, use laser blasts, etc. It’s really hard to defeat someone like this and Inframan is definitely shown as the strongest fighter except for possibly the Dragon Mom who was dominating him in the fight. Granted, Inframan was a little weakened from his other battles. Lei is a solid lead and I dare say that his dynamic as Lei and Inframan was more enjoyable than Hayata and Ultraman. This is due in part to the fact that Lei has more personality and is just a likable guy. He’s pretty quick on the uptake and always ready to help out. He also doesn’t hesitate to transform and take on the villains at any time.

Then you’ve also got the soundtrack which is pretty fun. Inframan’s main theme is suitably heroic and gives you an extra jolt of energy whenever he is getting ready to join the fray. Now there is one technical level where the film falters and that is the fact that it uses a lot of recycled footage whenever Inframan transforms. This is likely intentional as part of the camp factor, but it’s still got to be noted. Recycled footage is something you really don’t want to use as it feels like stalling for time. I also question why the footage was the triple flip. It’s not like that’s something that Inframan does a lot furing the movie.

The villains are also very solid which speaks to the solid writing and character cast of the movie. The Dragon Mom is definitely one of the best ones. I like her confidence and she is quite merciless. I was not expecting her to actually murder one of the heroes so that definitely surprised me. It’s not every day that you see a villain make a move like that. Whoever did her English voice did a solid job. Then you’ve got her fighting abilities which were sound. Her minions had a cool uniform and the other monsters at her disposal all put up valiant fights. While you aren’t likely going to remember their names you’ll remember the designs and their determination. The human also put up a great fight against Inframan and it was brave to even attempt to fight him. The villains were surprisingly loyal and I also liked how upbeat they were. You’d see them dancing in the background whenever the Dragon Mom was talking.

The heroes are solid as well. There’s less to say about most of them since they stay on the sidelines, but as I mentioned one of Lei’s main friends did a good job holding off the enemies by himself. The other members can also fight even if they never got a big moment to shine. They were still able to contribute and that’s the important thing. There are no annoying characters here. There’s nothing even remotely negative to say about the film. The pacing is on point, the writing is great, the fight scenes are amazing, this is just a very well rounded film and one that I could easily re-watch. There’s a lot of fun to be had here and it’s a shame that they just don’t make movies like this anymore.

Overall, The Super Inframan is one of those super obscure films that deserves to be more well known than it actually is. You’d have a lot of fun watching this movie for sure. On one hand it plays on your nostalgia as you remember what great fun this era was and on the other hand you get to see a new superhero taking down legions of monsters. I liked the suit they used for the Super Inframan and the ones for the monsters as well. It feels like this was probably a pretty big budget film back in its day. Hopefully the Inframan gets revived in some form or another at some point because this franchise still has a ton of potential left in it.