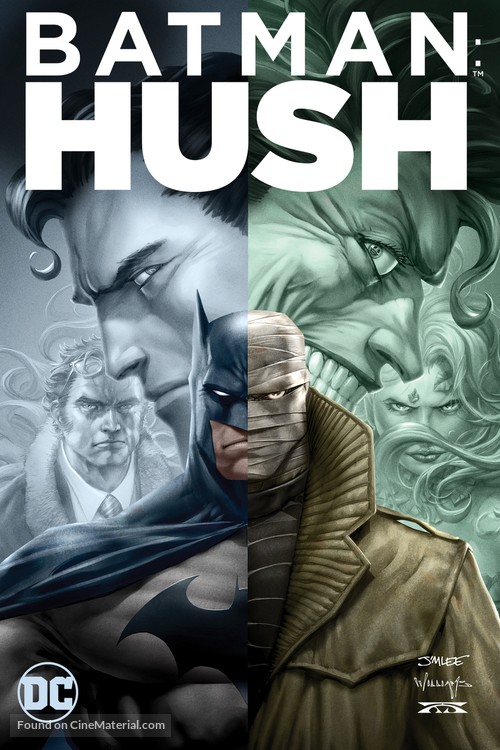 It’s time to look at the most recent Batman film to come out. It’s adapting what I consider to be one of the most well known Batman arcs out there. I’m still waiting for Battle for the Cowl, but it’s always nice to have more adaptions at the ready. I haven’t read Hush yet so it was interesting to go into it fresh. (Of course I already knew about the Superman fight though) It’s a good story although some parts of it were a bit weak which keeps this from being one of the best Batman films. It definitely gets obliterated by Bad Blood which is quickly becoming one of the definitive Batman titles.

The movie starts with Catwoman being back in town and back to her thieving ways. Batman is disappointed but he goes in to stop her only to be shot from behind and knocked out. A new villain named Hush is around and he has been following Batman for quite a while. Somehow he is getting a lot of the villains in Gotham to make a move so Batman is busier than he has ever been before. He still believes that Catwoman can be changed and so one part of the plot is that he’s hanging out with her both as Batman and as Bruce Wayne. Meanwhile you have Poison Ivy, Harley Quinn, Riddler, Joker, Bane, and a bunch of other Batman villains running around. Batman does have his support staff of Nightwing, Batgirl, Damian, and others but will they be enough to stop this new threat?

Well, let’s look at the good things first. As always the animation is great. Regardless of how the films have been in other areas at times, the animation has been consistently great for all of the main-line DC films. It’s quite top notch and the closest thing you’ll see to the classic DCAU animation. It’s really come into its own and all of the fight scenes are very good. The wind effects after each blow is swung are handled very well and the choreography is great. The character designs are all really good and same goes for the backgrounds.

The story is engaging as always. You’ll be eager to see what’s next at all times. This movie also feels like a crossover of sorts as you see guys like Superman and Lex Luthor show up as well as Nightwing, Batgirl, and Damian. While the latter 3 are Batman characters you still don’t see everyone show up like that all too often. Batgirl in particular feels like a bit of a guest star character as she shows up for one quick fight scene and then leaves again. Personally I feel like she should be able to defeat Catwoman, but typically that doesn’t seem to be the case.

Now I think where the film is at its weakest is with the romance here. Batman is borderline out of character for a good chunk of the movie. As always he lets his interest in Catwoman get personal but to a greater degree than usual. There’s quite a lot of romance in this film and it’s not like Batman to let such things distract him during such a dangerous time. He knows Hush is around so he has no time to be with Catwoman right now. Taking up time as both Bruce and Batman is also time he could be using to solve the case. He was even awfully close to letting her convince him to leave the city for a while even with the villain at large.

Batman also loses control of himself in the scene with Joker awfully quick. I get that it was a big moment, but I don’t see how it hit him quite so hard. Surely it’s not quite as traumatic as what happened to Jason Todd and Batman was able to control himself a lot better there. You could make the case that it’s how these situations keep piling up which pushed him over the edge, but I think it’s a bit of a stretch. Batman is portrayed as extremely emotional in this film compared to the others and I don’t think this was a good idea. He just doesn’t feel like Batman at times. Damian is the voice of reason instead and it’s too bad that he only got a cameo here.

Meanwhile Catwoman also looks pretty bad here. She does do a good job of trying to get past her thieving ways to an extent although it’s hard to really buy into it since she’s said this many times before. (Albeit, not in this continuity) The way her character arc ends doesn’t make any sense though. The way she acts at the end doesn’t make any sense because what happened shouldn’t have been new information for her. I’d understand if we saw something more drastic, but Batman didn’t do anything that you wouldn’t expect him to do. It makes Catwoman appear a bit shallow. She’s never been one of my favorite characters anyway but it’s still not great for her.

Then we’ve got Joker who looks downright terrible here. The guy is usually not a bit player that everyone has their way with, but you wouldn’t know that from this film. He’s completely overwhelmed and out of his depth from the start. He doesn’t even realize that he is walking into a trap. Usually the Joker is able to match wits with Batman so this was odd. I was expecting him to look more like how he did in Phantasm where he turned the tables pretty quick. Here all he did was get wrecked for a while and do a terrible job of trying to explain what was going on. Harley Quinn did better as she was at least doing something about the situation.

We get other villains but they don’t get as big of a role. Poison Ivy kept some of her hype here since Hush was worried enough about her abilities to have a bomb at the ready. Poison Ivy may not be one of the biggest Batman enemies, but she is definitely one of the most dangerous. Her plants are just really handy to have around. Bane and Clayface are just here for cameos but they are cool to see as well. Superman is the biggest guest appearance, but he looks pretty terrible as well. There’s no conceivable way that Poison Ivy should have been able to get the drop on him. I don’t care if she had Kryptonite make-up and a green suit, he should have been ready. The instant she got close he would have detected it but not been weak enough to faint. That’s when it’s time to dash out of there. I also wish he had more will power since he tends to get mind controlled in every other film. Lex looked good at least and he has a point that Batman should treat him with more respect since he is now a League member. Without him Batman would have been in trouble.

How about Hush? Well, he’s definitely a solid villain. It’s always nice to have a villain that can really test Batman’s deductive abilities. Hush does a good job of keeping everyone wary and he has a good design/voice. The guy is an intimidating villain and you’ll be interested in seeing who his true identity was. The movie did a good job of giving you a fair chance to make the connection without making it obvious. I wasn’t able to figure out who it was before the film ended so the movie did good there. He also gives us a solid fight scene at the end of the film.

Batman movies usually have some kind of mystery in it and that’s part of the draw. So having a solid mystery with Hush in it does help this movie stay interesting. Then you’ve also got a solid array of fight scenes which help support the movie. The pacing is solid and something is always happening here. It’s really just the romance and some of the characters being out of character that holds this film back. Put it this way, I’d put this movie above Son of Batman, Batman vs Robin, Batman Year One, Gotham Knights, and Mystery of the Batwomen, but I’d put it under Sub-Zero, Mask of the Phantasm, Bad Blood, Return of the Joker, and Red Hood. I’m probably missing a Batman film or two, but these are the ones I knew off the top of my head. It’s a reasonable ranking and that puts this movie around the middle of the pack which is pretty good.

Overall, While I had my issues with Batman Hush it is still a very good movie. It’s the kind of title where even if you know the outcome of the mystery it still works pretty well for re-watches. There is a lot of replay value to be found here and any Batman fan can quickly get into the film and enjoy it. If you haven’t seen this movie yet then you should definitely check it out. I can see why the arc is pretty well known as one of the big Batman arcs. Now I hope we can get a Battle for the Cowl arc soon. We’ve got all of the necessary characters introduced into the series already so it would definitely work and we’re running out of Batman arcs to use anyway. I think it’s the next logical step.