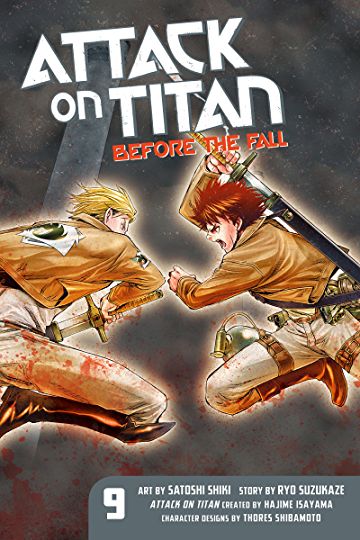 It’s time to look at one of the Attack on Titan spinoffs. The manga really lasted for an incredibly long amount of time considering how short the novels were. Even then the first novel is skipped for the most part as we cut right to the Kuklo stuff although the manga eventually adapts the older material. It’s a little better than the main series, but significantly less engaging which may sound like a contradiction. Put it this way, the main title is a lot more interesting and will keep you at the edge of your seat. It has more hype scenes and a better cast of characters, but the guys in Before the Fall are less morally bankrupt. The series is also shorter so there are less opportunities to mess up, but at the end of the day I wouldn’t give this series a particularly high score.

So Kuklo is a kid who grew up in a tough situation because he is known as the Titan’s son. This isn’t actually true, but people say that because his mother was eaten by a titan but he survived since he wasn’t totally born yet. As a result he grew up in a cage where Xavi would beat him up daily for many years. Eventually Kuklo was able to escape and thanks to Sharle was able to learn what it means to be human. He has now dedicated his life to ending the Titans. He wants to shed his title as the Titan’s son and this will be one of the best ways to do it.

As this title takes place in the past the goal of beating a Titan is significantly more outlandish than it would be otherwise in the eyes of the masses. It’s almost scary how back in these days beating one titan was crazy while in the main title you have guys like Levi taking them down by the dozens. It shows how equipment and technology has improved so much since those days. I suppose one of the interesting parts of the manga is seeing the heroes develop the 3D gear that would later be used to strike down all of the Titans. It is definitely a really handy piece of technology that is a must have.

Part of what hurts the manga is the whole plot with Kuklo. Attack on Titan has always been a series that thrives on being gritty and grim throughout. Even for this title it was rather dark though as it’s basically a kid being tortured every day. It also makes Xavi too far gone for him to ever be sympathetic. The series tries to make him a bit of a redeemed character by the end, but it’s a hard pill to swallow. As it is, maybe you could have tried to pull this off if this was the only thing he did. The guy was a kid so he didn’t know any better or something like that. Well, even in the present he tries to murder Kuklo repeatedly. Even when they’re in the middle of a mission to end the Titans which has huge stakes for the whole world his only priority is to murder Kuklo. Xavi really has a one track mind. It’s a shame because otherwise he is probably the most engaging character in the series. Why couldn’t he have at least had an honor code or been more of a reasonable character? That’s all I wanted to know.

Meanwhile Kuklo is a good character. He can be a bit naive, but you have to give him credit for not holding a grudge with Xavi. That can’t have been easy, but Kuklo consistently proves to be the bigger man and doesn’t let these things bring him down. While he isn’t as intelligent as Eren, Kuklo also has some pretty good ideas and plans that come in handy. He’s resourceful and knows how to survive even in Titan infested areas. His super senses come in handy for that and physically he seems a little stronger than the average human. Maybe there is something to the whole titan child thing in that the fluids at least gave him abilities or something. Either way he works as a solid lead.

His best friend is Cardina and that guy has a big role for the majority of the series as well. While he isn’t quite heading to the front lines as much as Kuklo, his expertise with the machinery comes in handy. He has a wealthy upbringing, but that ultimately just got him into trouble which is how he ended up heading outside with Kuklo. Cardina was a good ally and it was nice for Kuklo to have someone else who could help give him support since Sharle wasn’t always around to help with that.

Sharle is a pretty solid heroine meanwhile. The manga gives her a lot more screen time in which she is able to contribute. It works out well as she gets Angel out of his shell and back into action from retirement. She learns a lot about the inner workings of the 3D gear and also stands up to Xavi in defense of Kuklo. A lot of the time she is kept in the dark on what’s going on, but is always looking for Kuklo and doing her best to help out. Sharle tries really hard to always be ready for action so I definitely have to give her some good credit there.

Then we have Gloria whose character arc is definitely a bit more tragic than some of the other characters. I think she should have played the ending a little better. She falls for the whole posturing trap where she talks a really good game throughout but still puts herself in some bad situations. I think she underestimated just how corrupt the city is, but at least had some contingency plans so she was able to take a lot of people down as well. It would have been nice if she could have kept on appearing. Then you have Jorge who is effectively the Erwin of this era. He’s a good planner and a solid general. He tends to make the right decisions throughout, but doesn’t really leave much of a mark on the series. You really just know him for being a good general and that’s about it. 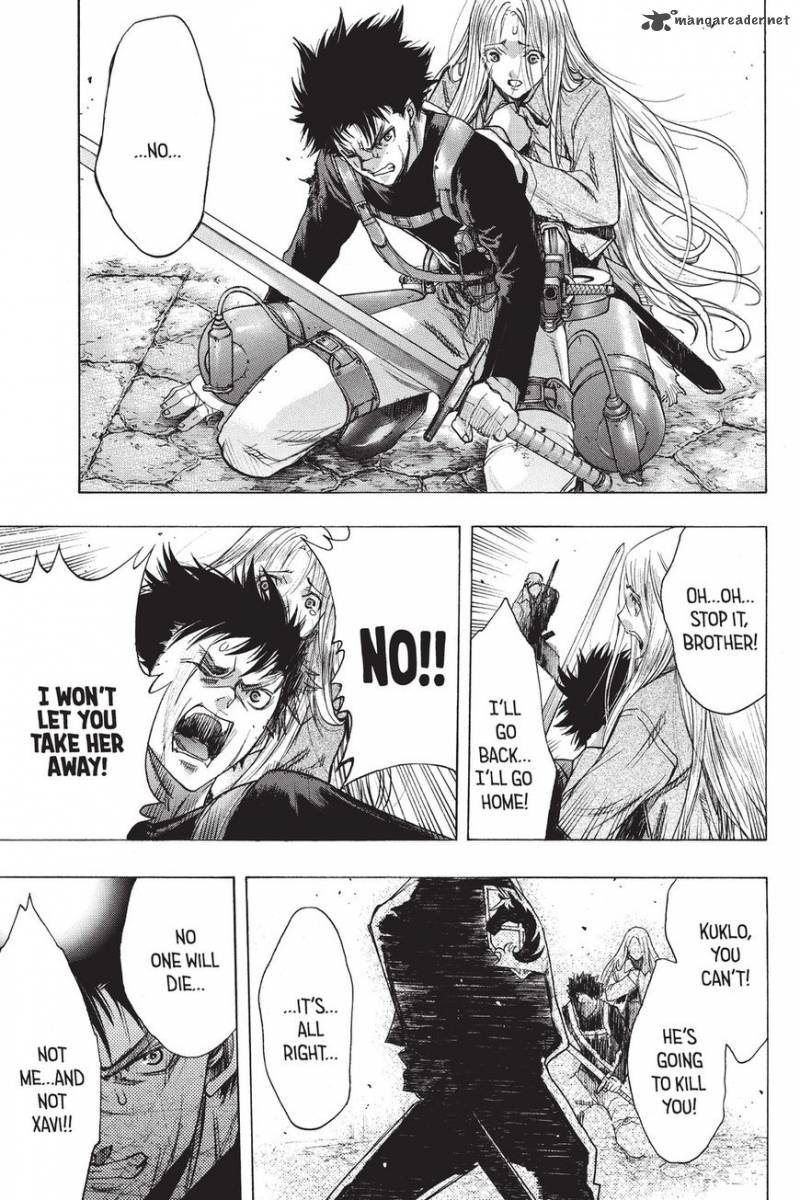 As I mentioned Angel doesn’t get as big a role in the manga as in the light novel and it ends up hurting him. Most of the time when we see Angel he has already fallen into depression from retirement and has no more hope that the humans can win. It doesn’t really paint him in a god light as by the time Sharle has gotten him to think otherwise we are basically done with the series. I liked him in the original novel and he still looks good in the flashbacks, but I think having his worst scenes first ends up hurting the experience.

Finally we’ve got the Ogre who is responsible for Kuklo’s mother perishing at the start of the series. As a result there is a vendetta between the two of them. Ogre seems to be more intelligent than the average titan and is fairly powerful. He’s not an easy target and made for a pretty good end arc boss. A normal Titan just wouldn’t have been nearly as thrilling to fight. I suppose we couldn’t have a talking titan since that would have been too soon, but I admit that it would have made Before the Fall’s climax a little more exciting.

One of the themes in the main AOT series is whether the humans are the real monsters or not. This series doesn’t go quite so far, but the humans do look pretty terrible most of the time. Even when Titans are outside the gates they’re busy murdering each other for political position and power. The Titans wouldn’t be doing nearly as good without the humans constantly destroying each other and constantly getting in the way. Even by the end we find out there is a traitor in the Survey corps and this person came awfully close to murdering a member. I feel like the person got off rather easy although it could have been worse. There still was a punishment at least which is good, but every time you see a traitor like this you can’t help but shake your head.

The humans will never beat the Titans if they’re constantly fighting like this. You’ve got characters getting jealous of each other and all that. I’m fine with the fact that the survey members didn’t appear much here because whenever we see them most of the members are pretty bad. It was good character development to have Kuklo and Cardina become squad leaders though. They really did grow a lot as the series progressed and that’s one aspect where the longer run time ended up helping them out. By the end it’s hard to imagine that Kuklo was ever not the strategic captain that people look up to.

In regard to the art, I’d say that Before the Fall is pretty good. There’s a solid amount of detail here and the characters don’t look too similar or anything like that. The titans have the creepy designs you would expect. The human vs human fights are really where the title excels with a lot of good speed lines and dynamic angels. The series can get pretty violent as you would expect though. It’s got the usual Titans munching on poor humans who really don’t stand any kind of chance. People aren’t begging for their lives as much as in the original title but the Titan scenes still end up being some of the weaker parts of the manga. Give me the Kuklo vs Xavi fights anytime. 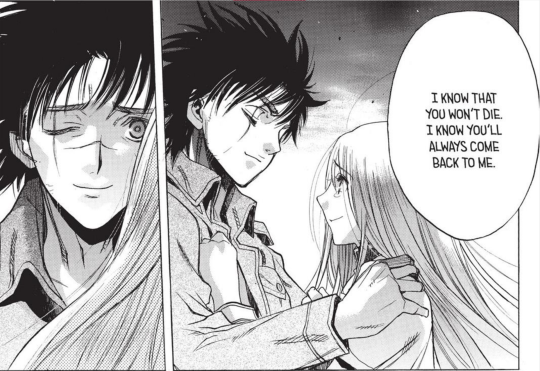 Overall, Before The Fall does a good job of maintaining the tone of the original series. That being said, the main series is one of the weaker manga that I have read so it didn’t bode well for this one. The character cast isn’t all that strong and it falls into most of the usual Titan negatives like excessive violence and everything being too grim the whole time. It’s hard to root for the humans when half of them are evil and when their whole mission seems futile. They are having a hard time dealing with 1 titan and there are hundreds of them beyond the borders. It just feels like the humans would never get past this and since we know this takes place way before the main series where things are pretty much the same…it all feels a little futile. You can’t help but think that nothing these guys does will matter in the end. It has no real effect on the main series. It’s a complaint you can have with any prequel, but most of them do a good job of at least making you feel like the characters are making a difference.

2 thoughts on “Attack on Titan: Before The Fall Review”