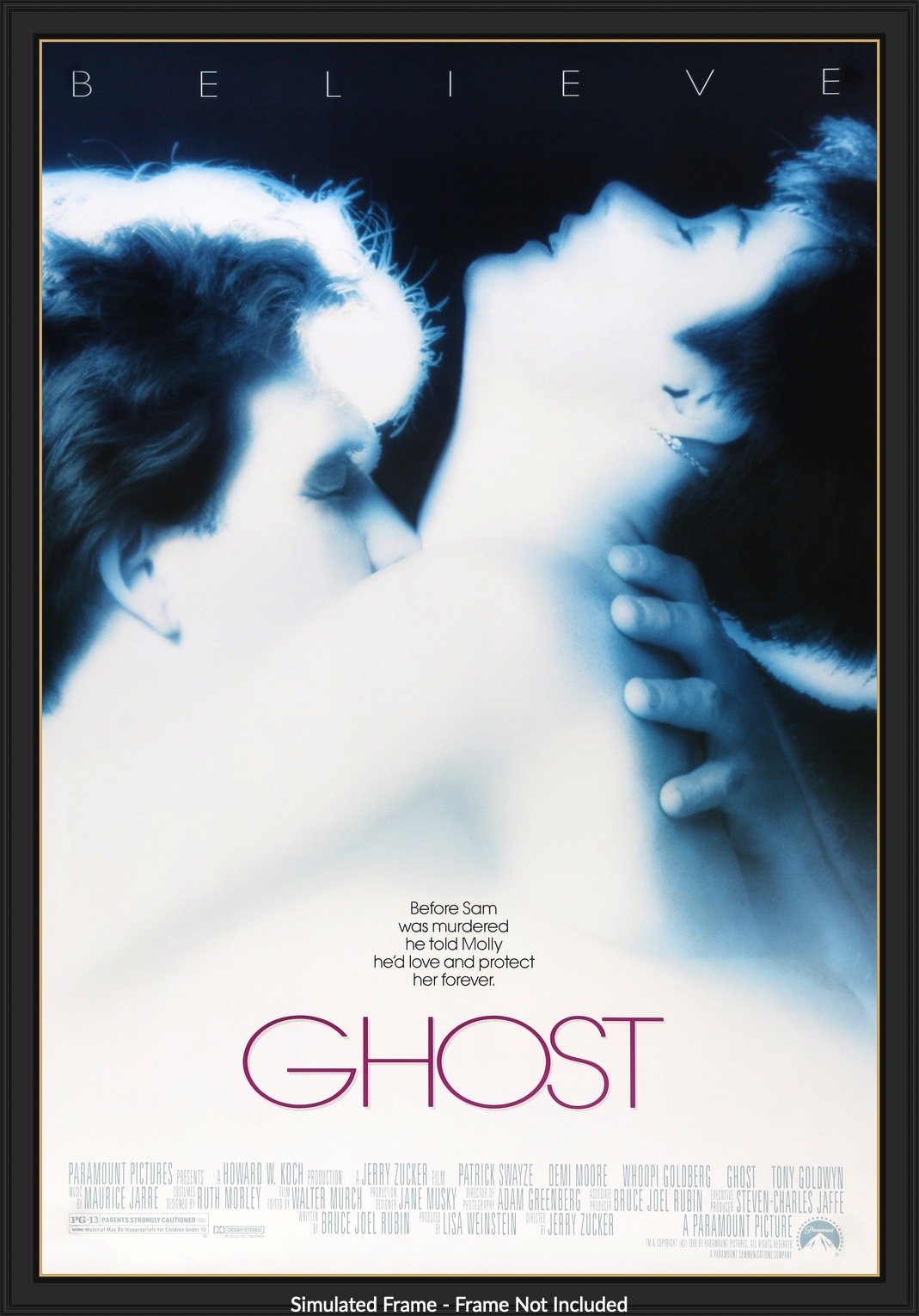 It’s time to look at a film dealing with the supernatural. It’s always interesting when the hero becomes a ghost as opposed to the villain for a change. Usually you see the villains messing with everyone like in the Grudge or something and the heroes are all bumped off. On the other hand, when a hero uses the power usually they aren’t quite as strong for some random reason so it’s a bit of a mixed bag. Ultimately I was glad Sam got some powers and it’s a reasonable movie, but there are things that hold it back a bit.

The movie starts with things going pretty well for Sam and Molly. Sam’s crunching the numbers at the bank and Molly’s doing pretty well with her pottery and sculpting. Sam’s noticed that some numbers aren’t adding up at his company, but he’ll figure out the issue soon. Time is on his side…or that’s what he thought until one day he is mugged in a dark alley and murdered. It all happened so suddenly that Sam’s soul is unable to move on and now he can only watch without interacting with anybody. That’s when he learns that the whole thing is a conspiracy. His murder wasn’t accidental and if he doesn’t do something quick then his wife Molly will be in trouble. Sam is forced to enlist the aid of a supernatural medium scammer named Oda. Can he convince her to work with him on this?

The concept here is pretty sound and a classic. The main character gets murdered so now he has to solve the case from beyond the grave and see to it that the villain doesn’t get away. It’s certainly frustrating for Sam at first since he can’t interact with anything, but gradually he gets used to his abilities which makes him more of a formidable threat to everyone involved. Sam’s power does go to his head a bit as he has a tendency to play with his food rather than finishing the job and goes for a quick hug even though it puts everyone in danger thanks to the side effects. He’s not perfect, but he’s still a pretty solid main character.

Unfortunately the heroine Molly ends up faltering here. She’s good at first and seems like a supportive character. Where she really ends up failing is when Sam’s friend Carl shows up and she rebounds with him even though Sam only died a few days ago. That’s so incredibly soon that it’s crazy. Even if you ignore the fact that she thought he may still be around as a ghost or that he was grisly murdered…it’s only been a few days since he was gone. No matter how sad she was there’s really no excuse for going with this guy. I thought that whole scene was pretty terrible and I have to say that it did end up hurting the score.

We had gotten quite a few romantic scenes with Sam and Molly earlier so it just made those feel hollow. In general the romance just wasn’t written well as a result and we could have just cut those scenes entirely and replaced with more supernatural hi-jinx. Maybe have Sam troll a bunch of people from beyond the grave by moving things around. It is entertaining to see him messing with Willie and Carl. He also annoys Oda quite a lot until she eventually agrees to help him. When you’ve got ghost abilities you may as well use them right?

Carl’s a pretty terrible character right away. The instant he starts going after Molly you know there’s no hope for him. It’s also fairly obvious where his character is going even before Sam dies with his line about how the numbers aren’t adding up after he gives away his account numbers. It’s definitely a good lesson on why you shouldn’t trust people too much. There are certain things you should never give someone else like your social security number or password to your office computer. Those are things that just always ring true and nobody ever needs to know those things either. The deadlines were quickly approaching but you’ve still got to not budge on this.

Oda is a pretty fun character. She’s definitely reluctant to help and has to be convinced quite a lot and at different points in the film. Oda also tends to mess up on things like writing out a check and pretending to be someone else, but at the end of the day at least she is an ally who is here to help Sam. Those were in short supply. Also, she’s just a lot of fun. All of her scenes are pretty entertaining and in part it’s because all of her reactions are pretty well justified and realistic. It’s incredibly hard for anyone to part with 4 million, especially when you’ve been taking life or death risks all day. You feel like you should at least get 1% of that which would still be a pretty good sum. Not everyone can get rich though and at least she kept the moral high ground.

One of the best scenes is when Sam goes into a train and is confronted by another ghost. It was cool because we hadn’t seen anyone else until then and it was also the first moment where Sam experienced real danger as a ghost because this guy could actually interact with him as if Sam was still alive. It was a shocking moment for the lead and he did his best to adjust. My issue with Sam here was just that he went down awfully quick without even landing a counter blow. I like to think that he would at least have done something.

Overall, Ghost is a decent movie. It’ll keep you entertained as you watch it even if you’ll question the characters at different points. Sam really should have been able to end things with the villains a lot sooner than he did. If anything the instant that one of them threatened to murder his wife at the end if Sam didn’t meet his demands, Sam should have taken him down. Waving a knife doesn’t do anything to someone who’s intangible and at the time Molly was still upstairs. Sam could have just reached over and ended the guy in many different ways. There are even hundreds of non lethal ways to take him down. My point here is really that Sam didn’t use his abilities nearly as well as he could have and was probably having too much fun with the villains when everyone could have already been safe by then. That was my main issue along with Molly not staying strong at least for a longer period of time, but even then if you go with anyone it should never be the best friend. If you want to see a movie with this interesting concept then I’d recommend checking it out. Otherwise I don’t think you’ll be missing a whole lot.