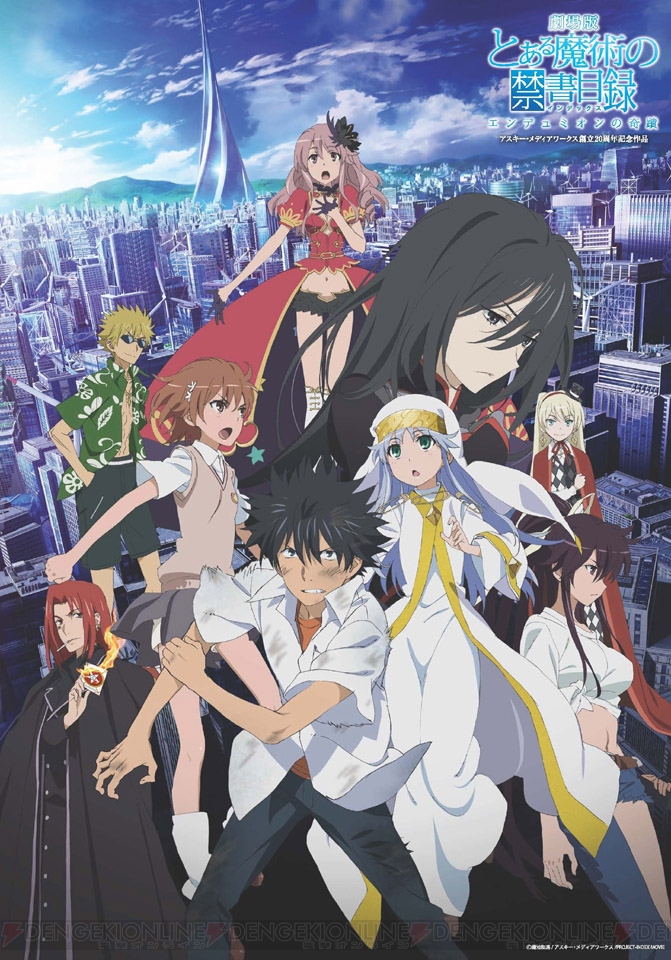 It’s time to look at the Index film that came out a while ago. The series has definitely expanded quite a lot with three different shows coming out. Two of them already have 3 seasons which is quite impressive. While the series is mainly an Index film it does bring together the leads of all 3 titles. Unfortunately the film doesn’t really plan out many things for them to do and falters with some fanservice issues which limits how solid the title could ultimately be. It’s an interesting premise with a solid opening act, but it just couldn’t stick the landing.

The film starts off with Touma and Index meeting up with a singer named Arisa. She’s quickly become mega popular over her songs lately and even someone like Touma who doesn’t really listen to music much is a big fan of hers. The three of them get along well enough, but then Arisa is attacked by 3 mages working for Stiyl. Touma tries to figure out what is going on, but Stiyl gives no answers and the heroes are saved by the arrival of a mysterious group of robot riders led by Shoutaura. After everyone leaves with no explanation Touma invites Arisa to stay with him and Index for a while until they sort things out. Everyone is after Arisa and Touma aims to protect her for as long as he can.

Everyone going after the new film character isn’t really a new concept. It’s a convenient way to get everyone in on the action from the jump and works well enough. Arisa is also a likable character who just wants to spread the joy of music to everyone so I have no complaints with her. She also stays strong and sings her song for as long as possible even when the circumstances are getting quite dodgy for her. She never gives up and that’s good since not all of the characters here can say that. There are 2 other important new characters.

The first is Shoutaura who has a personal stake in this. She does not like miracles at all and brings this up quite a lot. Shou is a solid fighter and her group comes in handy on more than one occasion. For a while she was my favorite character but she cracks quite a bit by the end and makes more mistakes than I could allow. I understand her being generally upset and not liking the main characters but by the end she becomes totally crazy. She should have just stopped at trying to murder Ladylee for a while. At least that made sense. Her final target made 0 sense and destroyed her character.

Meanwhile Ladylee is the main villain. She is cursed with immortality and isn’t having any fun so she is trying to get Arisa to fulfill her plans. I don’t think her plan is all that good because there’s no reason why it should erase her immortality. I suppose she needs to try something but ultimately this is a long shot. At least in the meantime she built up a pretty solid reputation and succeeded in life. Even if things don’t pan out nobody should be any the wiser so in theory she can continue her existence.

So, why did the film’s plot not work out so well? Well, as I mentioned the beginning is pretty interesting. You have the magicians and science users all going after Arisa. There’s gotta be a good reason for this right? Well, it’s a bit underwhelming. Basically Arisa has the potential to become a very powerful Angel who could throw the world into chaos. That doesn’t seem like a good enough reason to be hunting her. If anything all this does is make it a whole lot easier for the villains to try to get a hold of her. It also makes Stiyl’s group impossible to root for because they are hunting an innocent girl with no proof that she is bad. If anything they know that she is a nice person in the present and don’t care.

I’ve never been a big fan of Stiyl so it’s not super surprising so much as it’s just disappointing on his part. Meanwhile Kaori also appears briefly and while she is more sympathetic to Arisa’s plot, she isn’t exactly trying to stop her group either. She gets a decent scene trying to stop some rockets but there is no reason why she couldn’t stay to help in the climax except that the film didn’t want her there. I’m also dubious that her slashes could not cut through the random mechs that the villain group was using.

Another problem here is that the film sets up a lot of big fights and character moments only for them not to happen. One case is Accelerator as we see him fairly early on in the film with Last Order, but then he does nothing until the very end. He at least gets a fight right? No, he just gets to slam a tower, but that’s it. There was no real point to his inclusion then but he deserved to do something since he’s such a big character. You can’t throw someone like that into the mix and then not use him. Last Order was fun as always though and did have a good line about why Accelerator should care.

Then you have Misaka who falls into the same boat. She appears early on with her friends and even escorts Arisa through the villain base. (Although they didn’t know it at the time.) After that she doesn’t do anything until the end of the film where she zaps some robots and breaks a tower. This is another case where the whole thing is a missed opportunity. Misaka has broken the law before and has experience being a vigilante. The film should have gone into that as it would have been a pretty interesting plot line. Have her finally get to work with Touma and pals. That would have been really cool instead of doing nothing.

The weirdest part is that Ladylee has two main henchmen who work for her. You’d think that each character would get one right? Well, one of them dies at the very end without being able to fight while the other one is busy dealing with Shou. Both of these characters got some nice build up so it was an odd way to end. At least the main robot got a few fight scenes before he got blown up so it felt like he had an important role. The others…not so much. It just made so much sense to have all of these characters get some action. This is probably the single biggest way in which the film limited its potential. The setup was perfect for a big 3 on 3 fight and it just didn’t happen.

Now, the film wasn’t devoid of fight scenes or anything like that. We got quite a few good ones with solid animation. Stiyl and friends vs Shou was solid as well as Shou’s fights against the robot. The movie’s animation was consistently very solid with the character designs looking good and the energy effects being on point. The soundtrack is also good with a lot of the classic tunes thrown in. Unfortunately my favorite theme from the show didn’t show up but you can’t win em all. That would have helped enhance any scene you throw it into though. We do get a few insert songs from Arisa though which are a lot of fun. Her songs were actually translated in the English version which is cool. Those scenes are definitely a lot of fun.

One area the film struggled with was the fanservice as mentioned earlier. Characters just randomly walk around with nothing on for no reason. Mainly Shou was guilty of this and after it happened multiple times you can tell the film was just being cheeky. It had to throw in random bath scenes and Touma walking in on people too so in general the film was squeezing in as much of this as possible. It’s not as if any of the scenes themselves are all that terrible, but they’re consistent which is still a big problem.

Accidents aside, Touma looked good here. The accidents here weren’t actually his fault. Sometimes they are, but in this film they weren’t so I don’t hold it against his character. He’s quite patient despite being put in a few tough situations like having to pay for large meals that Index likes to eat. You’d think Index would contribute once in a while, but she never seems to help out financially. Touma also does his best to help out during the fights and is in general a good lead. Index isn’t nearly as solid as she just tends to get in the way all of the time. She is certainly not quite as helpful or charismatic as someone like Misaka generally and Arisa looked better in this film.

Overall, A Certain Magical Index: The Movie is decent at best. You’ll get a fun enough story that feels like it could be a two part episode of the show. All of the characters show up and since the music is the same as well it easily fits in with the series. Unfortunately it would be adapting some of the weaker stories with a plot that isn’t particularly strong and more fanservice scenes than some of the episodes tend to have. If you’re a big fan of the series then I imagine you’ll want to check this film out. It still is pretty fun and you’ll be engaged while watching. The weaknesses of the film don’t become as glaringly apparent until you’re done with it. While watching you just keep seeing scenes where you’ll shake your head and think it should have gone another way but there’s always a chance it could change by the ending. Otherwise you really aren’t missing much and you can definitely just go ahead and watch Railgun S instead. That’s still the single best part of the Index series with Misaka showing why she is a one woman army.