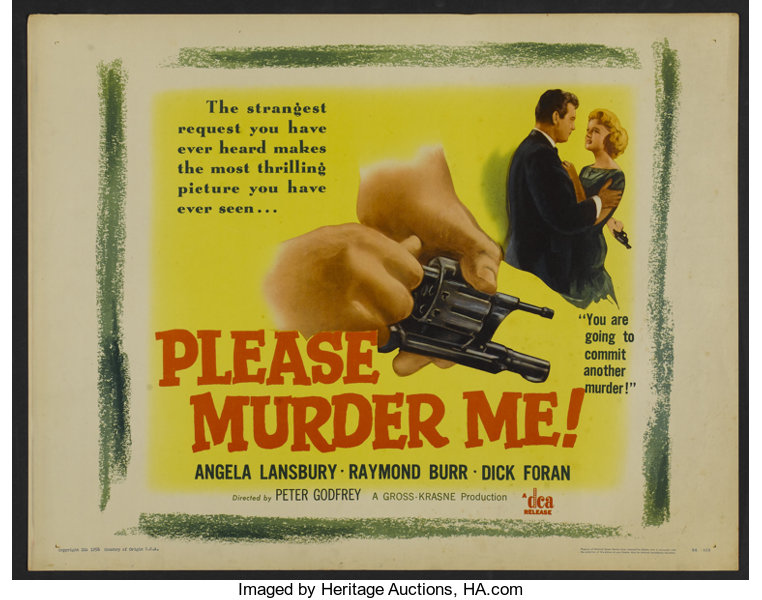 It’s time to look at an old noir film with a pretty interesting plot. Right from the title you can probably tell that this will be an interesting case though. You don’t really see titles like this much anymore and it does leave an impression. I was expecting the film to be good but I can safely say that it exceeded expectations. This will ultimately go down as one of the definitive Noir titles out there.

The movie starts with Craig heading to his office and beginning a recording. The actual recording is basically the rest of the film so lets head into the past. Craig heads to his best friend Joe’s office and lets him know that he is having an affair with the man’s wife. Well, Craig’s character is officially ruined. Craig wants Joe to have a divorce so he can marry Myra properly. Joe wants a day to think it over, but the next day he is murdered by Myra. She says it was in self defense and since Craig is a defense attorney he agrees to take over her case as she is being tried for murder. If Craig can prove her innocence then they can finally be married but will it be so simple?

So I have to tackle the romance part of this film right away. There is no way you can root for Craig or Myra here right from the jump because they were having a relationship while she was married. No matter how you slice it that is cheating and nothing should have happened until she was officially split. Craig tries to say that he didn’t mean for it to happen, but the reasoning doesn’t matter. You can never put yourself in a position where you may have an affair with a married person. It’s just not done and it’s even worse to the fact that it was Craig’s best friend. It’s the ultimate betrayal and it was a pretty tough way for Joe to get bumped off there.

Craig is a good attorney and pulls out all the tricks, but he still comes off as a bit of a sucker. Without getting into plot specifics he misses a lot of signs in the face of love and by the time he realizes what is going on it is pretty late. That’s why his plan is pretty clever and not one that you would expect to see. Usually the plot is completely reversed in terms of framing and paying for crimes you didn’t commit. This one flips that in a full 180 which was unexpected. The ending actually plays it straight and is a solid conclusion to a great film.

Meanwhile Myra is just as unsympathetic as Craig. She’s really just looking out for herself and in court the prosecutor (Ray) quickly drills down into what actually happened. He was definitely my favorite character in the film. He did a good job of connecting the dots and wasn’t falling for any traps. At the end of the film he does come across as possibly being a little naive but I like to think he was going to figure things out in a few moments. He was likely just trying to make sure that the others did not suspect what happened.

In general the film is a pretty good cautionary tale. You should always have a healthy amount of trust but when weird things happen left and right you do need to think about it a bit. Karma hits like a truck in movies like this where people get their just desserts right away but in real life it’s not always like that so you can’t afford to make the same mistakes as the characters in the film. Craig basically got what he deserved here along with the rest of the characters and if he had stopped to do the right thing in the beginning then none of this would have happened. Another character in the film is Carl who seems just as gullible in his short time of appearing.

The writing is quite good here with the characters all making quite a lot of threats as the film goes on while being subtle about it. I miss how everyone would always pretend to be quite polite back in these days with veiled threats behind every word. The film also does deliver on the noir aspect with a lot of narration from Craig and a bunch of dark scenes. He even works in the dark at times just like you would expect from this era. The film’s pacing is solid as things move quite quickly and I greatly enjoyed the court scenes as always. It’s all played pretty seriously with both sides looking competent in their arguments.

Joe could have played this whole thing a lot better though. Getting murdered aside since it would be hard to avoid that, he probably should have had some more details in his will or something to protect against what happened. Especially if you’re well off then putting extra contingents in your will or in various paperwork before getting married is just a good idea to cover your bases. It probably will put a strain on the relationship right from the start, but it’ll also ensure that you’re with someone who actually wants to be with you and isn’t just in it for other reasons.

Overall, Please Murder Me is a great film and I recommend it to anyone that likes a good thriller with some twists along the way. I believe a lot of viewers will suspect what happened right away but that’s fine because there is a good chunk of film left after the event happens. Technically in my plot summary I probably stopped a lot earlier than most summaries would because you could make the case that the twist is part of the plot and even on the poster. I’d argue that the film works even better if you don’t know this, but regardless you will like it. It’s just a very complete film with a compelling beginning and a satisfying ending.