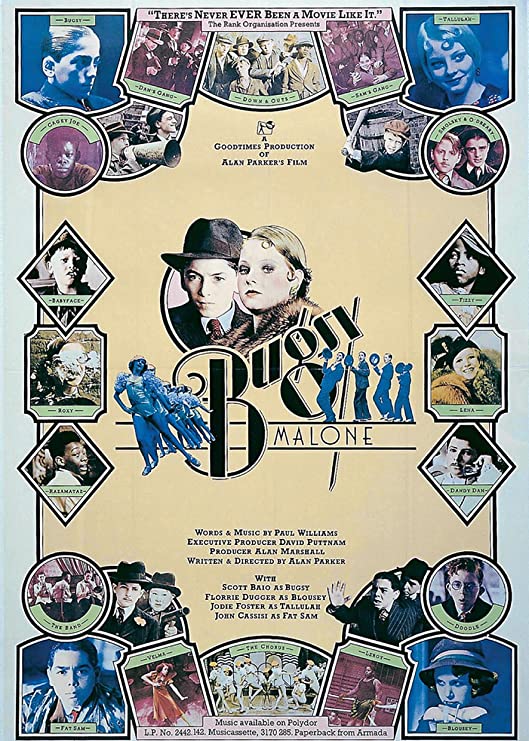 It’s time for a rather odd parody of the usual gangster film. Gangster films can be hit or miss as they all tend to be pretty similar but I haven’t watched enough of them to say that the whole genre is the same. That being said, a parody of one should have a lot of potential. This potential vanished when the kids showed up. The plot of this movie is that it’s kids who are acting like gangsters…and it doesn’t really work. The gimmick gets old after about 5 minutes and the rest of the film proceeds to drag on.

The film starts off with one of the gangsters getting iced by an opposing gang. He was supposedly one of the best in the biz but you would never guess it from the scene. He is murdered by whip cream bullets. His boss isn’t happy about this but he doesn’t have much time to worry since his other minions are pretty incompetent as well. He decides to start messing up the opposing gang in retaliation. Nobody crosses Bugsy Malone! There is actually a fairly large cast in this film which is a bit surprising. You do have to give the film props for effort. We’ve got 2 different romance plots, several of the gangsters have their own leads and it all results in a big meetup at the end of the film.

The whole film is a parody including the climax but if you take that away then the setting of the climax and the scale is pretty impressive. The film basically breaks the third wall here though as everyone survives the bullet shower and they all become friends. It’s a wholesome ending I suppose, but not the one you would be hoping for. It would have been fun if everyone just fainted from the whip cream and the narrator just says that this is why gangs are dying out. Eventually all of the gangs would always start fighting so there is no way to truly come out on top.

Here’s why the film didn’t work for me. I’m already not a big fan of most kid characters in these kinds of things. Kids can be pretty annoying and it’s hard to take them seriously. It’s rare to have a kid character who is really on the ball and talking with eloquent dialogue. That is not the case in this film. The gangster accents work pretty well as they are fairly realistic so I have to give a good amount of credit for that. Aside from that I just couldn’t take them seriously. The film would have ironically been far superior if the characters had all been adults. The way I see it, the kids part was a gimmick that the film was leaning on. It didn’t pan out. After the initial few minutes you’re over this “twist” and are ready to go back to the actual movie.

The movie also ends up being rather boring as a result. The characters go through the motions but kids have a really hard time being funny or engaging. I don’t think you’ll even crack a smile from start to finish while watching this movie. The romance plot is pretty terrible with the characters both being unreasonable. The gangsters are villains of course, but they’re not even charismatic so it’s not like you can really root for them. So the film didn’t have engaging characters, had fairly subpar writing and the pacing was pretty bad. There’s really not much left to salvage it.

It’s still not a 2 or lower because it’s not like there was any terrible content here. It’s still pretty kid friendly and as I mentioned the film tries to be ambitious, it just doesn’t work. Ah yes, did I mention this was a musical? We get quite a few songs here. There’s the one from the kid who wants people to recognize that he is a tap dancer so he goes on a long tangent about this. There’s a big one in the climax as all of the gang members sing around and try to have a good time, etc. None of the songs are all that good and certainly pale in comparison to the classic Disney songs.

Overall, Bugsy Malone was certainly an experimental film. You can always make the case that it’s good to try new things out even if it doesn’t work out. It’s a tough case but I understand the logic. Eventually you’ll hopefully find a formula that works out, but this isn’t it. Even if you’re a big fan of gangster films I would advise you to stay far away from this one. The fact that it goes through every typical gangster plot doesn’t really help its case because you could just watch one of those instead of this one. Bugsy Malone is not exciting or engaging and if anything it’ll just make you want to watch a real gangster film. Kids can’t hold their own films and if I ever need to give someone proof of that I’ll have them watch this film. It’s the easiest way to explain why this is the case.