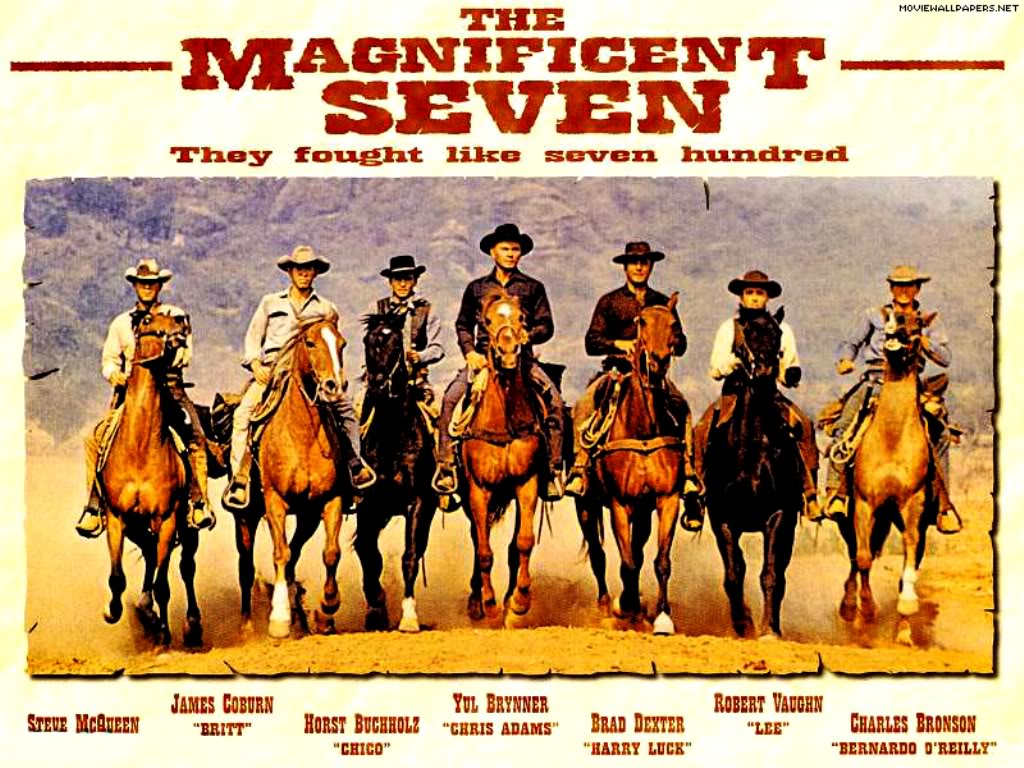 It’s time to take a look at a classic western from a while back. The Magnificent Seven is known as one of the all time great westerns and I can see why. It may even rank up there as my favorite one in the genre as at the moment it beats all of the others that I can think of. The fights are very good and I liked seeing the team get former Avengers style. This is a movie that has held up quite well.

The film starts with a village getting harassed and robbed by a group of bandits. They show up every year to steal all of the crops, livestock, and possessions that the village has. The village is fed up with this but they don’t know what they can do against such foes. 3 farmers head off into town to find some good guns to buy and see two impressive gunmen. The farmers ask one of them for help and the guy agrees to do so. Furthermore he will look for 6 more so the 7 of them can team up against the bandits. They will wait at the village until the villains arrive. The odds aren’t great at 40-7 but each of these 7 is worth a full squad.

One of the best aspects of this film is how it takes time during each aspect of the plot so you really get to know all of the characters. Each member gets a full introduction scene where you immediately get a feel for what kind of person the character is. The first two to be introduced are the two most important characters, Chris and Vin. They manage to survive an onslaught of villagers so that someone who died can be buried. The village hadn’t let him be buried earlier because the town was quite racist back in these days so the heroes showed them what was up. Another gunman is introduced as the quickest shot in the west who just wants to better himself. Another one is hard on money, one’s a fugitive, etc. Each of these shooters is given quite a lot of hype in their debut appearance.

Then you’ve got Chico who isn’t a pro like the others, but he really wants to be acknowledged as one of the more powerful fighters. He gets humiliated by Chris early on but doesn’t let that get to him. As the film goes on he shows more and more why he can be relied upon as well. By the end of the film I’d say he probably isn’t even the weakest member. He’s probably be around 5th place out of the 7. Not amazing or anything, but considering how young he is that’s pretty good.

The writing in the film is definitely on point. We get a lot of snappy dialogue and all of the characters are written well to be realistic and professional at all times. They’re just fun/charismatic characters to have around. The pacing of the film is great as I mentioned as well. I also enjoyed the gun fights. They last for a while but there is always something happening so I wouldn’t say that they dragged on at any point. If I have one complaint, it’s that the 7 should have done a little better based on how good they all were individually. It felt like they were mowing the villains down but by the end they were still heavily outnumbered.

The film also did stretch your disbelief a bit towards the end. The main villain captures all of the heroes and instead of shooting them all he spares them all…and gives them back their guns. Naturally the heroes return and slaughter all of the villains so it makes you wonder…why would the villain do this? It made no sense. The villain tries to justify this by saying that if he murdered them it’d be more work but I can’t buy that. He was prepared to murder them just a few minutes earlier. It was not a smart play and it felt like the writers had written themselves into a hole and took this as their quick out. If you ask me it’s not a situation you should put the heroes in. The villain deciding to spare everyone is usually pretty cheesy as it is. Giving them back their weapons is a whole other level of this.

The ending is definitely pretty emotional though as the body count gets quite high. It’s a pretty ambitious ending as you can’t always have everyone make it out in one piece. This is the realistic outcome of a big war type event. You can tell that this kind of film really doesn’t need a sequel. It got a few anyway but this film works quite well as a stand alone. It’s long and so there is a lot of content here. Everyone has a satisfying character arc to go through as well.

Chris was my favorite character. He’s just a solid leader in general. He’s all business and a great shot. While the film hints that he may not be the best shot out of the 7, he’s certainly one of the best. His partner Vin was also very likable. He was the first person to aid Chris in his quest and was also pretty fearless. While Chico had a rough start with getting drunk and all, he did prove himself by the end of the film. With him to protect the village you figure they would be safe from now on….in theory.

Harry’s the worst member of the 7. Not only are his skills not all that impressive but he’s only here for the money and doesn’t seem to care about anything else. I wouldn’t trust him at all. Bernardo probably gets one of the smaller roles in the film but he was a likable guy. He was sure to protect the kids to the end and seemed to quietly be quite a good shot as well. Britt was the most impressive marksman to me thanks to his quick draw skills. The guy could hit someone from a very long distance and was also good with a knife. Finally you have Lee who was more in line with Harry. Based on his intro I was expecting a whole lot out of Lee and he really didn’t live up to any of his potential. Even by the end I wasn’t really sold on his character. So I really liked 5/7 of the gunmen with the other 2 being fairly weak in comparison.

As always though the villagers were the most annoying characters. It seems like in every wild west film it’s a given that they will betray the leads at some point. They want to give up halfway which is the worst time to give up. Don’t they realize that this will just make the enemies go at them even harder? They try to say that the villains won’t hurt them if they give up quietly but we know this isn’t the case. They’ve already been harming the village from the start and it would only get worse. These guys lack any real intelligence at times like this. The only good ones were the village elder and the main 3 guys. The girl at the end of the film was also good. The rest of the men would just hide when the villains showed up and cracked pretty quickly so I can’t say that they ranked.

Overall, The Magnificent Seven was quite impressive. The horses managed to live through the fights which is usually my worry with the genre and in general the film avoided making any key mistakes. It wasn’t gritty and the characters were actually quite solid. This is definitely the gold standard for westerns and if you haven’t watched this film yet then you should definitely change that. It’s going to be very difficult for the sequels to quite match up to this one.