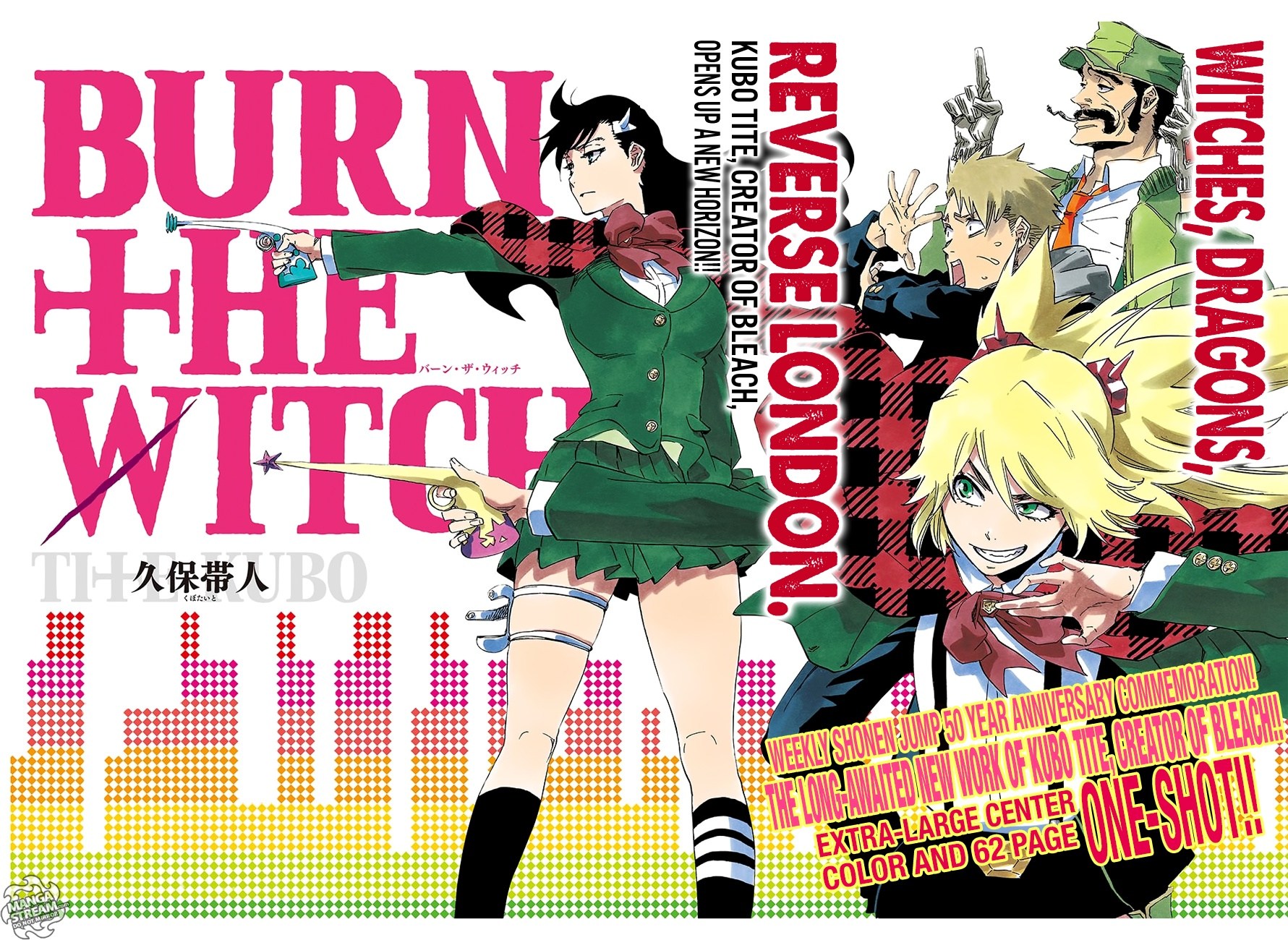 It’s time to take a look at the new title that Kubo is working on. Currently it is just a one shot so I took a look and figured I’d review this one. Bleach is one of the greatest manga of all time so I’m expecting similar quality from Burn The Witch. It’s hard for a manga to start off being a masterpiece though and this one will clearly need some extra time to work things out. The one shot was not nearly as good as I had been expecting thanks in large part to an annoying character who seems like he’ll be one of the main cast.

The special starts by introducing us to Noel. She is one of the two leads and is always pretty deadpan about everything. She works in the London branch of Soul Society and her mission is to destroy all dragons. She has to deal with constant harassment from her best friend Balgo though who is as shameless as they come. After losing him she meets up with her teammate/superior Spangcole and they are given a new assignment. It turns out that some dragons are near Noel’s home. Balgo may be in danger now so the heroines head over to save them. The question is….should she save Balgo? The guy’s pretty cheap so they may want to re think that.

Balgo is really my main problem with the series. Every scene with him is pretty brutal. He’s only got Noel on his mind and only in a very superficial way. While this is supposed to be comedic it definitely falls short of that and becomes irritating almost instantly. There is just no way you can root for the guy or even feel bad for him. The dynamic that the series is going for completely falls flat and it will heavily limit Burn The Witch’s potential. I’m hoping that he will ultimately get written out and was just made up for the opening pilot. They’ve gotta get rid of him.

His best friend Selvie in comparison seems a lot more reasonable. He’s always pretty tired of Balgo’s antics and just wants to live a normal life. He gets a pretty big role in this chapter and is a solid character. I’d like to see more of him. From the main two, Spangcole’s my favorite character so far. She’s definitely the loud character of the duo and is constantly talking big. Skill-wise I assume she is a little stronger than Noel, but it’s far too soon to say. Confidence does go a long way though and I think that should help her out a lot in the long term.

Then Noel’s a solid character as well. She’s a lot more of the quiet type than Spangcole, but she gets the job done when they need to fight so that’s what counts. Interestingly it’s still hard to really nail down Spangcole and Noel’s characters though. You get their basic personalities, but the title goes by so fast that they haven’t shown you too much yet. That’s a good thing in that it means they won’t be two dimensional. The plot with the dragons is also interested. Despite being called that, most of the enemies don’t look like dragons. They are basically shape shifters who take over the bodies of the dead. If you get hit by a train for example one will hop in your body and pretend that you just barely rolled out of the way. There’s no real way for humans to tell the dragons apart from the actual person so it does put them in a lot of danger. I could easily see the series becoming part horror due to that.

There’s a lot of good potential to the overall premise so I can definitely see this becoming a long running title. The artwork is definitely solid and should remind you of Bleach right away. I’m hoping we can see the regular Bleach cast make guest star appearances at some point though. We’ll likely need to hold off on that until the main characters get a power up though because right now they are far too weak to have many real interactions with that group. There’s plenty of time to buff them up though so I would hardly even call that a real concern. Eventually characters always power up.

Overall, I’ll be interested to see where Burn The Witch goes from here. I’m hoping that the movie is able to correct the weaknesses of the manga though. There isn’t really any fanservice so it’s not like that’s an issue but every scene with Balgo is just super annoying. It takes away from moments where the other characters could be shining instead and that is always preferable. If you’re a huge Bleach fan then you should check this out, but just know that there isn’t really even a connection to Bleach yet besides the universe. I expect we’ll have to wait a while for a true crossover which makes sense because you can build the characters up more that way.

1 thought on “Burn The Witch Review”