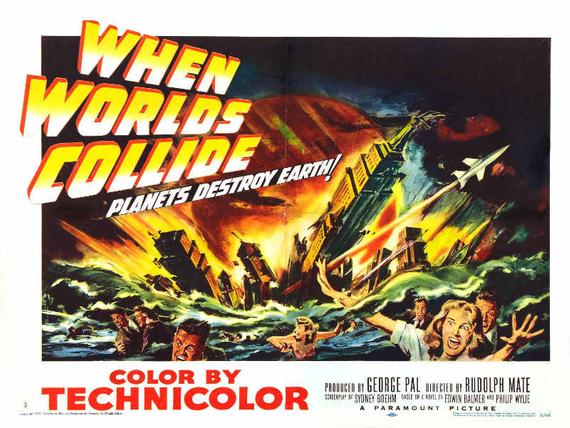 It’s time to look at a sci-fi film from the 1950s. This one’s definitely pretty old but holds up quite well to this day. There are some fun characters here although one definitely goes off the deep end to me by the end. The romance is rather weak but everything pertaining to the actual world about to blow up plot is quite interesting. I’d definitely recommend a look at it if you ever happen to see it airing on TV. It’s a fun adventure.

The movie starts with Randall being given a top secret mission. He is to deliver some secret photographs to a Mr. Hendron and shouldn’t ask any questions. Randall finds this a bit odd but they are paying well for this mission to he heads over. Hendron’s daughter spills the beans by mistake though and admits that the world is going to be destroyed. Once at base Randall finds out the full story. The Earth is going to be hit by a new star/planet and they will all be dead in a year. To that end Hendron is going to build a rocket to get 40 people off the Earth safely. It’s a good plan but Randall feels as though he is not qualified to be a part of the crew and is only being included because Joyce likes him. What is he to do?

The plot of the Earth being doomed is nothing new, but it’s such a great premise that you can make a lot of very good films about it. I’m sure there weren’t quite as many in 1951 either so this may very well have been the template for a lot of them. It’s handled really well with a lot of the film being about the build up to the big day. In general the best disaster films are ones that take place during the end of the world or right before with characters panicking a lot. The ones that have a good chunk of action after the event would typically be weaker. I like to see the build up myself and the film does a good job with it.

From the summit meeting to casual conversations it’s nice to see everyone’s takes. One of the men who ends up funding Hendron’s rocket is a guy named Stanton. He’s definitely the main antagonist in the film but easily the most enjoyable character. He has more of a cynical view on society and believes everyone will ultimately break down and attack once the day approaches. He really isn’t wrong either. It’s one of those times where you may not wish he was right, but it’s definitely the most likely solution. When the chips are down people tend to go into survival mode. Fortunately Stanton was right and even had his gun at the ready. The scene where he turns the tables on someone was very good.

It actually makes the ending pretty emotional. Stanton planned out everything really well except the betrayal at the end. It’s why it is very tragic when you have to rely on someone else for help and can no longer just save yourself. There was no way Stanton could possibly escape once Hendron decided to sabotage him and it’s the most emotional scene in the film. You can feel Stanton’s frustration there especially since he no longer had his gun. Hendron’s a pretty rational guy, but I thought he definitely crossed the line there. Deciding to stay is one thing, but forcing someone else as well is definitely another. That makes him a total murderer there. At least it’ll be a quick death on Earth. Personally I would rather stay there and die than travel in space for who knows how long and most likely die a much slower death. At least on Earth it’ll be quick.

The only weak part of the film is the romance triangle between Joyce, Tony, and Randall. Joyce and Tony were about to be married before Randall broke into the scene. Joyce then moved on from Tony and decided that she liked Randall instead. Look, it’s totally valid to move on from someone if you aren’t wed yet. I would argue it meant that she never liked Tony all that much though. I don’t see how you could be ready to marry someone and then fall for someone else. It seems very shallow to me as in you are just judging by appearances at that point. Tony does his best but it’s obvious from the minute Randall appears that it’s over for him. Ultimately Tony is a good sport about it and handles the situation quite well.

Randall is more obnoxious though. He openly flirts with Joyce even while she is literally dancing with Tony and is always staring at her. They make Tony feel terrible throughout the movie and the guy can just never catch a break. Randall even bursts in to where Joyce is while she’s serving food to mess around a bit while poor Tony is watching on the security cams. Despite all of this, Randall was also planning not to go into space for quite a while. That would have left Tony and Joyce together again but with both of them knowing that this is the backup choice which isn’t ideal. Yeah, I just didn’t like Randall.

The same is true for Joyce. She was just moving around way too much. It’s good that she realized Tony wasn’t the right guy for her but she should have told that to him directly instead of brushing him off to be with Randall the whole time. She led him on until the literal last second and even then she didn’t tell him, Randall had to be the one to basically break things off. Joyce needed to make a decision as not making a decision is the worst thing you can do to the guy. I think the film would have been just fine without having any kind of romance plot. The actual story and writing were strong enough to make do without it.

Overall, When Worlds Collide is a very solid film. It’s nice to see all of the characters rationally discussing their options and trying to save at least some people. The World Summit meeting was also cool and it was nice to see the old school translators. I wonder if they still do that, I imagine they would since having a machine translate wouldn’t be nearly as accurate even with today’s technology. Some things are just better in person and I expect it’ll be many years before a machine can quite keep up. If you haven’t seen this movie yet then you should change that.