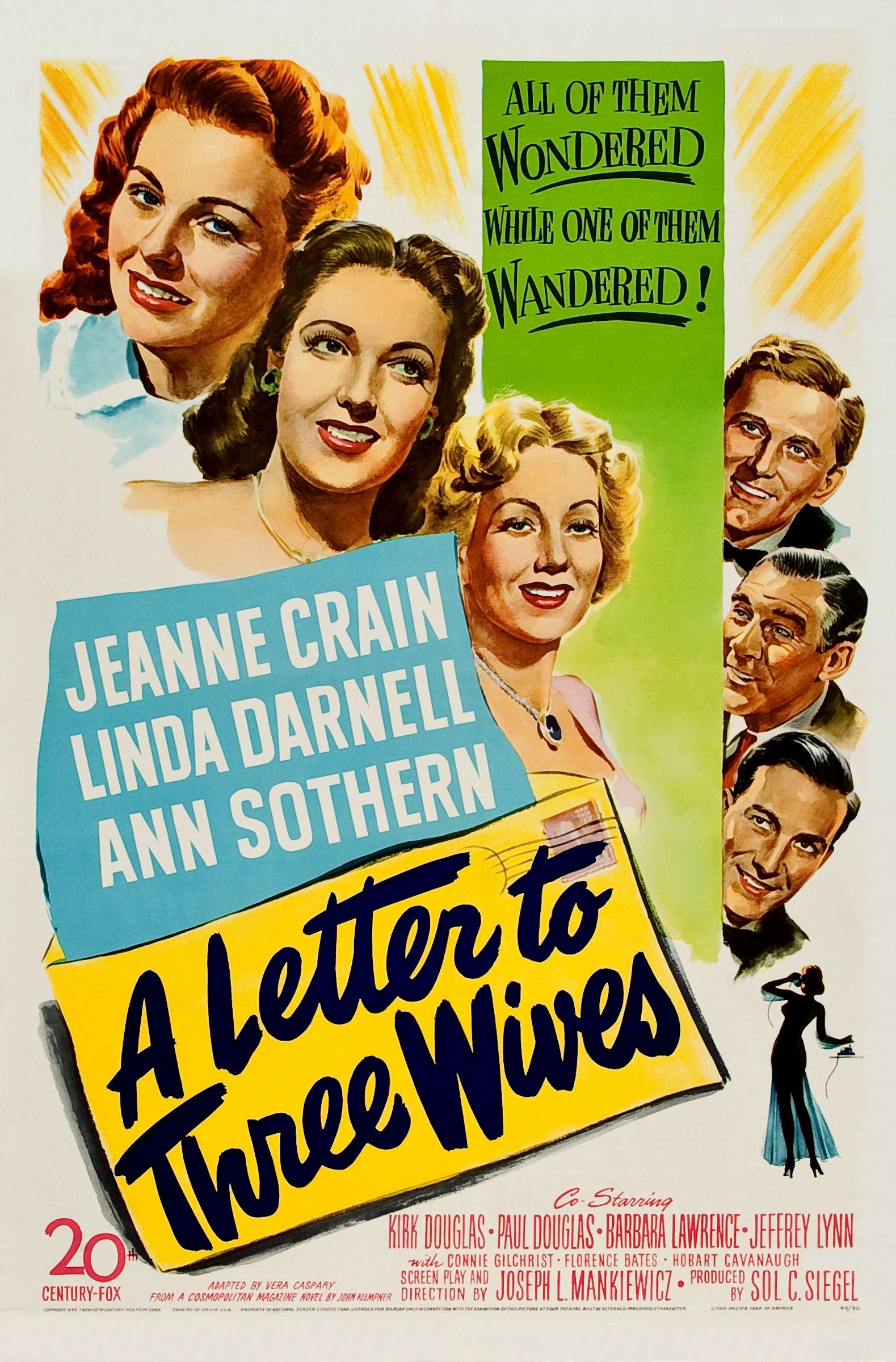 It’s time to take a look at a retro movie with a moral about trust and understanding. With the basic premise at hand the film gives you all you need in order to crack the case of what’s going on here. I dare say that it starts to become apparent after the first story but even then you can still make cases for exactly what Addie’s plans were. You could make her out to be the hero or villain depending on how you look at it. I’m in the former’s side.

The movie starts with Addie explaining to the viewers that she’s the best person who ever lived and holds the moral high ground. The 3 main heroines are all pretty jealous of her because Addie seems to be the perfect person. As the ladies husbands would say, she always knows to do the right thing at the right time. As a result the ladies never liked Addie much although they wouldn’t say that to her face. Well, Addie has sent them a note saying that she has run off with one of their husbands. The 3 wives are trapped on a cruise and can’t get back home but they are all worried that their man has left. Each of them has a flashback to a memorable day in their relationship and wonder if it could possibly be true.

In a way the story is an anthology as each story takes up a good amount of time so we don’t see the present much. The first story is about Brad and Deborah. Deb is feeling a lot of pressure because she thinks that she can’t keep up with Brad’s city friends. She grew up as a country girl and isn’t very confident in her appearance and mannerisms. This ends up getting worse as she gets super drunk before the meetup and also has a mild costume malfunction. She misses enough of the party to where Addie ends up chatting with Brad instead.

It’s a pretty solid first story and underscores that Brad is a really nice guy. He’s pretty understanding of Deborah’s worries the whole time. We also get to see his two friends who will star in the second story and they’re very nice as well. They do everything they can to cheer Deborah up and I dare say that they easily have the best dynamic of the 3. Deborah’s lack of confidence can be a bit iffy at times especially with how much she drinks. It also turns into her not trusting Brad as much as she should because she does think he would trade up to Addie if possible.

Next up is George and Rita. Rita is determined to impress her boss by hosting a very fancy dinner party while George isn’t a fan of the idea because he doesn’t like having a false pretense. I do agree with him here as I never believed in making the place really fancy when guests were coming over either. In modern times this has slowly stopped being a thing, but there are still many cases where you do a huge cleaning and re-stocking before someone comes over. In a way the best way to handle this is to have the guest see the place as it usually is. George does his best to work around this but the guests are quite rude and even break his personal record. It turned into a pretty trying day for him and Rita even forgot his Birthday. Fortunately Addie didn’t so she sent him a priceless record with a reference to their youth although this makes Rita jealous as well.

While Rita definitely went through a difficult day there, she is still a pretty likable character throughout the movie. She’s a very supportive friend and I do think she and George got along quite well whenever we saw them. George is a fun character who always sees the glass as half full. Despite all the crazy stuff that happens to him, he keeps up a smile throughout. From the 3 guys he was definitely the best one.

Then we have the third story about Lora and Porter. Lora is pretty poor at the moment so she decides to land the boss of her company after he reaches out to her with obvious goals in mind. She plays hard to get in order to win him over and get married. It works in a very transactional way. Both of them are too proud to admit to the other that the feeling is genuine. Partially they are also afraid to say this in case the other were to laugh so as a result their marriage isn’t a very happy one. Throughout the film they’re constantly trading a lot of barbs. In particular Porter is often pretty disrespectful. Lora’s a strong woman so she doesn’t lose her confidence despite this but it’s a pretty unhealthy dynamic.

The film works to give them some development here but even by the end the pairing was the weakest. Porter is a pretty fun character when outside of the marriage but with Lora most of his scenes are pretty mean spirited. Meanwhile Lora is the most fun member of the 3 wives. In some respects she is one of the scarier people to run into with how manipulative she is. If she didn’t like Porter then she could have put her plan into action pretty easily by marrying him and then running off. If you’re rich you always got to be careful when getting into a relationship. Of course, Lora actually wasn’t mean spirited like that and is just a very independent character.

One thing that’s pretty telling in the film is that none of the 3 characters trusted their husbands as much as you would expect. They had a lot of doubts the whole time so their relationships clearly weren’t all that strong. The film gives them development there but even to the end two of them are absolutely certain on the fact that their husbands ran away. You can’t have a good relationship without trust so that’s something for them to work towards. On the other side George and Brad seem like very reasonable and forgiving characters. They’re pretty down to Earth and don’t let things get to them. Part of why the writing in the film is so good is because most of the characters are pretty reasonable.

So I won’t spoil who left off with Addie. I can say that we never actually see her though as the film keeps her intentionally out of sight. I was expecting that pretty early on though because it just feels like the kind of thing the film would do. In a sense, seeing her would be difficult for the audience to see what all the fuss was about. This way she keeps her mystery. Now, why do I think she was more of a good guy? Well, she’s clearly the nicest and most respectable member of the group. Unlike the various gossipers in town she has no time for that and is always doing nice things for everyone. She remembers birthdays, doesn’t have any drama, and is very respectable. I believe that she saw things weren’t going super well for the 3 couples and decided to do something that would shake things up in their lives.

Nobody holds onto something tighter than when it’s about to be taken away. I don’t typically order desserts at Popeyes because their chicken is fantastic and I can always bake some cookies at home. However, when I heard that Fried Oreos were only going to be around for a few weeks I bought a bunch of them. It’s the same concept here more or less. Now that Addie is threatening to take the guys away the 3 main characters may look at things in a different light. The only threat to this is a proclamation from one of the guys near the end. My answer to that? The guy’s definitely lying. Either he helped cook up the scheme with Addie or he just said what he said to make someone feel better. I just don’t think his event actually happened. In short, that’s why Addie was the hero of this story and also the best character in the film.

In general I’m also against the notion that you can’t have a female friend. By making Addie into someone who ended up wanting something more then that’s a shame. Especially with a lot of these old films being about cheating it seems like that is the inevitable outcome if you’re friends with someone who is single but it’s a dangerous rhetoric. That’s why it’s good to have Addie here to put a stop to all this nonsense.

Overall, A Letter to Three Wives is a pretty solid film. The movie’s pretty fun and all of the stories were solid although the third one is the weakest by far. It makes sense though because that plot seemed to be pretty weak from the jump as well. Still, the rest of the movie keeps the adventure up at a high level. If you’re looking for a classic mystery that actually isn’t a murder mystery then this is one of the rare ones to check out. It’s just a solid all around film with good writing and pacing.