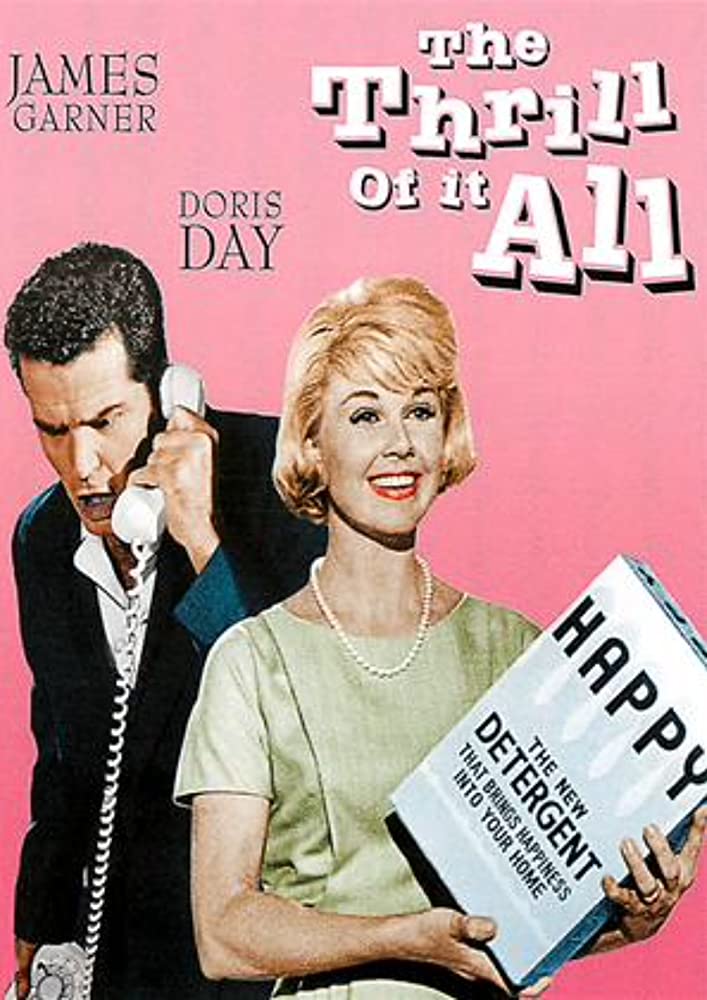 It’s time to look at a pretty old rom-com with Doris Day. This is a film with a pretty fun plot although the ending doesn’t really work so well. I’d say the main character ended up making the wrong call. Still, the writing is pretty strong as always and the humor is consistent. It’s a film that you’ll have a fun time watching even if it doesn’t end up being one of the all time greats or anything like that.

The movie starts with introducing us to Gerald who delivers a lot of babies. It’s pretty fun work and he’s really well known in the neighborhood. People just like the guy. Meanwhile his wife Beverly runs the home and does a good job of looking after their two kids who are always getting into mischief. Well, one day the two of them attend a little gathering and watch a commercial for a new soap. Beverly ends up telling a story about how she used the soap and the boss of the company immediately wants her to do the commercials. Beverly is reluctant at first but they will offer her a ton of money so she accepts. Beverly quickly becomes a sensation and now the company’s products are all flying off the shelves.

The family is doing really well financially but it’s having a social toll. Beverly and Gerald both work rather difficult hours now so they are never home. Gerald starts to become jealous at this point and realizes that he will have to find a way for Beverly to leave her job. He tries quite a lot of tricks to get her out. Will Beverly be able to keep her job or will she ultimately need to go back to being a housewife and leaving this wealth on the table?

This film came out quite a long time ago, but even so it’s hard to really sympathize with Gerald all that much. He gets on her case about this almost right away so at that point the hours and such hadn’t been an issue yet. He just didn’t want her to leave the house for a job and seemed pretty proud of it. What hurt his case right out of the gate was when Beverly produced an article he wrote about how women should explore career opportunities to find fulfillment. He quickly says that it didn’t apply to her which isn’t really much of a counter argument. He really tries every trick in the book to get her back so Gerald looks bad throughout the whole movie. Particularly as a lot of the things he would get upset about weren’t even directly Beverly’s fault. The studio had a tendency to take things into their own hands which would ultimately backfire.

Gerald’s tricks could also get a bit dirty at times like pretending that he was cheating on Beverly. That’s certainly not something to do lightly and just makes him look pretty bad. Beverly was never doing anything like that. As a main character she’s pretty solid. The fame never even remotely goes to her head and she handles all of this like a class act. She still has to work with the kids throughout this at times so she’s busier than ever. Beverly may not always be able to make the times work for everyone but at least she tries. It’s also pretty honest work. It’s not like there’s anything remotely sketchy about her line of business. It’s advertising for a very reputable company.

The company also desperately needed Beverly. Their current commercials were really using quite desperate measures to try and sell the soap which would not work on most of the viewers. After all, the guys who would fall for these tactics aren’t likely to buy soap. It’s worth noting that this is another scene that makes Gerald look quite bad. Come to think of it, the guy definitely has a lot of unfortunate mishaps throughout which make me root for Beverly even further. I think the main things he could reasonably get upset about was the studio taking over his home and the big swimming pool destroying the backyard so he can’t golf anymore. Those are pretty sudden and hard to adapt too.

As this encompasses the main plot , Gerald’s jealousy is the only thing that holds the film back. From the start you already know how this is going to end which is unfortunate. The film could have definitely have had a better ending. It’s not an ending that wrecks the film though. Either way I thought it was pretty fun and the writing is on point as always. The cast of characters are fun and even if Gerald is on the wrong side, he has a lot of fun moments as well. The Thrill of It All as a very quick pace about it so something is always happening during the movie. That’s always been an important aspect for any film.

Overall, The Thrill of It All may be dated in many respects, but it’s a movie that is worth watching. It tackles some nice topics like how people are still quick to buy things if they see it in a commercial. For me commercials are mostly pointless for products but if it’s a food commercial then I’m in. I think everyone has something that they are willing to look into further if it’s on a commercial. The film also pokes fun at how some shows would use the same plots over and over again and the audience doesn’t catch on. It’s pretty exaggerated but definitely fun to see. I’m always up for a few good natured shots thrown in. If you’re up for a fun little film about getting rich overnight then this is a solid one to check out. Who hasn’t thought about suddenly being on TV like this?