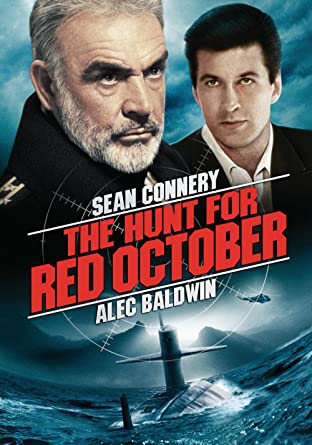 I remember seeing this film a very long time ago. It’s a pretty fun thriller featuring the classic match up of USA vs Russia. It makes for a pretty solid film and definitely an exciting one from start to finish. There’s a good amount of action here and the writing is solid. I’m also always up for thrillers revolving around the government. I like to see the tech in action and the more “Professional” approach rather than the main characters fumbling around. This is a movie that you should definitely check out as everything about it has aged quite well.

The film starts off by introducing us to Captain Ramius. He commands the Red October, a powerful Russian sub that is armed to the teeth with nukes. What makes it particularly dangerous is the fact that it is nearly impossible to detect by normal means. The new camouflage tech allows it to appear anywhere without warning. Ramius murders the Russian soldier in charge of watching over him. He has gone rogue and is approaching the United States. What are his intentions? The Russians aim to destroy him before he can do anything crazy. Meanwhile Jack figures that Ramius is trying to defect to the U.S. but it is a pretty dangerous gamble. If he’s wrong, then it could very well be the end of the country in an instant. There would be nothing they could do at that point since the enemy would be too close.

As you can probably guess there is quite a lot of strategy going into all of this. The heroes have to consider a lot of different angles here. They’re definitely reluctant to believe in the defecting angle and you can’t really blame them. It is a really risky endeavor and as much as Jack says he met Ramius once that doesn’t really mean anything. You can’t possibly grow to understand someone upon meeting them once. Everyone has many faces that they use in society and the man that Jack met was simply one face. His true intentions would still be a complete mystery.

While Jack’s approach may be a bit naive, he is certainly a qualified agent who came up with a solid theory he could back. Jack did a lot of work in finding out about this from the start. He may not be a big fighter, but he does whatever he needs to in order to claim victory. He’s a solid lead even if he’s not particularly exceptional. Not standing out probably helps in espionage anyway. Ramius is the main villain here and makes for a good counter. He’s clearly quite experienced in commanding a fleet and knows tactics well. Even when the rest of the crew are panicking Ramius always keeps his cool. He’s not the kind of guy to panic at every little thing the way that the rest do. He’s quite interesting.

Part of the film’s strength is in how smooth the writing is. It’s very good and keeps you interested throughout. There are a lot of moving pieces here and despite both countries being quite hostile with each other they have to keep up a pretense of kinship among them. That leads to a lot of layered conversations. In particular I liked the U.S. Embassy representative as he did a good job of keeping up the pretense while delivering some passive aggressive statements. He did a good job of not giving up any ground or giving up intel.

Aside from Jack’s deduction we also had another U.S. sub in the area which looked good. One of the workers there was able to accurately find a way of locating the Russian sub which was impressive. If Jack had not shown up at least that means the U.S. would have been able to take out the Russian sub before it made it to America. Of course there would have been quite a great deal more casualties if that had occurred so it wouldn’t have been the ideal outcome. I’m just glad the whole thing didn’t hinge on him stepping in. Either way America would not have gone down without a fight.

The final fight does come out of nowhere a bit but I was glad that the film wanted to give us a quick action scene. I’m always up for some action so this was a pretty good way to close out the film. It may not have been a very long fight but it was a way to give Jack a quick moment to shine and also delivers on making things pretty exciting. The film really made no mistakes and had a very solid opening act, middle, and climax.

Overall, The Hunt for Red October is definitely a really solid thriller. I’m always up for films about the tensions between U.S. and Russia. It makes for pretty intense story lines and I can definitely go for more thrillers about subs. I’m not a big fan of the water in general as a backdrop, but being underneath the water is a very different matter. It reminds me of the classic Battleship type game. There are only so many options you can use while in a sub so the thriller parts aren’t so much about the fights as the setups to them. You need to have good writing for that and this film certainly delivers. It’s a long film but one that doesn’t drag on.