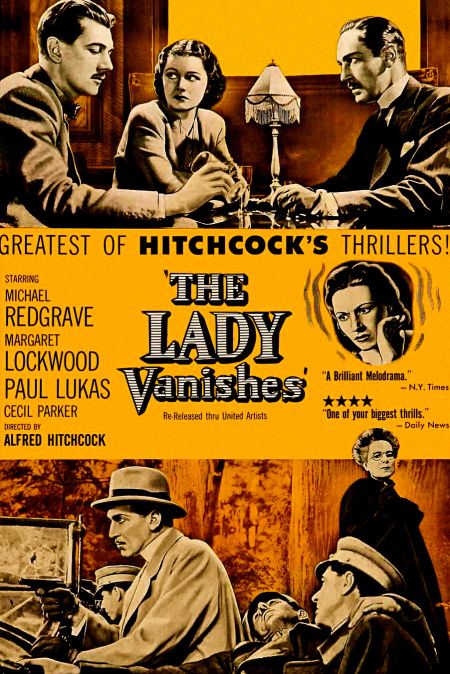 It’s time to look at a very old school thriller mystery. It certainly goes down a few unexpected paths and makes for a pretty enjoyable experience. As with all movies where someone vanishes you do have to suspend a little disbelief with how this would have worked out at all. That said, the movie makes a better attempt to hide this than most do. At least we do have a few characters who saw things and for their own selfish reasons are just pretending that they didn’t. That’s more of a plot point that I can get behind.

The movie starts with some train delays so Iris and a lot of other people are forced to spend the night at a hotel. Iris is with two of her friends so it’s a nice enough stay but their upstairs neighbor is making a lot of noise. Iris complains and the guy (Gilbert) retaliates by breaking into her room and making a mess of things. Iris is pretty happy to leave but on the way to the train she is nearly murdered by a falling rock that was seemingly aimed at an old lady by the name of Ms. Froy. Froy is also taking the train to she gets on with Iris. Unfortunately after Iris takes a nap Froy is gone and everyone claims she was never there. Iris needs to find some proof and fast because this could all be a part of some kind of conspiracy.

Iris and Froy didn’t do a whole lot after they got on the train but enough where you’d expect a good amount of witnesses. They went to the cabin to have some tea and even had a brief polite spat with Charters and Caldicott so I’m sure some people would have noticed this. Again, we do have at least 4 characters who saw them but have motives for not saying. For reasons involving the twist we can’t count everyone in the car so it’s a limited pool. That’s why, while I don’t 100% buy this, the film put in a great effort compared to most. I can definitely respect the hustle there.

Speaking of twists, the film also did good by not letting you know who the true main character was for a while. In Act 1 Charters and Caldicott gets much more screen time than Iris. They’re too comedic characters who just want to know what’s going on with the cricket matches but nobody is able to assist them. It’s definitely not the most popular sport out there although I know a few big fans. As a result you expect these guys to be in the thick of it but when the situation comes to them, surprisingly they lie their way out of it. I was pretty shocked since that seemed primed to be their big moment where they jump in and take center stage. That was a solid flip the script kind of moment if I’ve ever seen one.

As the actual main character, Iris does a pretty good job of holding the movie pretty well. She’s a nice character and definitely a determined one as she doesn’t buy into the deceptions that Froy was never really there. I’m pretty glad about that because I always thought it was rather weak to believe the opposite of what you saw with your own eyes. Let’s bee real about this, if you see something then you shouldn’t be convinced otherwise. That’s one of those things I always have to shake my head at when it happens. Iris was also quick to get with the program when the climax occurs.

Some characters were not quite so lucky with this. When people are actually shooting at you then the time for talking is certainly past. You have to fire back and a few of the characters here were definitely super naive. That said, the climax was definitely a lot of fun. It was pretty high energy throughout and a lot was happening at any given time. The whole conspiracy was a bit bigger than I had suspected. The film was pretty low key for most of its run but I’ll never turn down a sequence of solid action scenes.

The main guy is a bit on the iffy side. Gilbert is pretty petty with breaking into Iris’ room the way that he did. It may have ended up turning out all right but it’s the kind of thing that would definitely not fly over very well if it actually happened. This leads us to a pretty rushed romance plot. Keep in mind that Iris already has a fiance so that’s pretty hard to buy into. She basically dumps him for no real reason. We barely even got to meet the guy which is pretty crazy. They could have just as easily written the film so that he didn’t exist and nothing would change. The romance is definitely not the best here but fortunately that plays a very small role.

I’d consider the writing in the film to generally be pretty solid. It has good pacing throughout and a nice set of characters. The film plays itself out a bit as an ensemble kind of movie with each character having his own plot and story to get back to. They all end up mixing together by the end of the experience so all of the characters feel pretty real. The movie doesn’t drag on and actually manages to capture quite a lot of story within the runtime. Mix that together with the explosive climax and you’ve got yourself a very satisfying ending.

Overall, The Lady Vanishes is a pretty solid movie. I’d definitely recommend it as this is a mystery film which has aged really well over the years.Some of the twists are still a bit unexpected which goes into how smooth the execution is. Gilbert does have a terrible final scene though as he ends up slipping on the most important assignment he was given. It’s one of those things that you just don’t do. You’ve got to at least make sure you get that right. Fortunately the real hero was ready to help as things could have gone badly otherwise.