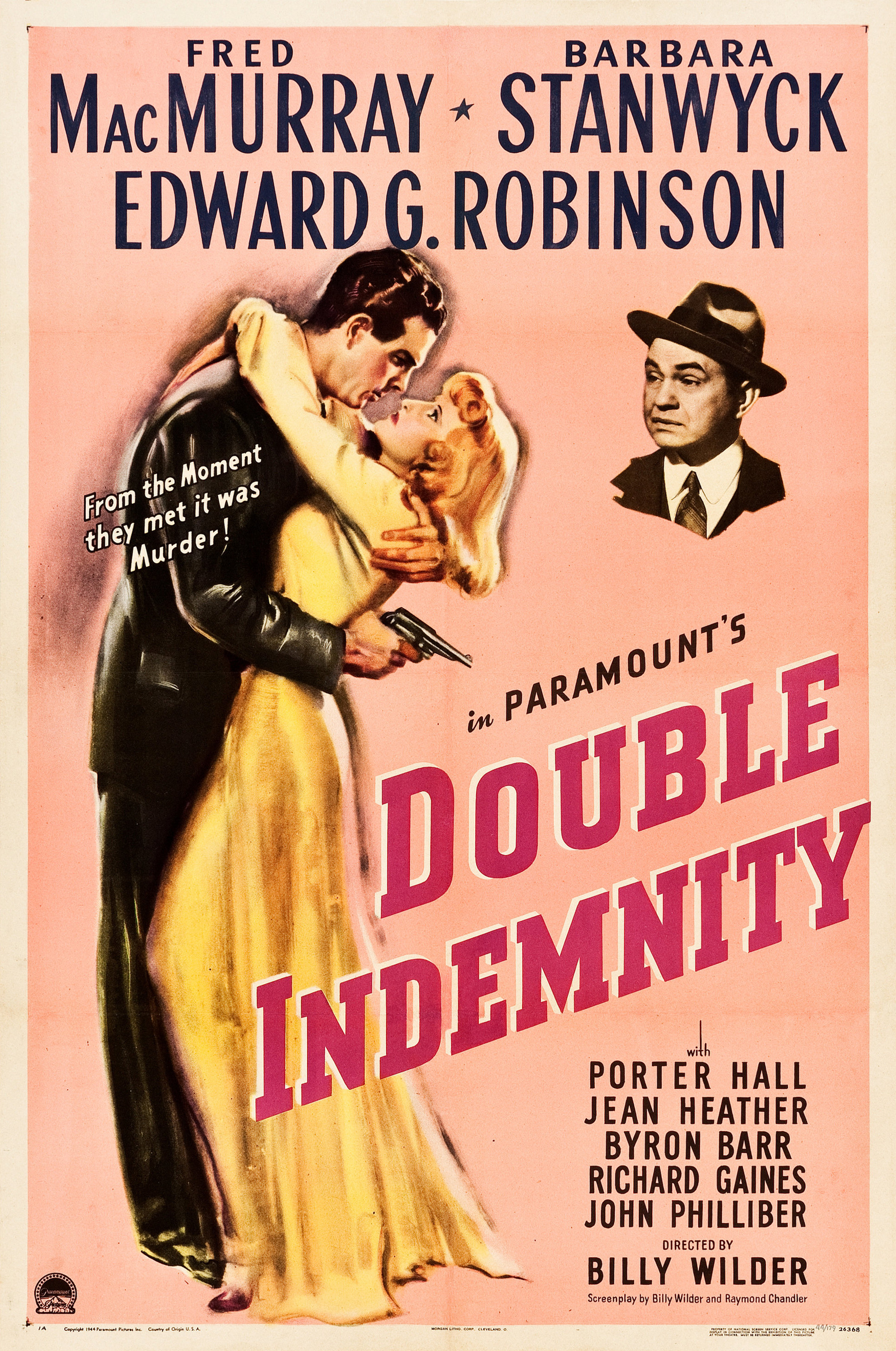 It’s time to take a look at a retro noir film. This is one of those titles where you should be rooting against the main character from the jump. He’s definitely not one of the more trust worthy guys out there and ends up making a lot of foolish mistakes. It’s a good movie though with a fun plot and a lot going on. I also always enjoyed the noir narration going on throughout the movie. That’s something I’d like to see make a comeback in the modern movies at some point. It’s just a fun thing to do.

The movie starts with Walter trying to track down someone whose insurance is about to expire. Walter always likes to stay on top of these things after all as he is one of the best insurance people in the business. When he gets to the house the guy isn’t there, but his wife Phyllis is. She figures him as an easy sucker to manipulate and she’s right as Walter immediately ignores the fact that she’s married to make a move. She reciprocates and lets him know that all Walter needs to do is help her bump off her husband so they can get rich off the insurance. Walter likes the sound of this and the two of them start planning. Can they bump this guy off and get rich without the expert Mr. Keyes finding out about this?

Keyes is the best character here. He’s always been really good at cracking down on criminals who try this kind of scam. Whenever someone submits a fake insurance claim he catches them in the act. It’s all because of the “little guy” who is basically his heart that lets him know when someone’s not being straight with him. Walter figures that he’s worked with Keyes for over 10 years so he can keep him in the dark. It’s a pretty high stakes gamble though but he’s already in it pretty deep and decides to go for the gold anyway.

So right away there’s no doubt about it. Walter’s one of the antagonists just as much as Phyllis. Only difference between them is Walter did it partially for Pyllis as well while she was just in it for the money. Walter tries to make a lot of justifications about it but at the end of the day he’s still pretty petty. His final plan was also pretty risky as Phyllis was one step ahead of him the whole time. He really underestimated her there and wasn’t even being all that subtle about what he was going to do. Closing all the windows and shades….really? He should have already known that Phyllis would be ready since the whole deal is that she’s pretty cunning.

The best parts of the film are definitely the cat and mouse games with Keyes. Keyes is always thinking up plan after plan to try and break down the story. There are quite a few similarities to Death Note here. At times Walter wonders if Keyes is on to him but is holding back to give Walter a chance to confess on his own. It gives you a lot to think about as you’re watching the film because this could really spin a lot of different ways. In terms of extra story beats, the only one I think we didn’t need was Lola’s plot. It makes Phyllis look pretty bad because of how obvious she was being.

So Phyllis was bumping off people left and right while trying on black to test it out? That’s the kind of thing you do when you’re trying to incriminate yourself, not when you’re trying to lie low. Lola ends up being a pretty big piece who could have blown the case wide open at any time. Instead she decides to keep quiet which is very fortunate for Phyllis but not very likely. At this point Phyllis bumped off both of her parents so what’ll it take for Lola to go to the cops? I think cutting her out of the film would have made sense. I suspect she was mainly there to give Walter some second thoughts about the whole thing.

Walter should have had second thoughts the moment he found out he was being the patsy in all of this though. He tries to play it off cool like most Noir characters by saying he didn’t care and all of that. I don’t really buy that for a second to be honest. Deep down he was hoping she really liked him and that was never going to work out. A romance built off of a murder is probably not going to last very long at all. He should have stuck to the content life of insurance selling. The company seemed really good to me to be honest and at least he had good friends. That’s not something he could say for after that. His final attempt was a bit odd but I guess at that point he was desperate.

Overall, Double Indemnity is a very solid film. While the main characters are pretty unlikable, you’ve got Keyes here to hold the whole thing together. Also, at least while Walter is a villain, it’s not like he’s portrayed as someone totally crazy that would hold the film back. He may be corrupt with all his justifications and all but at least he’s still got sound judgment which is needed for these battles of the mind. If you like Noir titles then this is definitely one to add to the books. It’s got a lot of different wrinkles to it and various story developments.