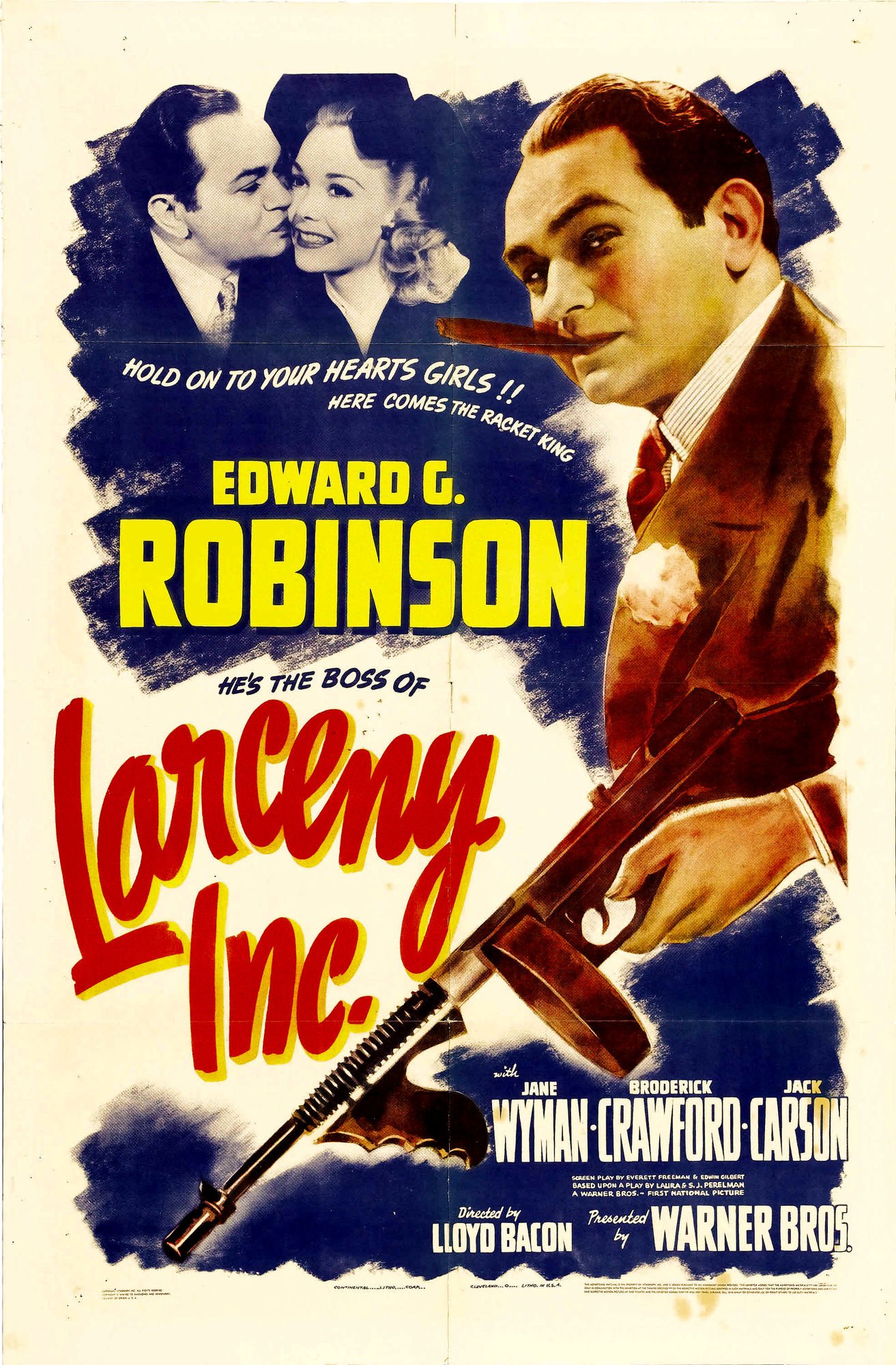 It’s time to look at a comedy film from a long time ago. It feels like the 40s were a whole lifetime ago at this point. As with most films from this era, Larceny Inc delivers with solid characters and quality writing throughout the adventure. It’s a pretty fun film that has a good amount of humor and even throws in a dangerous climax for the characters. How much you enjoy this film will really depend on how you enjoy the style of humor because if it’s not really your cup of tea then it goes without saying that this one isn’t going to rank all that highly for you.

The film starts with Pressure getting out of jail along with his friend Jug. They were given an offer to continue their life of crime but decided against it in order to finally go straight. Definitely a good move, but it’s going to be rather difficult to make a fresh start. Pressure tries a few things but they don’t work so he decides to break into a bank. What he’ll do is buy the luggage store next to the bank and dig a hole into it. The problem is that his daughter Denny has decided she can’t let Pressure make the same mistakes and teams up with local salesman Jeff to ensure that Pressure’s store is too busy for him to make any plans. They are going to make those luggages sell like hotcakes!

This is a comedy so you can’t take the story beats too seriously but I do have to say that it’s already a bit of a stretch how the heroes own this very successful store and then decide not to do anything about it. Even while waiting to rob the bank they could have sold a lot of luggage at a very good price. Instead they keep throwing them away or giving them out for free. It’s part of the comedy of course, but you can’t help but think how well off they are. If they had just been selling from the start they would have been free to abandon their plan a lot sooner. Of course we do get actual gangsters showing up near the end and I suspect that things wouldn’t have gone over well for the heroes if they had not had a hole in the building.

The pacing is pretty solid although the romance in the film isn’t particularly good. Jeff moves pretty quickly throughout and even asks Denny to marry him after only knowing her for a few minutes. Talk about mistaking a crush for true love right? That’s a pretty huge jump for him to take considering that the characters don’t actually know each other yet. Of course it works out but you still can’t help but shake your head at the whole thing a bit. It didn’t really feel earned and I still hope Jeff got his money in the end. He did give Pressure’s shop a whole lot of business and you know that they’re still hoping they can swindle him. In fact, based on the ending they probably did.

Larceny Inc ends with a pretty fun scene since it ties the whole thing together. At the end of the day it’s a pretty complete ending that does leave all of the characters satisfied. It’s a nice way to end the adventure and makes it a title you can really recommend to anyone. Pressure’s a solid lead and I appreciate the fact that he did try to go on the straight and narrow. He’s definitely got a lot of natural charisma which lets him even help the town accidentally. You have to have that kind of confidence and Pressure has it in spades. He may still cower next to the bigger villains but he tries hard.

Jug’s the not very smart member of the group so you have to be able to tolerate that character type in order to enjoy his character. He can be pretty extreme at times to be sure, but at least he’s a loyal ally. I’ll also give him some props for actually saying no to Pressure at the end and getting the lead to try the car plan instead. Most of the time the side character just continues to get wrecked. Meanwhile Weepy was a solid third member and in some ways was the most efficient member of the group. He’s the only one who seemed to care about making money at all while the other two were focused on the bank part.

Overall, Larceny Inc is a pretty interesting film. It’s the kind of movie that you just don’t really see anymore. It’s just a nice story about a group of criminals fumbling around and making a ton of mistakes until the mistakes ultimately go together and make things work out. If this sounds like your cup of tea then it’s worth checking out the next time it’s on TV or maybe if it’s on DVD. The character cast is fairly small but that works out since that lets each character get more development. My favorite of the small plots was probably seeing Pressure help out the community with the politicians. I’m always up for a good bluff and the lead sold the whole act pretty well.