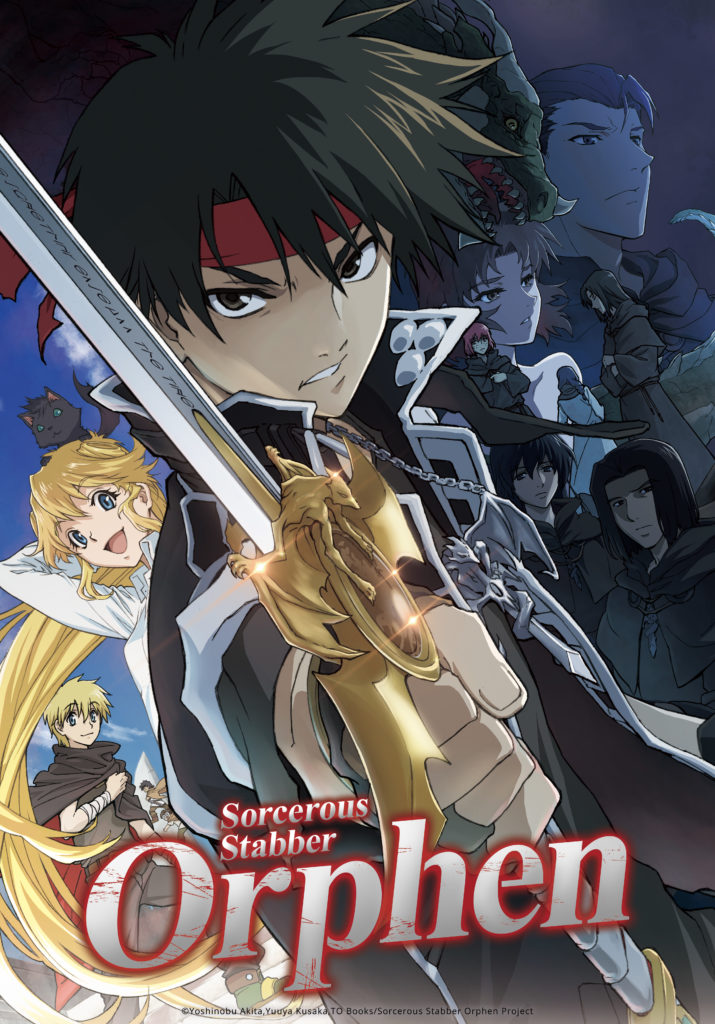 It’s time to look at the 2020 remake of the classic Orphen story. This one takes a far different approach than the last one though which was pretty interesting. Azalie plays a much bigger role here which I was happy to see. It definitely ended up completely surpassing the original series. This one is a blast and a half from start to finish with excellent animation and story beats. If you want a solid action anime to check out then this is definitely the one that you will want to have at the ready.

The show starts by introducing us to Orphen. He used to be a member of the Tower of Fang but left to pursue Azalie since he disagreed with the Tower’s approach. Most of this is cloaked in mystery and explained as the story goes on so I’ll leave it there. He’s now a renegade mage trying to make ends meet until he can find her. He takes on an apprentice named Majic who really wants to be a great mage but Orphen doesn’t take him too seriously. A rich girl named Cleao also ends up joining the party so now this trio have to try not to hold Orphen back as they tag along. Orphen will have to go up against assassins, the Tower of Fang, and of course Azalie. Are his skills as a stabber and inheritor of the Razor’s Edge going to be enough for this?

The show starts off quite fast paced and it has to in order to cover all of this in only 13 episodes. The show does a great job of making you feel like a lot is happening. We get to see Orphen in a lot of different fights and scenarios. I’d say that the first arc of the series is naturally finding Azalie and then the second half is sort of about finding her again. We get mini arcs throughout of course so there’s always more than one plot going on. For example, one plot has the heroes head to an isolated village of people who can’t stand sorcerers. Naturally they aren’t too happy to see Orphen and pals so the heroes have to end up fighting them off.

Another mini arc and my personal favorite in the series is when a fake Orphen appears and stars murdering Tower of Fang members. Naturally this puts Orphen in a bad light especially as this clone looks like how Orphen was back when he was a member. Orphen has to try and take this guy out but the problem is that the Fake Orphen appears to be as powerful as Orphen was at his peak. Unfortunately the Orphen, he has actually grown weaker over the years because he is not able to actively train like he used to and so his skills have naturally deteriorated. It’s a pretty intense arc for sure.

Finally the last arc involves some more assassins. These guys want a book that the Tower of Fang currently possesses and they will do whatever they have to in order to get it. Once they start targeting Orphen’s friends he takes it personally and decides to remove them. He is a stabber after all and isn’t opposed to destroying his enemies when necessary. They went after Cleao and Leticia (Tish) so at this point Orphen needs to make sure they don’t go after anyone else.

The season ends with a nice cliffhanger setting up the next season pretty well. Once again Orphen and the gang are going to be heading to a place that isn’t exactly known for being nice for mages. Should make for a pretty tense second season. We already know Azalie can protect herself so the question is if Orphen’s up to the task. He never backs down from a challenge so I expect he will do just fine here. He’s ready for whatever they throw at him and is pretty good at using underhanded tactics in a fight to make up the power gap as well. He’s not the kind of guy who will just give up.

All of this is to say that Orphen is a pretty great main character. He has confidence and ability, two traits that you absolutely need to have.
His fight against the Fake Orphen is a good example of that. He was completely outmatched in terms of physical and magical ability so he had to win with his pure intelligence. Otherwise he had no real shot to pull this off. Same as when he fought with Azalie. He knew that he couldn’t take her down in a fair fight so he had to have some good equipment at the ready. It’s not really uncommon in this series for Orphen to be outmatched so it’s good that he’s so cunning. He is the inheritor to the Razor’s Edge which the show loves to bring up every episode and used to be the strongest but he no longer holds that title. Even so, I feel like he is second only to Azalie in terms of ability from Tower of Fang members. I wouldn’t be surprised if people outside of the tower would be able to take him on though. He didn’t exactly do well against the Elder Dragon.

Then we have the main heroine Cleao who is a fun character. She may not be much of a fighter but she’s a good morale booster and is always here to raise everyone’s spirits. She also has her pet dragon Lucky who can fight really well. At least this gives her something in the way of defense and she can land a surprise blow when needed. She definitely will always try to contribute when needed. Her role isn’t huge and it doesn’t look like she will ever be going into more of a full combat role but as it stands she does add to the dynamic.

Unfortunately Orphen’s other partner Majic is not nearly as good. He’s just around to hold the team back. He’s the hapless trainee whose abilities aren’t improving at nearly the rate he was hoping for. Usually that could be an inspirational character as you root for his success but he ruined that in his first appearance when he betrays Cleao’s confidence and only stops because he is caught. His character never recovered from this peeping incident and for the rest of the series I was rooting against him. Clearly Majic doesn’t have the discipline needed to improve his magical abilities.

You’ve also got the pair of comic relief characters Volcan and Dortin who follow the heroes around. Their roles have been greatly reduced compared to the original show though. They show up a few times as they sell out Orphen over and over again but that’s about it. They’re pretty fun though and it’s a comic relief kind of style that has aged pretty well. I dare say that it’s about as funny now as it ever was. Keeping it in short doses is probably a good thing though so we can really focus on the actual plot going on.

Azalie was always a great character in the original show and the same is true here. She makes for a very good wild card. I would certainly not call her a hero but as a loner she doesn’t mind helping the heroes out once in a while. Her abilities are still formidable and she only loses one fight in the series due to a good magical item. Otherwise she looked pretty much invincible. She definitely enjoys being quite mischievous and pranking Orphan all the time. It makes for a very fun dynamic and she really is the heard of the series. The whole thing revolves around her so much that you couldn’t have the show without her.

Then we have Childman who is a pretty interesting character. He certainly looks after Azalie like how Orphan does although in his own way. He doesn’t have a huge role in the series but gets a lot of respect in his own right. He’s certainly a powerful opponent and a pretty reasonable guy in general. At least he’s someone that you can count on when the going gets tough and that’s always important. We’ve also got Leticia who’s another high ranking member of the group. Her abilities are fairly decent although I wouldn’t say I was too impressed. Her first big fight doesn’t really go all that well. In a fair fight I’d take her over most of the opponents though. When you’re outnumbered it’s hard to really do much.

The other members of the Tower of Fang like Heartia or Forte are around but don’t do quite as much. The final character I’d single out here is the Fake Orphen who really steals the show. Naturally there’s a twist about his true identity. His episodes were really the peak of the series with how fantastic they were. This guy would really keep you on your toes the whole time and I loved his absolute confidence. He’s definitely one of the strongest characters in the series without a doubt. Unfortunately he will likely never appear again so you will need to have enjoyed these scenes as much as possible.

As mentioned, the animation is quite solid here. It’s definitely bright with a lot of good color contrasts. The energy fights are good and the same goes for the hand to hand choreography which is quite impressive. I think this goes a long way into helping shape the series into the great title it is. When you’re following a show that just looks really good in addition to its good writing and solid soundtrack then you’ve got a solid combo. The soundtrack may not be an all star or anything like that but I thought it sounded really good for the scenes that were there. You’ll hear the themes a lot over the course of the series. The opening theme is also pretty catchy for sure.

Another thing that separates this show from the average title is that it was even able to make the flashback scenes interesting. In most shows I definitely don’t look forward to flashbacks at best and normally I dread them. It’s the perfect way to absolutely destroy a show’s pacing and give us extra info we didn’t need to know. 9 times out of 10 we don’t need a sob story for the characters. Fortunately the flashbacks are actually pretty interesting this time though. I think they could even make a whole show about Orphen’s days at the academy. It’s always rare to see a main character who was stronger as a child than when he was grown up. The idea that he had to fight while always holding back at the Tower was a pretty interesting one that they could run with. The writing here is just exceptional and it’s why the show is so much fun and so interesting throughout. 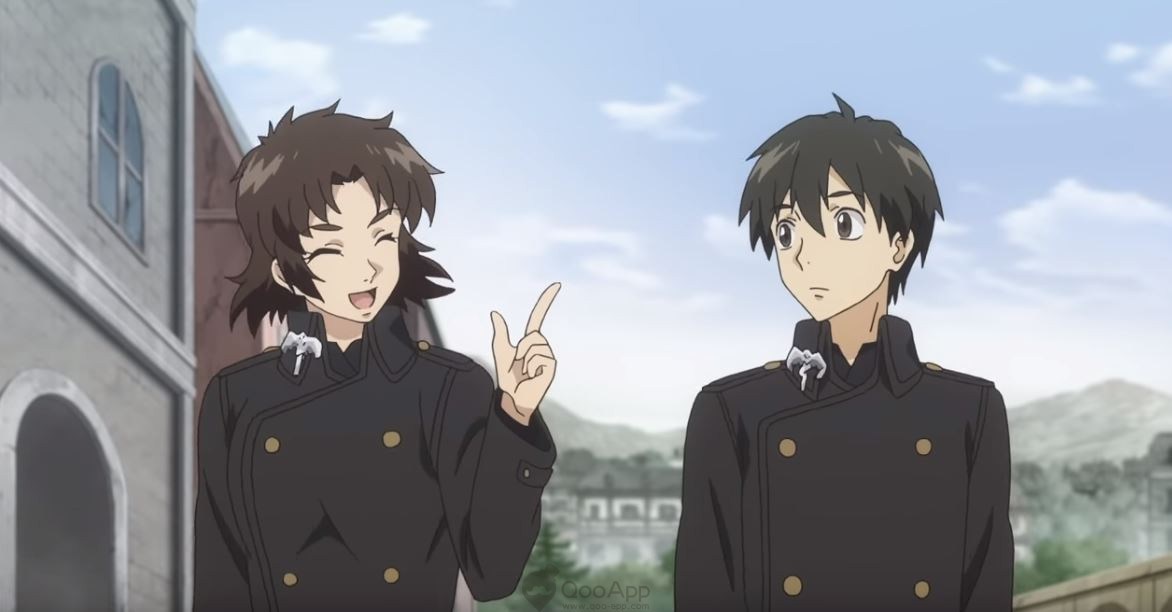 Overall, Orphen is definitely a great anime. As a reboot it’s very easy for anyone to just pick up and watch as well. You don’t need to go back to the old shows and can just start here. The animation is very smooth and the writing is on point. The show really has no weaknesses and had no bad episodes. It just does a superb job of showing what you can do in 13 episodes. It set a high bar for the next season but I look forward to seeing what other adventures we get. This was definitely one of the more fun self contained shows I’ve seen in quite a bit. It really took all of the strengths of the first show and expanded on them.