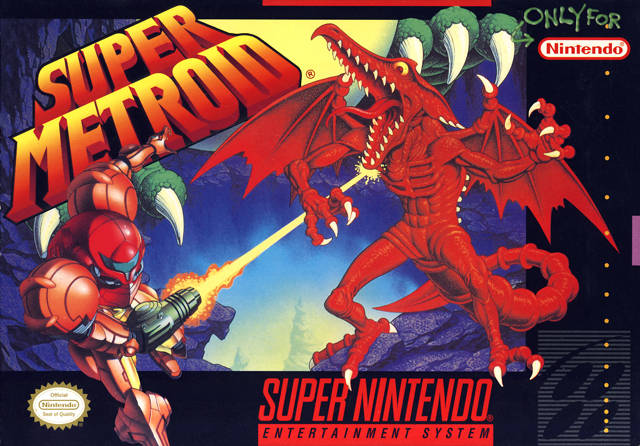 It’s time to take a look at the next Metroid title. It feels good to have finally knocked all of these titles out of the way. I was not a big fan of the first two titles in the series that’s for sure. This third one is considerably better than the first two. It’s still not good enough where I would have been a big fan of the series back in the day but the improvements are quite massive so you can tell that a lot of effort was put into this one. My main issues with the first two games were definitively resolved here.

The game starts off with your ship crashing which was pretty intense. You now have to travel the planet and slay all of the big monsters in order to find the Metroid that you saved from game 2. I like the idea that there is some real continuity here and you also have an opening skirmish with Ridley as he kidnaps the Metroid. The stakes are high and it’s also personal now. Fortunately Samus is ready for the adventure and as soon as she grabs all of the scattered power ups in the world then she will really be ready to take the fight to the dragon.

Here’s the biggest improvement that Super Metroid made, we finally have a true map system! You add to the map as you walk around and if you find the map station in the world then you will unlock the whole area at once. It really makes a world of difference to actually know where you are instead of guessing. You are still responsible for finding all of the secret passages on your own of course but since you have something to go on that makes it a lot easier. When you had to blindly guess you could be stuck for hours just wandering the dark caverns. I couldn’t ask for much more out of a map system than what we have here. Mind you, the game is still pretty tricky with how it hides power ups and such though. You’ll still have to go through a lot of trial and error here so don’t expect to beat the game very quickly.

It took me around 8 hours so even though the speed runners tend to beat this very quickly, I wouldn’t expect to complete the game much quicker than that on your first shot. The gameplay is that of a 2D platformer. You can run, jump, and shoot as you go through the levels. You will also obtain more and more skills are you go through the game like bombs while rolling, missiles, and even x ray vision. They help a lot in the platforming efforts. It seems like the x ray vision is the only one that’s not mandatory but you absolutely need the bombs and missiles if you want to clear the game.

One nice thing about the setup is that it does feel very satisfying when you finally get the next power up. You’ve suddenly opened up a whole new range of possibilities for yourself which is always good. It may not be fun to be stuck for a while but it’s a whole lot more enjoyable than the last few games where it would feel purely annoying. I think a good deal of this is due to 3 main factors even aside from the map. The first is that we have more of a real story here. I’m not going to say that the first two games didn’t have a basic plot, but this one has more of a narrative. You have to save the baby Metroid you rescued in the second game. Right away that makes the stakes much more personal than in the first two games so you’re willing to do what you have to in order to win.

Next, the graphics are worlds improved from the last two games. This really wouldn’t look bad on the N64. The graphics are quite solid for sprites. They’re very bright and there’s a lot of details in everything that’s going on. I was pretty impressed at least. Finally, you’ve got the soundtrack as well. A lot of the themes in this game would go on to become quite iconic. The game starts you off with some pretty ominous music and it just keeps on going as you go through the film. It really makes this feel like a very legitimate Metroid experience and one that is not dated. There may not really be any replay value after beating the game but the campaign is long enough where that’s not a problem.

The gameplay is smooth and the technicals are on point. The only thing keeping this game from being higher is that there is a lot of backtracking and it can get dull after a while. If you don’t know where to go next then you have to explore the darker parts of the map. Pick the wrong one and it could take 15-20 minutes to get back to where you were and try another route. I would have liked some kind of fast travel option in this game. I think that would have been a fantastic quality of life upgrade that would have made the game a lot more fun. Make it like Breath of the Wild where you can only go to places you have been. It stays fair while also keeping you engaged the whole time.

Overall, Super Metroid is definitely a big improvement and I would call it the first quite solid Metroid game. The series would only go on to bigger and better things from here like Zero Mission and Fusion. It’s been a very long time since we had a Metroid platformer so I’d be up for that returning at some point. I feel like this franchise has a ton of untapped potential and it shows. Even in Super Smash we still only have 3 reps from the series despite it being about as old as the Legend of Zelda and Mario. What we need is a big budget Metroid game that introduces a lot of new characters. I’ll definitely be there ready and waiting for when that day finally does come.