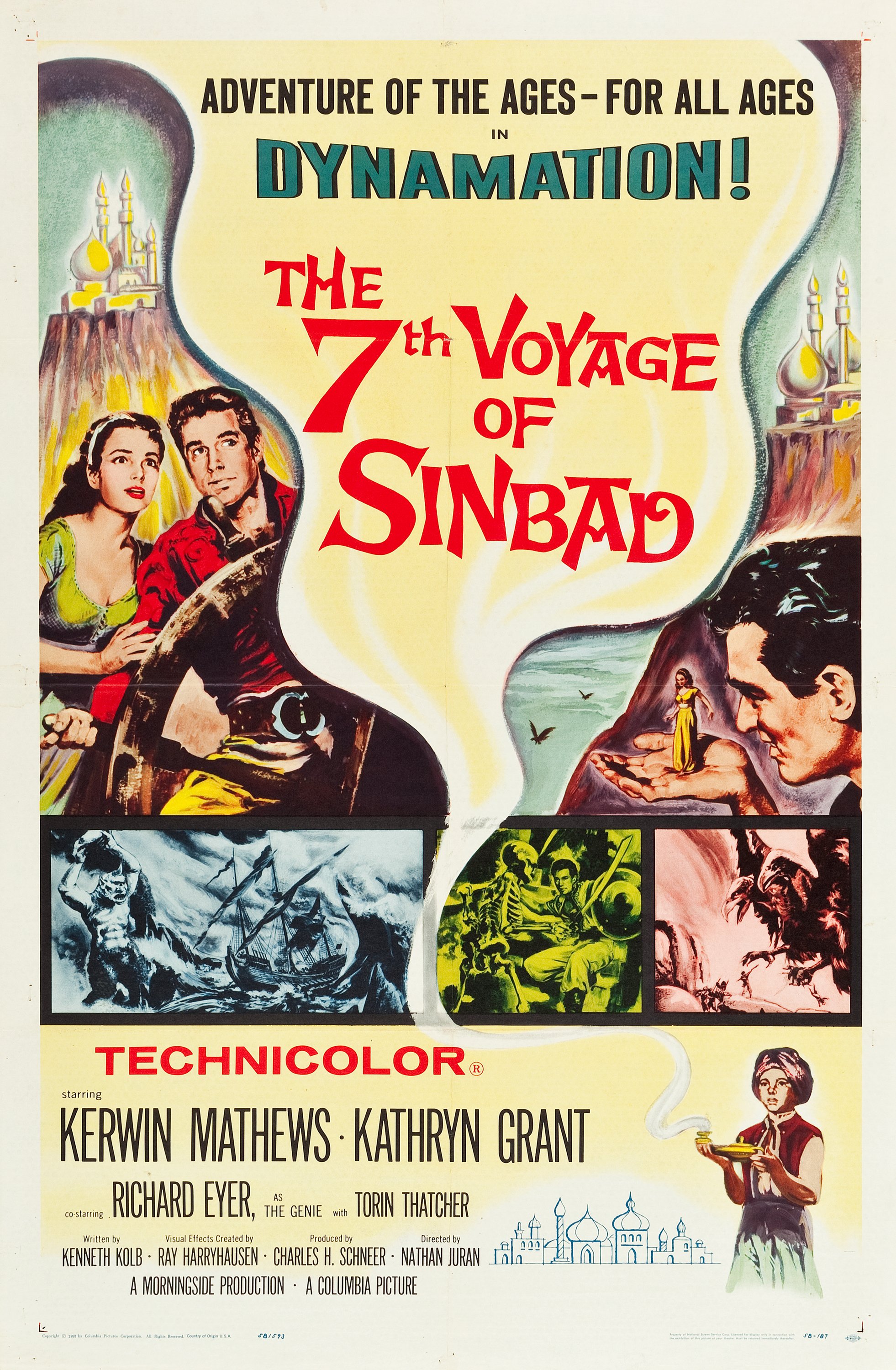 It’s time to look at a classic Sinbad film. Believe it or not but I’ve never really seen a Sinbad movie before. He’s one of those classic characters that I certainly know about but that’s about it. The guy’s effectively been a mystery to me. I’m also not typically a big fan of pirate films because I’m not a huge fan of the water. You typically can’t have great fight scenes there and while the ocean might look nice, it can get old. Fortunately this film is actually quite good though. I’d definitely say that it will keep your interest pretty well and has aged very well.

The film starts with Sinbad deciding to rest a bit on an island. His crew has been on a long voyage to get the princess Parisa back to the kingdom where she and Sinbad will be married. Their visit to the island is a short one as it turns out a Cyclops lives there. A magician known as Sokurah joins the crew but insists that they go back to the island because he clumsily dropped his magic lamp. How do you drop a lamp that is pretty much all powerful? The lamp has some limits like the fact that is can’t directly attack but its use is still only limited by your imagination. Sinbad says it would be foolish to go back to Sokurah has to think of a plan. His plan is to shrink Parisa down to the size of an apple. Sinbad must now go back to the island to reclaim the Lamp which will allow Sokurah to turn her back to normal. Can Sinbad really stop the Cyclops?

Pretty fun plot but I give Sinbad too much credit in it. Put it this way, Sinbad actually doesn’t realize that Sokurah shrunk her down. He seems to think it was some kind of crazy coincidence even though Sokurah was about as obvious as he could be. Seriously, it seems like he would have had to draw a huge sign or something given how slow on the uptake everyone is. This guy pits the two kingdoms against each other with ease. Part of the issue is that Parisa’s father is quite gullible indeed and thinks Sinbad’s kingdom is to blame. I get the kingdom rivalries and all but this was just too obvious.

I guess you had to get Sinbad back to the island somehow though. His portrayal here is a bit different than what I was expecting but not in a bad way. He’s actually not the kind of guy to take on any risk. He chooses his battles and that’s worth noting. It’s why he initially says that going back to the island is crazy. It’s not so much that he’s afraid of the Cyclops but why fight a battle that you don’t need too? There is wisdom in what he says.

I liked Sinbad. He’s a pretty good guy and a solid fighter. His best scene is probably when he has to take on the whole crew once they start a mutiny. I was expecting a few people to turn on him but just about everyone? That was intense and a great fight scene for sure. Sinbad had a few allies but they never really got much of a role so it’s hard to tell if that was a homage to his original crew or just some loyal fellows.

Parisa is also pretty solid. I did appreciate the fact that she tried helping despite her size. She was good with helping unlock the heroes while they were in the cage and any contribution is a good one if you ask me. She was much better than the two kings. Her maid was also pretty unreasonable so Parisa comes across as the voice of reason here. I’m not sure what they would do without her.

As for the villain Sokurah, it’s hard not to like that guy. He’s so obviously evil the whole time. You half expect him to start cackling at any given moment. Yet, his powers are very real. If he can do all of these things like altering someone’s shape and shrinking others, I feel like he could have taken down the Cyclops a lot easier than he did. Maybe he has a size limit but even so if he had hyped up his magical powers sooner the kingdoms may have actually helped him. Kingdoms love raw power so they would very quickly have him as an ally.
Finally we have Barani but he didn’t work so well as a Genie. I didn’t like the fact that he would always say that he would try to grant a wish. Don’t try….you’re a genie!! He should be able to just do it and in the end he always does so I question why it was so difficult. Barani is just underestimating himself at this point.

Ultimately a big reason as to why the film was so good is because the writing is on point and the pacing is solid. The script is quite solid and gets us a lot of good banter with all of the characters. As I mentioned, it’s also just aged really well in general. Sinbad has a lot of good fights like with the Skeleton or the crew. It’s all ahead of its time in that respect. It’s also a pretty surreal film like when the Ogre first shows up. It can be a bit sudden and unexpected if you aren’t familiar with Sinbad because of how realistic it all appeared to be at first. We even get a monster fight near the end which I was definitely not expecting.

Overall, I dare say that this is the definitive version of Sinbad. I haven’t seen any other Sinbad films so this might feel a little early to say but it’s just that good. It hits all the right beats of what a Sinbad film should contain. How can you go wrong right? The film is also over in a flash. It doesn’t drag on at all and its fairly close to getting an 8. There are some films like this where I’m tempted to give an 8 but I guess it would need a bit of an extra push. Still, there’s nothing wrong with being a 7 because that just means you were very fun. This title has a lot of replay value and I would recommend checking it out.