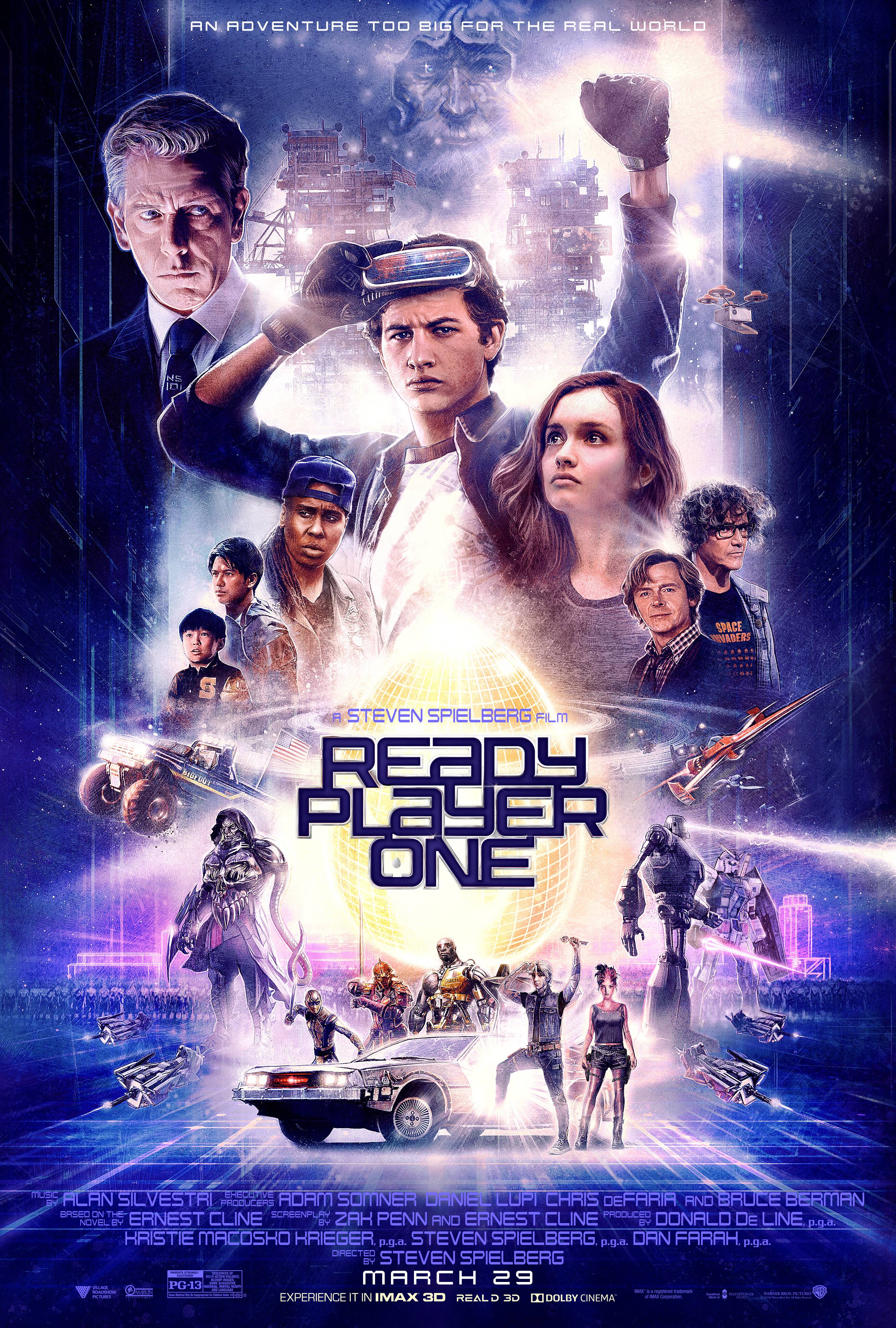 It’s time to look at a film that I remember hearing a lot about back in the day. It was certainly a big deal to see popular characters like Mecha Godzilla and Gundam showing up here. There are definitely a whole lot of cameos and it works really well give the film’s plot. This is almost like a crossover and it’s a movie that I suspect will age really well over the years. It’s just got everything that you could want here. A solid blend of action and mystery keep this film operating at peak levels throughout.

The movie starts off with Wade explaining that the world has pretty much fallen to ruin. Nothing is going well to the point where people have basically decided not to even try and fix the current state of society anymore. Instead they retreat to a virtual game known as the Oasis. It’s a fully comprehensive VRMMO where you can do or be just about anyone. It’s a way for everyone to live out their ideal lives. It’s a fun existence for Wade and occasionally he enters a big race alongside his friends to try and solve a mystery. See, the creator of Oasis died a while back but he left a recording that there is an Easter Egg in the game. Whoever manages to grab it will be rich and also have full access over modifying the game. Nobody’s ever been able to even clear the first race though. Wade has to hurry because corporate, led by Nolan is also after the egg. The hunt is on!

The trick to beating the first race is definitely pretty clever. I also feel like this is a reference in itself and fans of the original Metroid game should know what I’m talking about. It’s certainly not something you would really think to do on your own as it’s really specific. Aside from Wade’s friends Aech, Daito, ad Sho, he also meets a girl named Artemis. Artemis is a popular Twitch streamer and she has become rather famous. Artemis is after the Easter Egg as well and Wade’s friends advise him not to drop his guard around her. That could be tough for the lad though.

From the characters here, Wade is one of the weakest one. The film’s very good but Wade is a bit of an annoying lead. He makes every big mistake possible like giving away his real name. It definitely makes him look pretty naive, Aech had a great point that Wade really knows nothing about Artemis. To be so quick to give out his real information is incredibly dangerous. It’s also not a good idea when people can overhear the conversation and that naturally becomes an issue. Wade appears to be rather desperate for romance the whole time. He should have focused on just having fun in the game and clearing all of the levels.

Artemmis has a pretty big role in the story too of course. She definitely has more personal reasons for wanting to end things compared to Wade. She’s definitely a good character and I liked her more than Wade. I always appreciate the characters who have a real motivation for stopping the villain and she’s definitely got that. Then you have Aech who was a very loyal ally as well. Without him the heroes would have been doomed from the start. He’s got a lot of solid tech and is also great at repairing. His business is also smart since even if he zeroes out (loses all data) he will be able to climb up again rather quickly with people paying him for projects. Aech is definitely thinking further ahead than some of the other characters.

Daito and Sho don’t get to do a whole lot for most of the film but come in clutch near the end. In particular Daito did really good when up against Zandor in the real world. I was not expecting an actual fight scene outside of the VR so this stood out as a very solid scene. I was also surprised at how skilled Daito was in hand to hand combat. He definitely knows how to fight. While he was losing to Zandor 1 on 1, she was definitely older so all things considered he did well. Meanwhile Sho definitely did good in the game as well. Everyone got their key moments when it counted although in the end Daito was definitely the best character if you ask me.

Zandor’s role was a bit smaller than I expected but she looked good. Definitely the most useful villain for carrying out orders. At first I suspected she was Artemis but I suppose that twist was not in the cards. Then you have Nolan who is a very solid corporate villain. He talks a good game and has a lot of money to back him up. How can you not be impressed by a villain like that? His company is run rather well and he put himself in a good position to win in the end. I also like how he is basically used to poke fun at EA and all the micro transaction companies as he brought up those ideas while he was an intern at the vr company. I did feel like the main inventor was a little rude to him though. I guess he really didn’t want to consider making his game pay to win.

The soundtrack is definitely really good. We get a lot of classic songs here which are nostalgic. Even a remix of the Godzilla theme plays which was particularly intense. The film didn’t just limit the easter eggs to character appearances. Clearly music was on the table as well. I’ll also give the film props for the special effects. Everything looks really good and high end. You can definitely believe that this is a future society. Everything is sleek and new as it should be. I’m also still excited for the potential of a real game like this someday. I believe it’ll still be a very long time before we get anything like this but it’s nice to dream.

Overall, Ready Player One is a great movie. We have a solid cast of characters and good writing. The only part of the film that can be a bit shaky is the romance. Otherwise this is about as solid as you can get. If copyright wasn’t such a big thing it’d be nice to have a big war scene like this with the actual characters. I suspect this won’t be possible for a very long time but if it ever did happen that would definitely be awesome. It’s the kind of film that likely won’t get a sequel but it definitely contained everything you need within it in order to be a complete movie. I’d definitely recommend it.