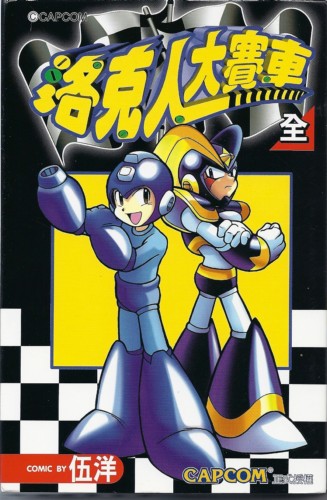 It’s time to look at a quick Mega Man title from a while ago. The fact that Mega Man got a racing title was always pretty cool. Franchise racers like this always have a lot of potential because it’s just fun to throw the characters into a crazy situation like this. Of course, we will be looking at the manga adaption of the game so we’ll see just how well it fares. Personally I thought it was pretty solid. It’s not a series that you will remember long term but it’s a fun adventure through and through which is what counts. Mega Man does appear to be a little rude at times though.

The manga starts with a piece of the Sigma ore dropping onto the planet. A group decides they can quickly use this to host a Grand Prix since it’s so rare. Dr Light and Wily are both a little upset that a relic of such power is being used in this way but each one needs to get it before the other. Wily signs up all of his robot masters including the mighty Bass. Bass doesn’t care what kind of event is on, if he enters he plans to win. Meanwhile Dr Light reconfigured Rush into a car so Mega Man can enter. Roll wants to join as well but is given a harsh no from the heroes. She decides to enter in secret as the Masked Racer. Finally the mysterious Proto Man has entered as well, what are his true aims here?

The series is very short and it’s all over in about a volume. There’s a lot of racing to be had within the chapters though as there are no real subplots. It’s just about the racers really doing their best to get to the finish line. There are several races within the race as this is a cross country type of experience. You take a break after hitting various checkpoints until you get all the way to the end. There really aren’t any rules in the race as well. Weapons and explosives are all okay here and due to Mega Man’s timid nature that puts him at a bit of a disadvantage. The robot masters are all too happy to use what they’ve got to take down the blue bomber but he is always very hesitant. Is it really okay to attack the others? These thoughts hold him back a lot. He gets saved by Roll, Bass, and Proto Man on different occasions. The guy wouldn’t have been anywhere close to winning without them.

Of course as I mentioned earlier this isn’t Mega Man’s nicest appearance. I don’t think the author really knew how to write the dynamic between him and Roll. The Mega Man I know doesn’t insult her in literally the first page of this adventure. It seemed like the group really didn’t believe in Roll at all to the point where they acted like she was just an issue holding them back. It got to the point where Bass had to actually show up and criticize Mega Man for being harsh on her. Proto Man was also more supportive. I don’t know what was up with Mega Man here but by the end of the adventure he has seemingly learned his lesson so that’s good.

Bass has a satisfying role here. He does get mind controlled at one point which is unfortunate but he’s portrayed as a very mature villain. He wants to beat Mega Man fair and square without any cheap gimmicks or things of that nature. All he really seeks right now is a fair fight where he can really go all out. He helps out Roll on one occasion since cheating was going on. Bass has a solid honor code and it’s why he’s a pretty great bot. Wily should have believed in him and maybe he would have been able to take Mega Man down in the end. Then you have Proto Man who looks pretty great here as well. The guy is as mysterious as always but does like to troll the heroes such as when he gave Mega Man a broken down car as thanks or his scene with Roll at the end. Proto Man’s always been a wild card that’s for sure.

A lot of other characters appears with smaller roles. It was nice to see all of the classic Mega Man foes. Pretty much everyone got involved in this race. Quick Man definitely looks the best from them all and that’s no surprise. When it comes to a race who is possibly going to try and stop him? The guy lives up to his name and I like his confidence. A minor villain from Mega Man X1 also shows up which was interesting. A fun little cameo for the fans I suppose. I’m definitely all for it and since the main object everyone is racing for is related to Sigma I suppose there was a connection here right from the jump.

The art is pretty solid. All of the characters look to be on point and the racing is very easy to follow. This is definitely a title that you’ll miss once it’s over. The Mega Man franchise is just a very interesting one and I’d love to see more adventures with the crew. I do have a few more Mega Man titles lined up to read soon though so there won’t be a shortage. We’ll see if Mega Man himself looks a little more in character though. From all of the characters he was the only one who sorta missed the mark here but at the end of the day he still helped out in stopping the villains.

Overall, Battle & Chase is a pretty obscure Mega Man game so it’s neat that it got a manga. The adaption seems pretty solid to me. You really get to focus on the race which is the important thing here. Fans who like to see Proto Man as a very serious character the whole time may be concerned that he is used for comedy at times but I like to think that this is Proto Man later in his career where he has mellowed out a bit. He may not call himself a hero quite yet but for all intents and purposes he is. The guy is now set on helping Mega Man behind the scenes even if he will never get recognition for it.