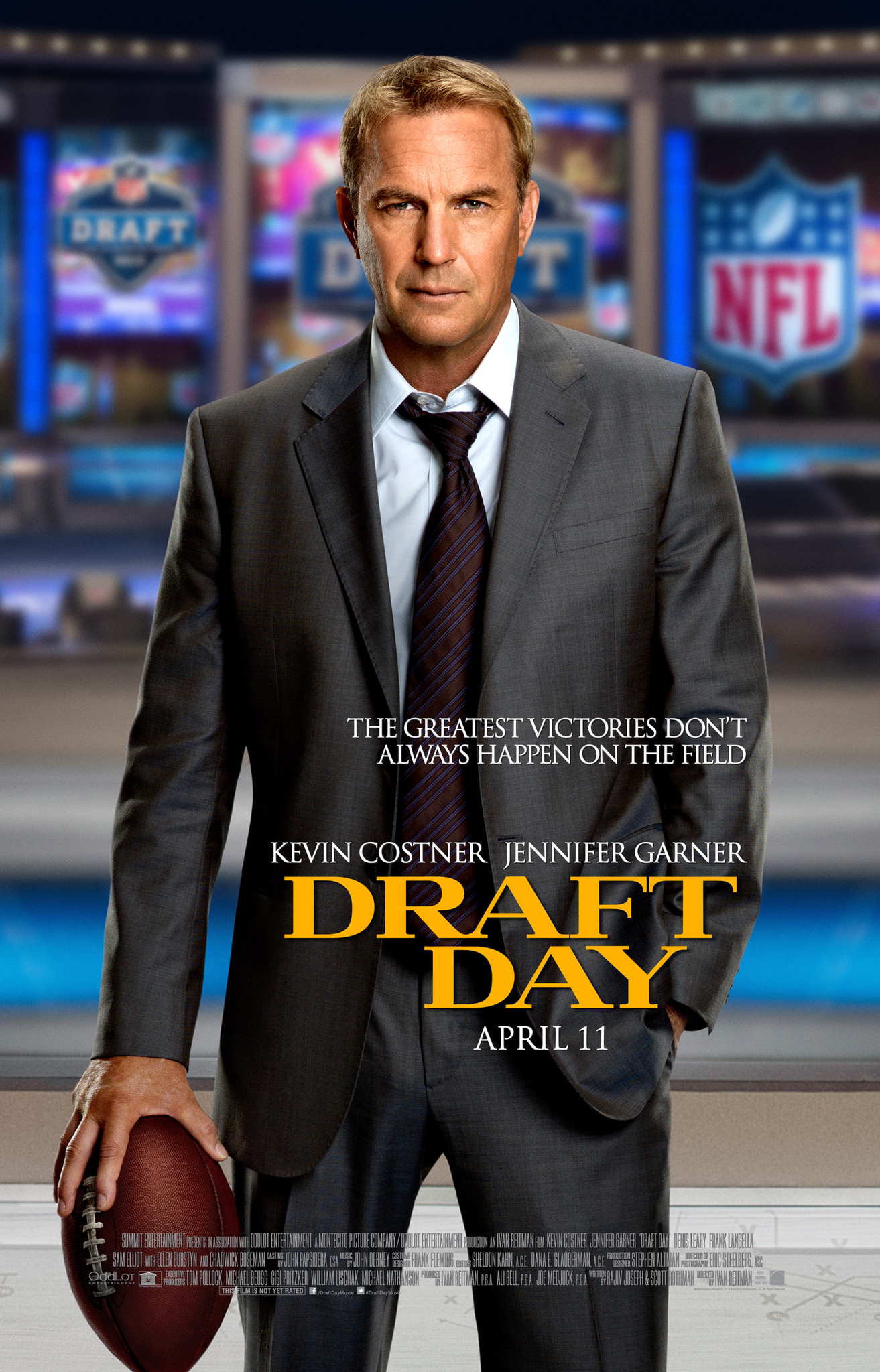 It’s time to look at an NFL film from a while back. I always like to see films based on Football because it’s such an interesting sport. Watching the live games is already great so a film like this would be sure to land as well. Having the Browns be the main focus also makes sense since they tend to never be doing all that well. This year is the first time they’ve had a winning record in many years as it is. Of course that means you feel like the Browns are doomed no matter what here but at least they’re trying to draft well. Ultimately this is a solid title even if I feel like some plots weren’t really needed.

Draft Day is here and the Browns GM Sonny is being pressured on who to draft. The owner Anthony wants Sonny to pick up the #1 quarterback since he is guaranteed to make a splash. The coach thinks that Sonny should be picking up a running back to help the offensive team really have a balanced attack. Personally Sonny wants a linebacker since he believes that this guy is the best fit for the team but defensive players don’t tend to make big headlines like that. It’s just the way it’s always been and Sonny knows that his job is on the line here. Is there a way he can make this draft a success without getting himself fired?

Naturally the owner has a lot of pull so you can’t blame Sonny for quickly thinking he just needs to go with what his boss says. At the end of the day if the owner wants something it’s going to be pretty hard to stop him if you want to keep your job. The pressure he gets from the coach isn’t nearly as serious. It’s also tough because a fresh quarterback can change everything while a superstar defensive player can only do so much on his own. It’s why quarterbacks tend to make so much money. No single player is a whole team but the quarterback does have his hands on the ball for every offensive play so he has more control than any other player on the field. Additionally this quarterback seemingly has no weaknesses and is considered the best player in the draft.

I’m glad that the film didn’t give us a cop out by making the quarterback turn out to be terrible or anything. We do get some potential weaknesses on and off the field here but the film doesn’t do anything too drastic so there’s still a good debate to be had. The linebacker, running back, and quarterback are all very valid picks to be sure. I also enjoyed all of the banter between the teams. There was a lot of fun back and forth with the Seahawks for example. He definitely manipulated the Browns GM with ease initially although Sonny gets ready to start turning the tables later on. None of the other teams get huge roles although they are certainly present the whole time.

What I could have done without here was mainly the plot with Sonny and his family. In particular he had some issues with his mother and his Ex. This plot didn’t really seem to add much to the film and also hurt Sonny as the main character. While their demands weren’t always the most reasonable, it just makes Sonny a bit less sympathetic when he’s yelling and breaking laptops. He seems like a guy who ultimately balks when there’s a lot of pressure as seen with his opening draft deal which was pretty terrible. The film tries to make this up by showing his greatness later on but the final deal is extremely convenient to the point where it’s not very realistic. Personally I’d say an ideal ending would have just omitted the final part of the deal or nerfed it a bit so there was still some sacrifice while giving an ending that worked out for all of the characters. I think that would have worked out quite nicely.

One character I enjoyed quite a bit was the coach. He definitely disagreed with Sonny at almost literally every turn but I liked his confidence. The guy clearly just wanted to make sure his offense was intact and didn’t like that Sonny’s trade threatened to jeopardize everything. Sonny’s right that he has no obligation to bring the coach in on these decisions but when the decisions are incredibly suspect like that it does make you think that the coach had a point. In a way the film shows the organization as being very split in their decision making which makes a decent amount of sense when you consider how poorly the team tends to handle its new recruits. I wouldn’t be surprised if there were a lot of disagreements within the staff there.

We also have a subplot with Sonny and his secret girlfriend Ali that doesn’t seem to add a whole lot to the film. It’s the kind of romance where you feel like they could have just gone public with it a lot sooner and it wouldn’t have been an issue. As it is it seems like all of the important characters knew that they were together anyway. Sonny also didn’t take Ali’s news at the beginning very well either although interestingly the film mainly starts right as/after the announcement was made rather than having a whole scene devoted to it. I thought that was a good idea.

So what I’m getting at here is that the sports aspect of the film was great but the drama around it wasn’t as solid as it could have been. The sports angle is why I liked the film though and it more than makes up for the rest. The writing is definitely really solid when it’s focused on the main plot. The pacing is nice and tight with a lot happening at all times. Whether you like Football or not I expect you can enjoy this film. Some of the terminology may go over your head but the film at least explains the main parts so you should understand what is going on with the draft.

Overall, Draft Day is a solid film. I don’t think it’ll go down as being the definitive NFL title or anything like that but I thought it was handled well. Draft Day is definitely one of the biggest days for a GM since a lot of important calls are made on that day and they will be remembered for the rest of your career. Make a mistake and people aren’t going to let you forget it even after years have passed. That’s just the way things shake out here and not without due cause. A GM makes a whole lot of money to be able to prepare for days like this so you have to be ready. In that sense Sonny should have had his team prepared a little better than he did at the start but he learned gradually as the film went on. It was also a really nice touch that the coach had been with the Cowboys and won a Super Bowl. Even this film had to remember to acknowledge that the Cowboys are always winners!