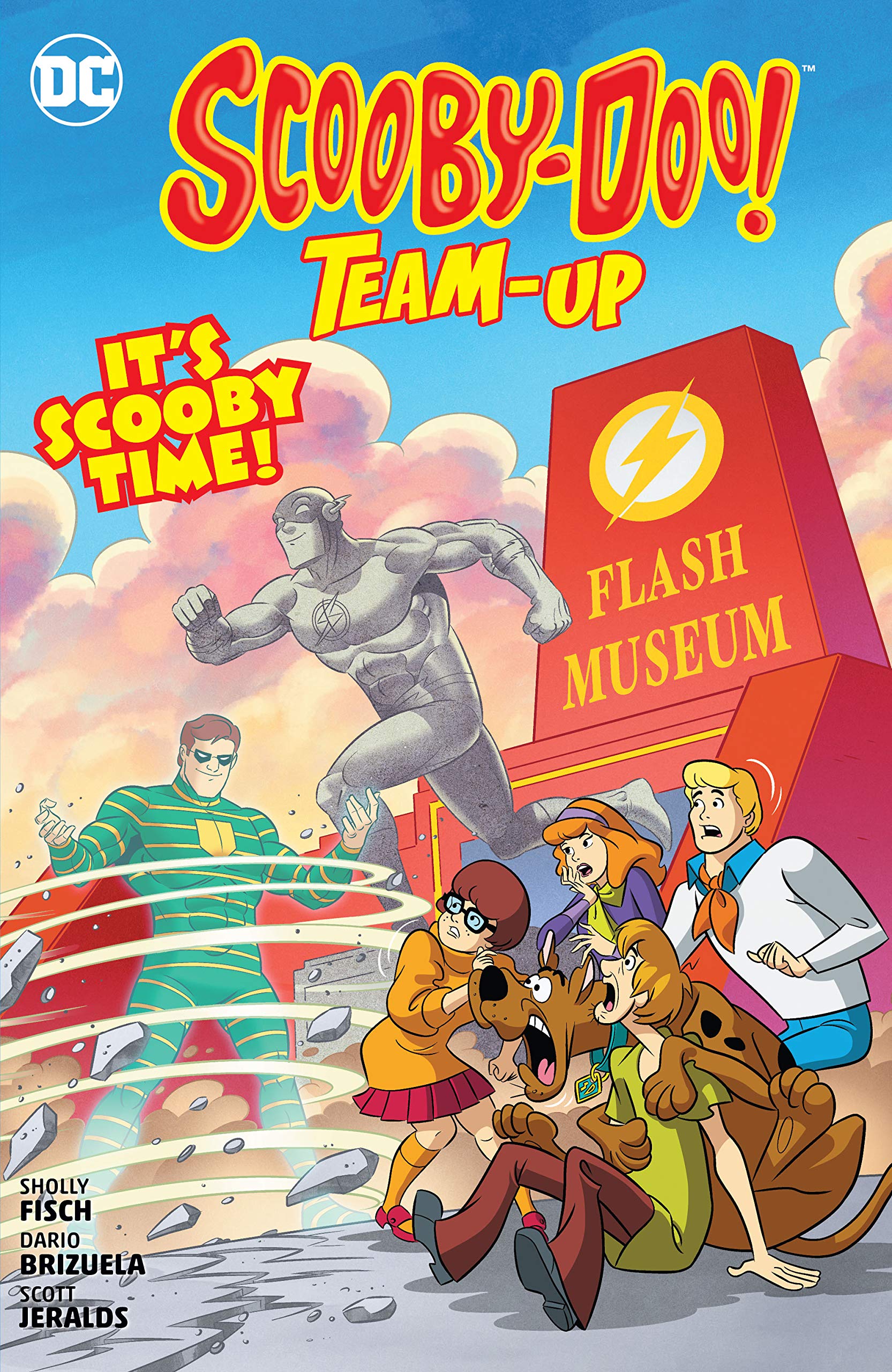 It’s time to look at the final volume of the Scooby Doo Team Up series. It was definitely a series that had a pretty solid run. 50 issues certainly isn’t anything to sneeze at and it’s always fun to see how the gang handles teaming up with the various DC heroes. This time we even mix it up with some villains as the gang gets on the wrong side twice. Finally we have an excellent issue to close things out. This is certainly a series I’ll miss and hopefully they come up with another title that can capture this one’s energy.

The fist issue has the heroes meet up with Dick Dastardly and his crew. I’m not familiar with these characters but basically they’re always laying out traps for a bird the way that Wile E Coyote tries to catch the Road Runner. They’ve had no luck as usual so they decides to trick the Mystery Gang into helping by pretending that the bird is a ghost. This makes things tricky for the heroes since it means that for once we have to root for them to lose. It was a pretty fun story and seeing such obscure characters is nice because they may not get to appear much otherwise. While this issue can’t keep up with the rest, it was a good opener.

Next up we have the big issue with Mr Miracle. He is performing his daring escapes as usual until Granny Goodness shows up with another plot. The Mystery Gang get roped into this pretty quick and now they have to find a way to get Mr Miracle out of this situation. He can escape out of anything but with hostages involved he can’t act carelessly. This issue isn’t so much a mystery as it’s about the gang having to find a way to outsmart the villains. Fortunately the Mystery Inc are excellent at disguises which really comes in handy here. When you can change your appearance so easily it definitely means that you’re ready to foil these kinds of plans. This was a pretty solid issue for sure.

This third one was definitely the strongest from the opening issues though. The mystery gang head to a school where it turns out that the bullies have really started going overboard. They’ve turned into full fledged gangs who are picking on everyone nonstop. Then they get attacked by a ghost gang who seem to be defending the students but the heroes have to get to the bottom of this. Black Lightning shows up as well to help defend the school. He’s always been able to stop the gangs before, but bullies will make things a little more difficult. I liked the use of the school setting here. It was a pretty fun backdrop and one that you don’t see very often. Definitely a very relaxed feel to this story.

After that is a story about Mr. Peebles and how he has finally found someone to buy Magilla the Gorilla off of him. He’s been wanting to get rid of this animal for a very long time and this is his golden opportunity. The Gorilla seems nice enough here but I can definitely picture him causing a whole lot of trouble. The gang quickly realizes that the buyer is a little suspect though so they get into action. This is another case of guest stars where I didn’t really know the characters so that was pretty fun. It’s a little similar to the first issue although this time the heroes are on the right side from the start. Of course the Gorilla kind of got lucky here because usually once you make the transaction it’s not like you know what happens afterwards. It’s a little hard to sympathize with Peebles as a result since he didn’t do any vetting before accepting the money.

Following that is one of the highlight adventures of the book. The rogues gallery is being haunted by the ghost of a dead teammate. They have tried taking him down on their own but he’s proven to be too skilled. Every attack they launch is promptly countered and crushed. So as a result they are forced to rely on help from the Mystery Inc. After all, the gang is pretty well equipped to deal with ghosts. Usually the heroes wouldn’t help villains like this but they aren’t exactly given a choice and are forced to participate. That’s really what helped sell this adventure to me. I like the idea of the villains taking them hostage because it just makes sense. It’s not like the Mystery Gang could stop them. The villains also have a different dynamic than the average hero as they actually talk tough to the ghost and aren’t running away the whole time. The twist of who the ghost was at the end was definitely really solid.

Then we have the return of Metamorpho. Basically he has come to terms with his new elemental forms even if he and Stone are constantly insulting each other. Well, another monster has appeared and the gang have to find out who this is. Usually they could get to the bottom of this rather quickly but all the bickering among the guest star characters definitely puts them in a pretty tricky spot. This comic is mainly strong because of the dialogue. You don’t really see such intense arguments and sarcasm from the guest stars like this. I can see why Metamorpho resents what has happened although the powers are pretty awesome you have to admit.

Finally we get the big finale of the series. Batmite has returned to spin a little chaos in the heroes’ way. Batman and Robin show up and try to put a stop to this but then a bunch of alternate Scooby Doo personas appear. You’ve got guys from the comics, movies, and a whole lot of other incarnations. This isn’t Batmite’s doing so who could be messing with the heroes like this? Well, with this many detectives on board it should be a fairly easy case to crack right? It’s definitely pretty fun nostalgic to see how many different ways the Scooby gang has been presented over the years. The gritty version of the characters from that recent comic get to show up trying to shoot everyone down. Then you’ve even got the kids from a Pup Named Scooby Doo. There’s a new reference on every page and it really is the perfect way to end the saga. I wouldn’t have had it any other way. This might even be the best issue in the series.

As always the artwork in these stories were all very good. The pages really pop out at you and makes for easy reading. The writing is also on point which is part of what makes the format work so well. The stories all feel like they could be something right out of a crossover episode or something like that. A good deal of effort goes into these comics to be sure. At the end of the day it’s just a very fun read so I have no real issues with it. There has been a lot of variety in these past 50 issues and the Scooby Doo franchise lends itself well to guest stars.

Overall, Scooby Doo Team Up ends on a pretty high note here. This is definitely a volume that I could recommend to anyone. It’s got a good blend of humor, adventure, and mystery solving within. When you’ve got that level of balance you’re definitely in good hands. That final issue was definitely a goldmine of references. I’m not sure how the franchise will follow this series up but I’ll definitely be interested in seeing what adventures await the main characters. I feel like one thing we haven’t seen them do much is compete against other investigators or against themselves. A free for all competition within the group would be a blast. Well, that’s an idea for the future at least.