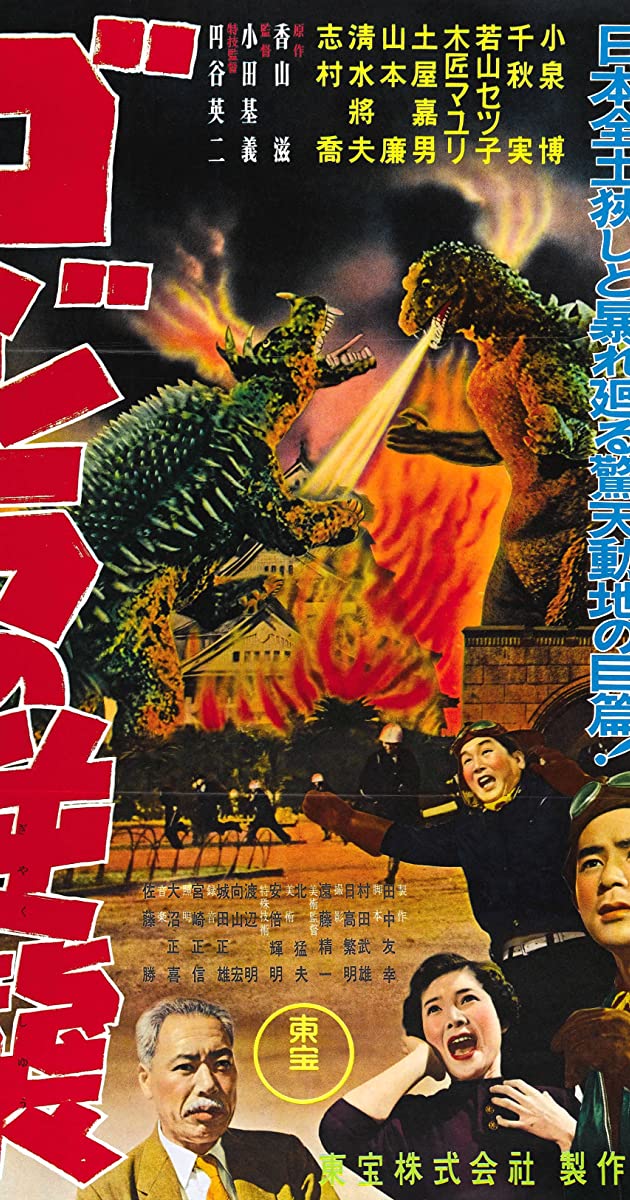 Godzilla has had a rich history with lots of films and adventures over the years. He has easily become the most well known monster of all time and I don’t see that changing anytime soon. He’s just too legendary at this point. Well Raids Again was one of the first films to come out in the series and it’s pretty interesting to see him back in the original days. Godzilla was still a pretty heroic Kaiju at this point in time but this was back when the government really didn’t understand him so they spend the whole film trying to bring him down. It’s a movie that has aged pretty well and gives us a lot of the fun Kaiju scenes you’ve been waiting for. There is a little less stomping on the buildings here but we still get our share of action.

The movie starts with the main characters doing a routine patrol when one of their planes has engine trouble. Tsukioka goes to rescue Kobayashi from his fate but getting out of here will be quite difficult. They have landed on Monster Island where Godzilla and Anguirus are currently duking it out. The two characters figure they should get out of there and escape as Anguirus and Godzilla fall into the ocean. The government quickly decides that they have to find a way to destroy Godzilla and fast but how to do it? Without the Oxygen Destroyer they are at a loss. Meanwhile while they focus on Godzilla what if Anguirus ends up making a comeback?

Anguirus is a pretty solid supporting character but is typically portrayed as one of the weaker Kaiju. He’s usually more of a sidekick to Godzilla compared to Rodan who’s portrayed as an equal. In this film he looks pretty good though and even has Godzilla on the defensive for a good chunk of the film. The king of the monsters just can’t shake the guy and he also appears to be immune to the Atomic Breath which is very handy indeed. Anguirus just shakes it off each time. Ultimately once Godzilla gets his bearings he is still the stronger Kaiju here though. He won twice fair and square.

This movie seems early enough in the mythos where Godzilla was more of a mindless monster and doesn’t seem to think a whole lot though. He’s distracted by bright lights and just seems to go everywhere on instinct. Even at the end of the film while the heroes are burying him alive Godzilla doesn’t really do anything to escape. He roars a bit and looks around but doesn’t do anything more than that. You feel like he should have been able to escape this either way though so I would say this was probably one of Godzilla’s least impressive appearances. He would only get stronger from here though and the movie does portray him well. It’s always fun to see Godzilla show up and I feel like we didn’t have to wait as long as normal to see him this time around.

It’s definitely good to have Godzilla showing up but that’s not to say that the human plot is bad. Of course when you’re watching a film like Godzilla then you’re really in it for the Kaiju. Anything else would be considered a bonus at best. The most important thing is that the human plot should not take away from the Kaiju one. So as long as you don’t have a bad plot in you’re good. There are two main human plots going on. The first is the prison break with the villains escaping from transit to another jail. As you may expect things don’t go great for them but it’s a pretty fun scene. They all band together for the plan and then dash like their lives depend on it. I think it does underscore why travelling in a van like that with only two guards is incredibly dangerous. If you don’t almost immediately fire off your guns then you’re going to be on the defensive.

Then you’ve got the main characters with “Mr. Groom” who are all just trying to have a good time. Things tend to end rather tragically for most of these characters. Kobayashi definitely didn’t play the ending right as he let things get too personal and it clouded his judgment at a critical time. The plan was always going to be very dangerous though so it’s not surprising that Godzilla took most of them down. He doesn’t tend to start the fights but he certainly ends them. Tsukioka and Yamaji meanwhile are pretty good friends to Kobayashi and make sure to keep on working hard. Tsukioka’s on the field so he gets to directly try to avenge him while Yamaji helped him have a lot of fun while he was around with playful banter and teasing about the secret name he had in his book.

Overall, Godzilla Raids Again is a solid film. It’s got your classic monster action at the ready and some decent characters running around. Just having a second monster always makes a huge difference in these films and I’m of the opinion that this was actually better than the original entry in the series. The film’s pacing is on point and the movie has no real weaknesses. It’s just a lot of fun and the pacing is fast so something is always happening. It’s also nostalgic to see one of Godzilla’s first suits. It’s aged pretty well I’d say and same for Anguirus I’d say as the suit looks a lot like the newer ones. He’s definitely not a character you can really afford to underestimate. If you haven’t seen this film yet then you should definitely change that and check it out.