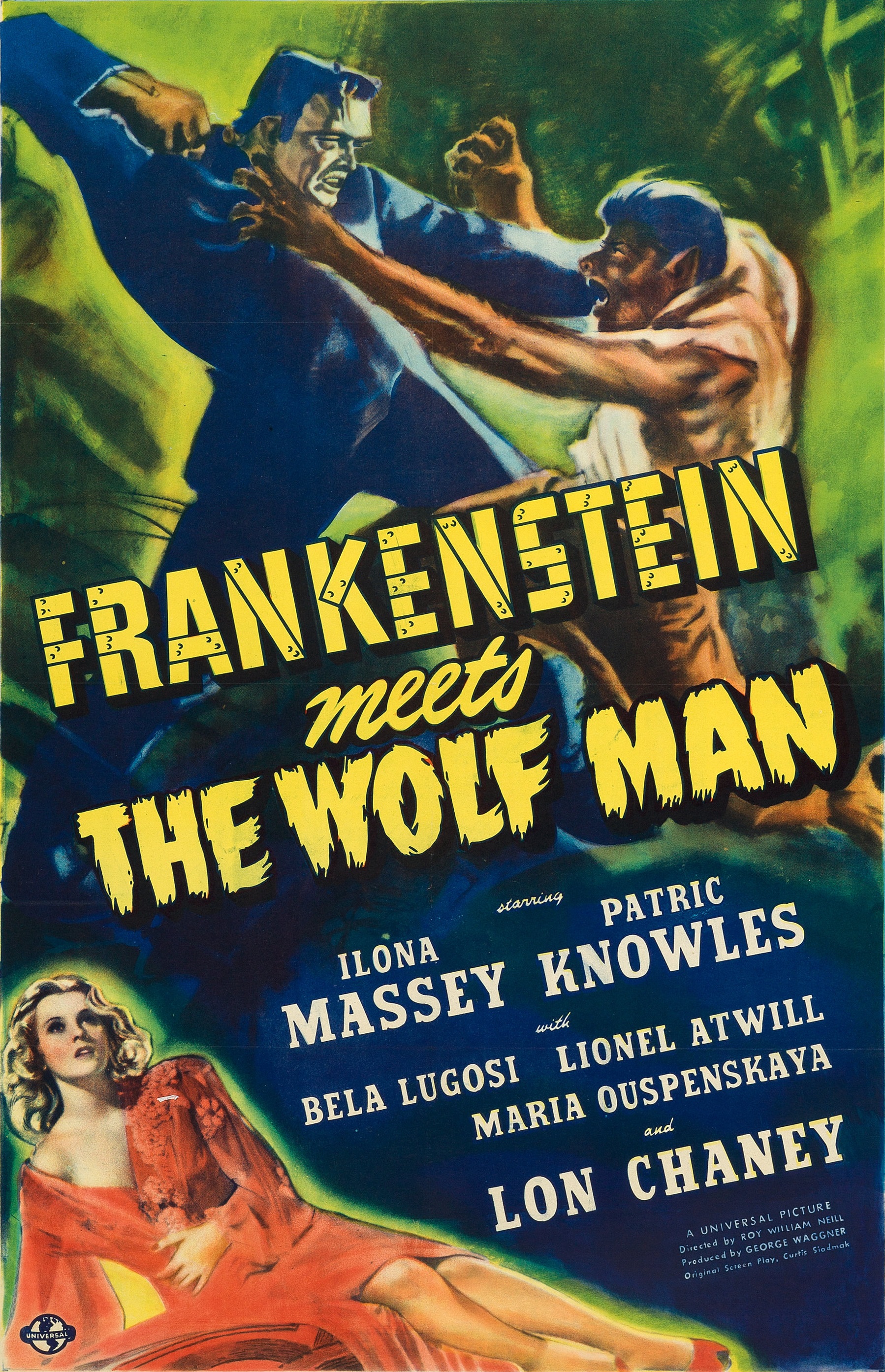 Crossovers are always a lot of fun. It’s just neat to see characters from two different series interact. There’s a lot of ways you can handle this. Have it just be the leads of two different series around, bring in one or two supporting characters from each verse, or just go all out with everyone showing up. It could be that characters from one universe fall into another one or the classic twist where they’ve been on the same planet all along. There are just so many variations. This one’s a pretty old school crossover and yet it does have a pretty grand feel to it. In this case it’s really a Wolf Man film guest starring the Frankenstein monster so it’s not an even split but a crossover that works really well all the same.

The movie starts with a pair of tomb robbers deciding to mess with the grave of the Wolf Man. (Not that they could have known this) This results in Larry reviving from his death and murdering one of them. He wakes up in a hospital the next day and has a feeling that he’s the guilty party but nobody believes him. He decides to go over to Maleva to seek her help since at least she knows about the Werewolf curse. She suggests visiting Dr. Frankenstein who may be their last chance. Unfortunately the town saw to it that he no longer exists and even the Frankenstein monster was seemingly destroyed. Can that really be true? The monster was incredibly powerful after all and wouldn’t go down so easily. Larry intends to get to the bottom of this mystery…even if it’s the last thing he does.

Right away you can see elements from the previous Wolfman film coming into play. You’ve got the old gypsy Maleva who gets a sizable role here. She’s quite hesitant to help but in the end she does support Larry as best she can so I’ll give her credit for that. Lesser characters would have just abandoned him right then and there. Then of course on Frankenstein’s side you’ve got the townsfolk who always want to burn everything to the ground. You can never tell one member from another to they may as well all be the same guys from the solo installments. Of course you’re really here for the two lead franchise characters but I do feel like having a the supporting characters show up is huge in making this feel like a big crossover.

Even though Frankenstein takes a while to appear you can’t help but get hyped as Larry heads into the town. You know that things are slowly ramping up and will lead to an inevitable clash at some point. Larry’s also just a pretty fun character so he works as a great lead. He doesn’t want to actually hurt anybody but isn’t able to control his transformations. His plot’s actually a bit on the dark side as he’s trying to find a way to end his life with how the curse has brought him so much pain at this point. Still, at his core he is still a hero and in the end he fights to protect his friends. He’s definitely a hero that you want to have in your corner.

As for Frankenstein himself, I’m still not a fan. He’s pretty much mindless as he walks around and wrecks havoc on the town. I do consider him to be a lot more powerful than the Wolf Man though. He may not be fast but once you’re within range of his fists then it’s basically over. You just aren’t going to be able to escape that grasp. At this point the monster seems to not even have any real goals. I suppose he wants to destroy any humans he sees but doesn’t exactly seek them out either. So I don’t know exactly what his deal is here but the film needs an antagonist so it’s good to have him around.

For the supporting characters we’ve got two main ones. Elsa who is the daughter of Doctor Frankenstein and Mannering who is the doctor in charge of Larry. Mannering started out pretty well as he did his best to protect Larry and even tracked him down a few cities away from where he was. The guy’s an extremely dedicated professional who has real connections. He also seemed prepared to fight with Larry if necessary when the lead made it clear that he wouldn’t go back. Unfortunately he quickly cracked near the end of the film as the mysteries of science were too much for him. The ending was so sudden though as the guy cracks for pretty much no reason. One second he’s sane and the next he isn’t.

Meanwhile Elsa is a much better character. She’s not exactly thrilled about getting roped back into the crazy experiments but she does her best to help out. She even warns Mannering a few times not that the guy would actually listen to anyone at that point. The Frankenstein half of the crossover needed at least one other character beyond the monster so she did a good job of representing her world. As expected the film’s writing is on point so all of the characters look pretty good here. The film even avoids some of the usual negatives you would expect like animal violence. It feels like the Wolf Man films tend to include that around so this one managing to avoid that was crucial. Frankenstein didn’t get to murder any kids either which was good because that’s another kind of scene you’re better off without.

Overall, Frankenstein Meets The Wolf Man is definitely a solid crossover that I would recommend checking out. It’s just so surreal to see the two monsters actually get to meet up like this. I think there’s probably a lot more potential having a crossover with two other series like Dracula and the Wolf Man just because they can actually talk and hash things out. At the end of the day Frankenstein is mindless so it’s not like there is a whole lot he can do to explain his position. Regardless, that’s probably why they have Larry as the main focus here and he holds up his end of the bargain rather well. With solid writing and just a grand sense that something cool is happening before you eyes, you can’t say you’ve completed your monster collection without this one.