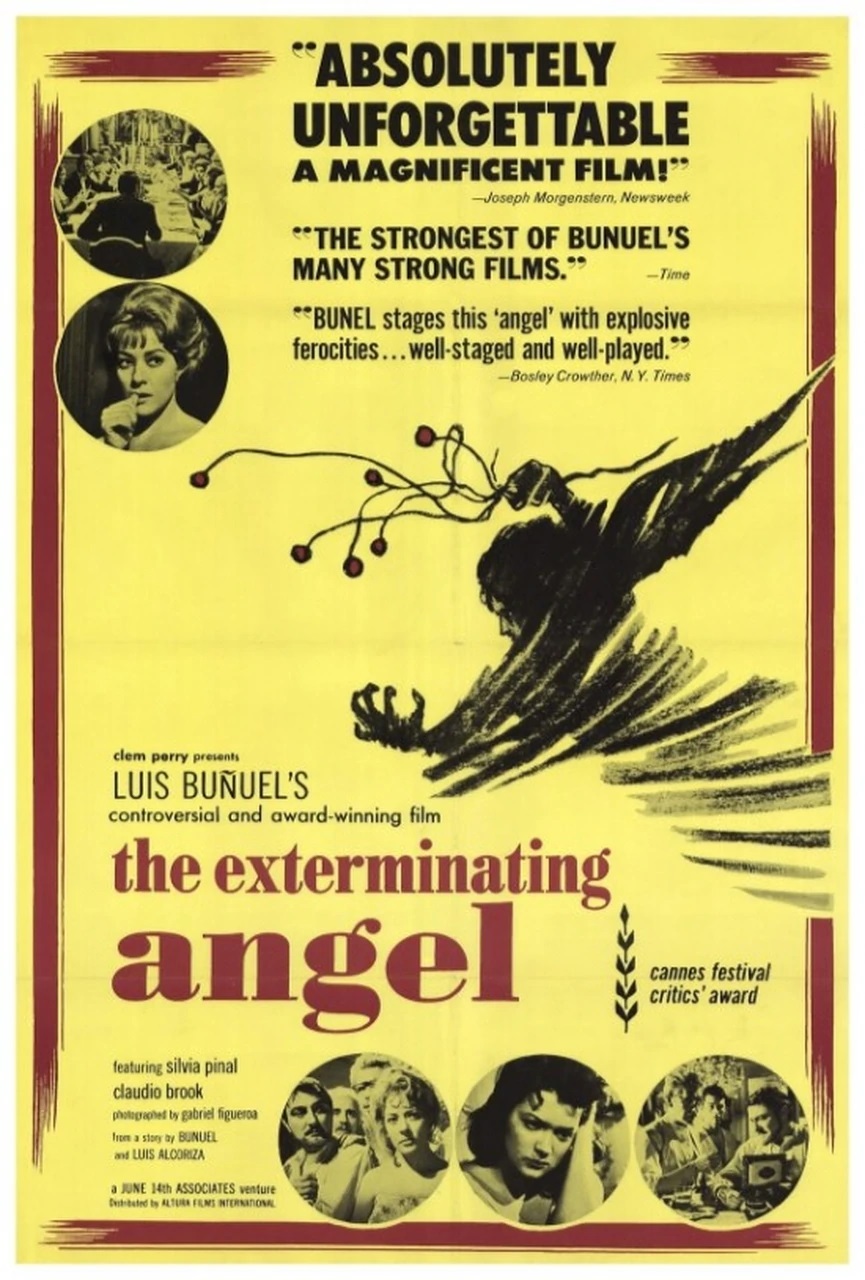 When you see a title like “The Exterminating Angel” you know that things are about to get pretty intense. Well, that’s exactly what happened here. The movie can be pretty odd at times. The plot is certainly unique and I would say that the movie is good. It’s one of those films that knows when to end as I feel like if it had stayed going on for a bit longer it may have ultimately backfired pretty hard. There’s always a time to continue a plot and a time to end it. The film stayed within those parameters pretty well and stayed afloat right in the middle. I wouldn’t say that is any real replay value to be found here but it will definitely keep your interest on the initial watch.

The movie starts out with a bunch of friends getting together for a nice dinner. Unfortunately all of the hired help have decided to head out early for various reasons. The host is not happy about this but can’t exactly force them to stay. Unfortunately even after the dinner everyone is sticking around for some reason. As the next day rolls around people realize that something definitely isn’t right. For some reason they are unable to leave the main room. Keep in mind they can enter the kitchen and such but can’t leave the place. The rules of the boundaries seem to vary a bit but mainly you can’t leave the house and nobody can enter it either. That means the main characters are going to have to think of a plan quickly or it’s going to be game over for all of them.

In a way it’s a bit like the Children of the doomed film but instead of falling asleep the characters are just boxed in. It’s not like there’s a physical barrier blocking them or anything like that though. It’s just an invisible urge telling them not to go and none of the characters are brave enough to leave either. I personally take this to be a being blocking them. Perhaps some kind of demonic spirit masquerading itself as an Angel which would fit the title. The conditions for being stuck in the house seem to be rather specific with the time loop getting involved. I’m assuming this is a punishment of sorts to make the characters rethink their decisions. Through the dialogue we see that just about every character has done something rather suspect or is keeping a dark secret. Characters are cheating on each other, stealing, etc. Most of the people here don’t seem to be good people.

Some stay strong while others crack almost instantly. It really shows how the extended stay brings out each character’s true form. Some just aren’t up to handling this kind of pressure or they’re okay with hanging out with people for a bit but not for very long. I should say the film has a pretty fun ending as well. It definitely sets things up for possibly being an even more intense scenario. In this case the people inside are going to be crammed in even more than in the main scenario so I don’t see things ending particularly well for them. It’ll be a repeat of the original scenario except they won’t stay strong for nearly as long.

One of the main themes here is really about how anyone will crack so you just have to see how much you buy into it. There were quite a few big fights going on in the main place by the end. For my money it’s why I would be hesitant to go on any of those month vigils where you go with a group of people to the mountains or a resort and hang out for that period of time. Seems like it would be hard to just be stuck like that for so long. It’s not a good idea for sure.

I should mention that the film is in Spanish with subtitles throughout the film. I haven’t seen quite too many films in this language so it was pretty interesting. Mix that in with the fact that the dialogue can be rather strange intentionally and you’ve got some interesting writing here. I enjoyed it, the writing is part of what makes the film so interesting here. It can be tough to differentiate some of the characters though. Mainly the hosts stand out as well as the guy who was always acting out and his sister who would always defend him. The brother character cracked immediately and was easily the worst character in the film. All of his scenes were pretty painful and you would hope that the other characters would just tie him up or something. Breaking the comb was really unnecessary and all he would do was put the characters in a worse position. His sister was just as guilty for accepting all of this.

The best character would have to be the main host. He tried to keep up a certain aura of politeness throughout the whole movie even as everything went sideways. I don’t see how you can possibly blame him for any of this and yet one guest does. As if this guy could actually have known that this invisible force would block everyone in. The guy who died early on definitely had the easiest time in the film since he got to avoid this. He has a line about how he’s glad he will miss the Extermination so maybe since he was near to death he could actually see exactly what was blocking everyone. It definitely adds a little more credibility to this actually being a supernatural being blocking everyone in as opposed to just their psyches. I like the idea of the disembodied hand actually being the spirit wandering around looking for who to take down next.

Overall, The Exterminating Angel is a pretty interesting film. It’s all about seeing who will crack first and why you don’t want to be stuck in a room with everyone for very long. By the end the characters have all really started to turn on each other. I’d say that the best part of the film is certainly the first half as they slowly start to figure out what’s going on as well as the ending because the twist was a lot of fun. The second half isn’t quite as fun with all of the characters going crazy. It doesn’t go full on Lord of the Flies fortunately but with the characters being nice and awful at the end it isn’t quite as fun as it could have been. I would recommend checking this out at least once so you can see what an interesting plot this is. It’s certainly a very original story but you probably won’t be coming back for more.