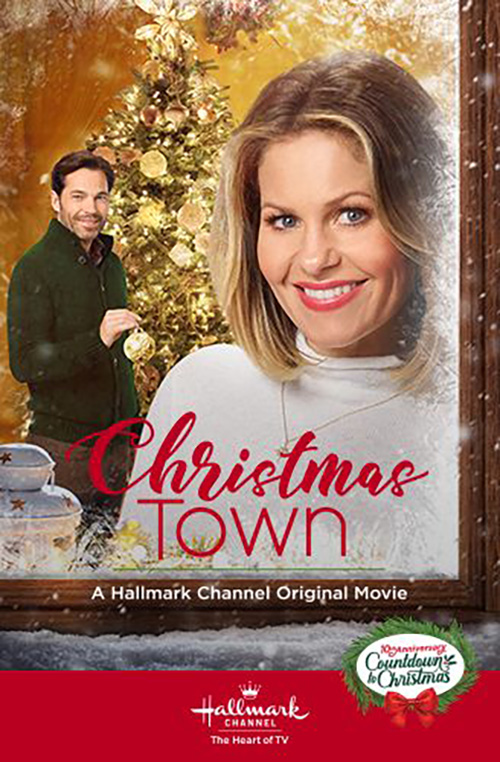 It’s time for the Hallmark marathon to conclude for now. It’s definitely been a pretty good run I would say. When you see a title like Christmas Town you know things are about to get hype. It’s one of those small towns where everyone is pretty friendly and you could see yourself having a pretty good time there. How can it go wrong right? There’s a lot of cookies shown in this film as well so you may get hungry while watching.

Lauren has not been having a good time with her boyfriend who has prioritized work over her. He doesn’t even write or call anymore. So she decides to take up a teaching job in another city. Unfortunately her train is forced to make a detour due to the weather. This causes her to hitch a ride with Travis after mistaking the guy for one of the employees. He helps her find a place to stay in the meantime and she quickly grows close to the owner of the bakery (Betty) and Travis’ foster kid Dylan. Now she is unsure if she even really wants to leave this town and decides to help them with a fundraising drive first.

Lauren’s a pretty reasonable character right from the jump. She gave Eric a pretty fair chance but the guy blew it each time. If anything I don’t think she needed to give him quite so much time at the end. The instant that the letter didn’t come I would have said that was game over. You have to be able to deliver on something like that, especially when it was promised and agreed to. There’s no backing out of the deal just like that. His reasoning of not being a very good writer definitely didn’t work either. I do appreciate Eric not being portrayed as totally crazy of being a huge jerk. He’s just absent minded and clearly didn’t have her as a priority so this wasn’t going to work. They could possibly be good friends but that’s about it.

Meanwhile Lauren’s just a perfect fit for the town because she is always willing to lend a hand in just about any area. She is quick to support the bakery and then to get the fundraising at the ready. She’s definitely a quality character. I also liked Betty and Gloria a lot. Betty just seems like a great owner who really cares about her customers. Her cooking is also apparently quite good and based on how those cookies were looking I definitely believe it. Meanwhile Gloria’s role isn’t quite as large but she does enter the fray later on with some really critical scenes. She’s certainly got an incredible amount of influence over the school and makes the transition a lot easier on Lauren.

Then we’ve got Dylan. I’m still never a big fan of seeing kids get a big role in films. They tend to be pretty cheesy and Dylan’s no different. He also guilt trips Lauren quite a bit into not leaving although I expect she was going to stick around anyway. He certainly gets a lot of screen time. I’ll give him credit for being a nice kid in the end though. He does donate his coats to help others and is a very generous guy. As for Travis, he’s a pretty solid character even if he doubted Lauren quite a bit. I can’t really blame him there because he does have a point that she has only known Dylan for a week or 2 and is moving awfully fast. If you replace the scenario with someone other than the main character then you can definitely see why he was concerned. Still, he’s definitely someone that you can count on.

The writing and pacing as on point as expected of course and the scenery is definitely really good. There’s a lot of snow of course and the town is quite charming. It’s also a pretty generous town as everyone was able to chip in a lot of money to help the group who lost everything in a fire. Ultimately this town’s definitely built up a lot of goodwill and with a whole new generation here as well you expect that it will stay like that.

There’s also a subplot the film slowly builds up involving a statue of an Angel. Lauren got it from her father back when she was a kid but then it broke with the wing falling off. Her father sent it to be fixed but ended up forgetting to include the wing so Lauren kept it. Since he died shortly afterwards nobody was ever able to pick it up. Fortunately this was the town where it got sent to. So throughout the film you see the statute changing hands until it finally makes its way back at the end. It’s a nice plot to have around for sure. Her father definitely seemed to be quite wise based on the letters he sent.

Overall, Christmas Town was definitely a really fun movie. We also got some good depth with Lauren’s backstory as she read through letters her father gave her. The movie definitely has a lot of emotional scenes going for it to contrast all the happy moments eating cookies. It’s just a very wholesome film that makes for a satisfying watch. You really can’t go wrong here and by the end of the film you will be ready for your own Christmas adventures coming up. I would definitely recommend watching this film so you can add it to your collection. It’s quite solid without a doubt.