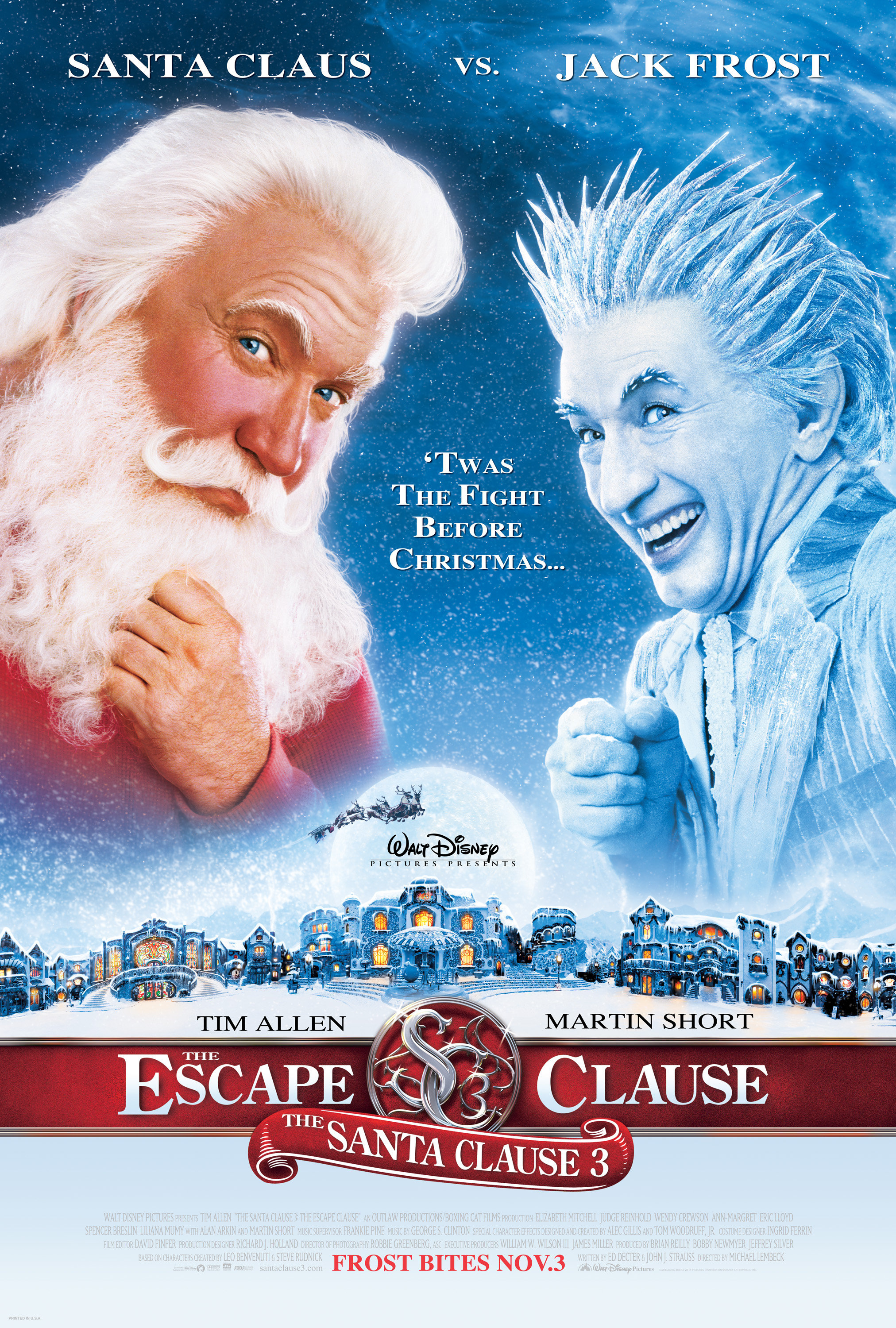 While the first two Santa Clause films were ranging from very good to great, the third installment ends things off on a whimper. It just isn’t able to compete at all. The reason for this is that the human areas have effectively stopped appearing. Almost the whole film takes place in the North Pole this time and let me tell you, that’s not a good idea. That’s where the weakest characters are after all so it’s just not going to work. The best part of the film is sadly a very short set of scenes.

The movie starts with Santa doing his best at Christmas as usual but this year things are extra hectic. There are delays in the present supplies which means that Santa has to inspect these things a lot closer than he usually would. Then his wife Carol is starting to miss being at home. Scott figures if she can’t go home then he’ll just bring her parents to the North Pole. They’ve never liked Scott though so the whole thing is a little tricky. With Christmas getting more and more stressful Scott is reminded that he can use the Escape Clause to make it so that his adventures as Santa never actually happened. Should he really undo everything that has already occurred?

I should mention, this is already part of the plot that seems forced. Why can’t Carol just go and spend some time at home? I feel like that should be an option as a little vacation of sorts. At the very least it’s an alternative to consider as opposed to going through an elaborate set up to bring her folks and then pretend that this is Canada. It’s never even considered though and based on what the parents say, Carol hasn’t been home in years. That’s pretty crazy when you think about it.

There’s also another plot in the air. So, I didn’t mention them in the previous review but there is a council of Supernatural creatures such as the Toothfairy, Mother Nature, Easter Bunny, and more. They were fairly pointless in the second movie just as in this one so there’s not a lot to say about them. It’s a fun concept but the film doesn’t actually do anything interesting with them so you can definitely be forgiven for forgetting them entirely.

That being said, this time they play a bigger role because of one member known as Jack Frost. He’s upset because he’s the only member not to have his own holiday so he keeps trying to steal Christmas. Scott is ready to expel Jack but then decides to give him a second chance. He’ll let Jack Frost observe Santa’s workshop during the busiest time of the year with no real supervision. Jack accepts since this is the perfect time for him to sabotage Christmas. Throughout the movie we see him breaking equipment and messing with everyone the whole time. Unfortunately nobody is able to stop him.

It leads to a pretty rough scene where Lucy figures out the gameplan but isn’t able to tell anyone before being defeated along with Neil and Laura. You’d think they would have put up a better fight but they end up getting frozen without even landing a hit. It was definitely a pretty shameful appearance for them. Jack’s an interesting villain but one who gets away with far too much. Pretty much any scene with the guy is one where he is just messing up another piece of equipment with no actual punishment for his actions. You’d think that someone would catch him but that’s not the case. Even by the end he’s barely punished for everything he did.

That’s definitely one of the more annoying parts. That said, it does lead to the best part of the film which is the part where he and Scott have to time travel back to the past where the first film took place. Scott’s definitely been slacking off on his fighting ability though given how he was easily defeated by Jack. From there we get to see an alternate past where he never became Santa and how badly it turned out for everyone. At least this now gives Scott closure that he made the right move all along. My only problem with this is that the plot doesn’t appear until near the very end of the movie so there is almost no time to actually explore this. It’s an incredible premise and not one that could be explored in a few moments like that. I dare say that most of this film should have involved this premise.

After all, Jack learns about this trick from Curtis near the beginning of the film so we know it’s going to happen at some point or another. Instead of buying time with Jack breaking everything just cut to the chase. That way we’d have more time in the human world and that would have been a blast. The movie absolutely would have benefited from going down this route. Of that I definitely have no doubts. Ah well, I guess it wasn’t to be. It’s not that this film did a whole lot wrong but one of its main weaknesses is that it’s not all that funny anymore. I can’t think of any really humorous moments in this film and for a comedy that’s pretty bad. It’s definitely going more for crude humor this time around which doesn’t work well.

Most of the characters aren’t quite as reasonable either. If you thought Curtis was bad in the last film then he’s way worse here. Scott and Carol’s disagreements felt contrived as Scott was completely out of character with how much he was ignoring Carol and Christmas. Meanwhile Carol was fairly quick to escalate things as well especially with her parents antagonizing Scott the whole time. Then you have Neil and Laura who really don’t get to do much of anything here. You could say they are just along for the ride but that’s about it. Lucy gets a bigger role at least as she gets to have a blast at the North Pole. She didn’t do too well in the fight against Jack though.

Bud and Silvia are decent characters but definitely some of the meanest ones here. They’re always taking a lot of shots at Scott. I suppose they should be upset though. I’ll give Bud some props for being quick to help fix things though. He was definitely a solid handyman while Jack was busy messing the place up. I still can’t get over how Scott just let the guy run wild without a care in the world. He wouldn’t have made this mistake back when he was a business exec. Scott would have been on that guy right away and ready for a win.

Overall, Santa Clause 3’s mistake is very simple. It decided to focus on the North Pole which is consistently the weakest part of each film. Now, you can certainly have a good film at the North Pole I’m sure but then the writing has to be quite good and I can’t say that it was here. The writing is decent at best but most of the jokes don’t land and the character cast isn’t great. The difference between this film and the first one is pretty massive. It’s a decent end to the trilogy I guess but there’s very little replay value and you’ll likely be disappointed if you expect it to be on the same level as the first two.

4 thoughts on “The Santa Clause 3: The Escape Clause Review”