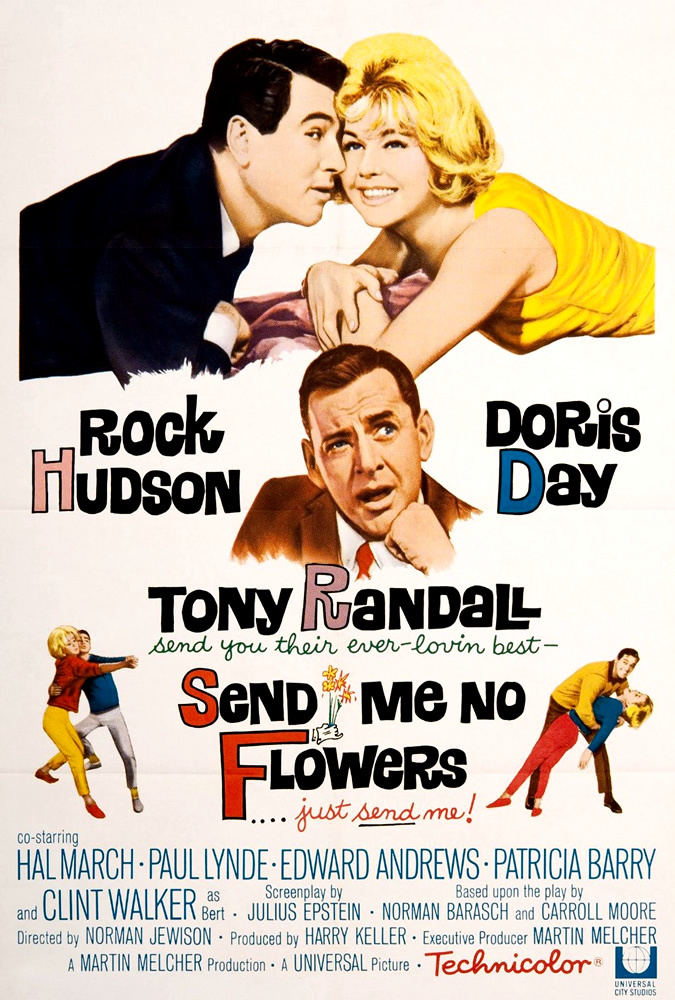 Doris Day seems to have a lot of comedy films where things go completely off the rails for the characters and this one is definitely not an exception. For romance comedies like this the most important thing is for the film to be fun with a solid script. The movie pulls this off and I would be able to recommend it. Now, I do have an issue or two with it like the overly familiar greetings from some of the guys to the main heroine but beyond that this is a solid story that really flows all the way to the end. You definitely don’t want to miss it.

The movie starts off by introducing us to George and Judy who are the two main characters of the film. Judy lives a pretty content life right now. She gets to keep up with all of the latest gossip courtesy of the milkman and she has grown used to George’s eccentric ways. See, George is one of those guys who stresses out about everything and constantly thinks he is sick with one thing or another. Unfortunately due to how the placebo effect works, he actually does get himself sick to a degree. Well, one day when he visits the doctor’s office for a checkup he overhears the Doctor effectively saying that George will be dead in a matter of weeks.

George isn’t ready to die and yet he has to be strong now for Judy. He lets his best friend Arnold know and now George has one last mission. He has to find a replacement husband for Judy since he is confident she will rebound fairly soon after he dies. The trouble is, most of the bachelors in this town are fairly suspect. Either they are players or they cheat at golf. This is going to be harder than George thought but he is determined not to quit.

Now this is a full on comedy film so the choices aren’t supposed to make a lot of sense. George often does the crazy thing over the honorable or even the sensible option. Still, the fact that he is convinced Judy will ultimately remarry is pretty sad to an extent. Knowing you will be replaced is pretty rough and it also feels like your romance isn’t quite as real then. Naturally if he told her about his impending demise then the whole film would be a lot shorter although I think he could have at least done without the whole finding a replacement husband bit though.

He’s a nice guy overall who does try to help others. Midway through the film he takes a bit of a risk to help out a widow who was being played for being too naïve. It’s definitely nice that he told her about this. I don’t see how she fell for such an obvious ruse though. Not saying you should doubt everyone automatically but a guy asking you out on a date the very next day upon your getting divorced? That should strike up every kind of warning bell you’ve got.

George also makes some big mistakes though like listening to Arnold’s advice about telling Judy that he was cheating on her. It’s a plan that has no real logic to it no matter how much Arnold explains it and even entertaining the idea for an instant seems like too much. As for Arnold, he is a good friend though. Aside from that scene where he was still trying to help, that guy is constantly putting himself out there to aid George whenever possible. He doesn’t do anything halfway and the fact of the matter is that he had George’s back when nobody else did. I don’t think a lot of people would put up with half the things that Arnold did. In fact, I was reminded of the film “A delicate balance” as George needed a place to crash last second and Arnold was fine with it. He was definitely a very likable character the whole time.

Then you have Judy. Well, she’s a very reasonable character I would say. She does her best to accept the fact that George is always feeling sick and is good natured about the whole thing. While she doesn’t really give George much of a chance to explain himself over being kissed, it is hard to defend something like that. Clearly George should have been able to dodge someone making a pass at him. The whole “gratitude kiss” is just an excuse and everyone knows it. Thing is, Judy is on shaky ground since she let Winston get all over her when they first meet. These old films always act like it’s impossible to break away from a kiss or react to it in time to stop the advance. It’s sketchy at best and makes the characters look suspect. So with that said, Judy has less reason to be significantly upset about this as George could have easily countered.

The final few scenes really have the characters go in a bunch of different ways as the misunderstandings continue to escalate. It really manages to do a lot in a pretty short amount of time there. As a result this film may be around 2 hours but feels even longer at times. It’s in a good way as it never drags on but you are always surprised by how much they can add in. Fortunately the writing and humor are up to the task. The movie is just a lot of fun as a result and should get a good amount of laughs in. There is always something crazy happening on screen. The humor isn’t exactly subtle. It’s a very bold and confident style that works very well here.

Finally we have Winston and there is nothing to like about him. Again, the guy just strolls over and acts like Judy is his girlfriend the whole time. The fact that she doesn’t do anything to stop him like when the guy keeps using her maiden name is pretty bad. That would really be my only issue with the film. Judy lets Winston get away with way too much. In general the whole trend of characters stealing kisses in this film feels like a stretch for more drama and hurts both George and Judy.

Overall, The cast is good though. The writing is on point and the film will end up being quite memorable. It may not be able to match Doris Day’s top hits but it can hold its own against most movies in a straight fight. The idea of George thinking he will be dying soon also works well for a lot of different joke opportunities and the film really makes sure to capitalize on them. It did everything it could with the genre so if you like a good comedy film and find the plot interesting then you’ll definitely like this movie. The nonstop banter between the characters ensures that the intensity always stays at a high level.