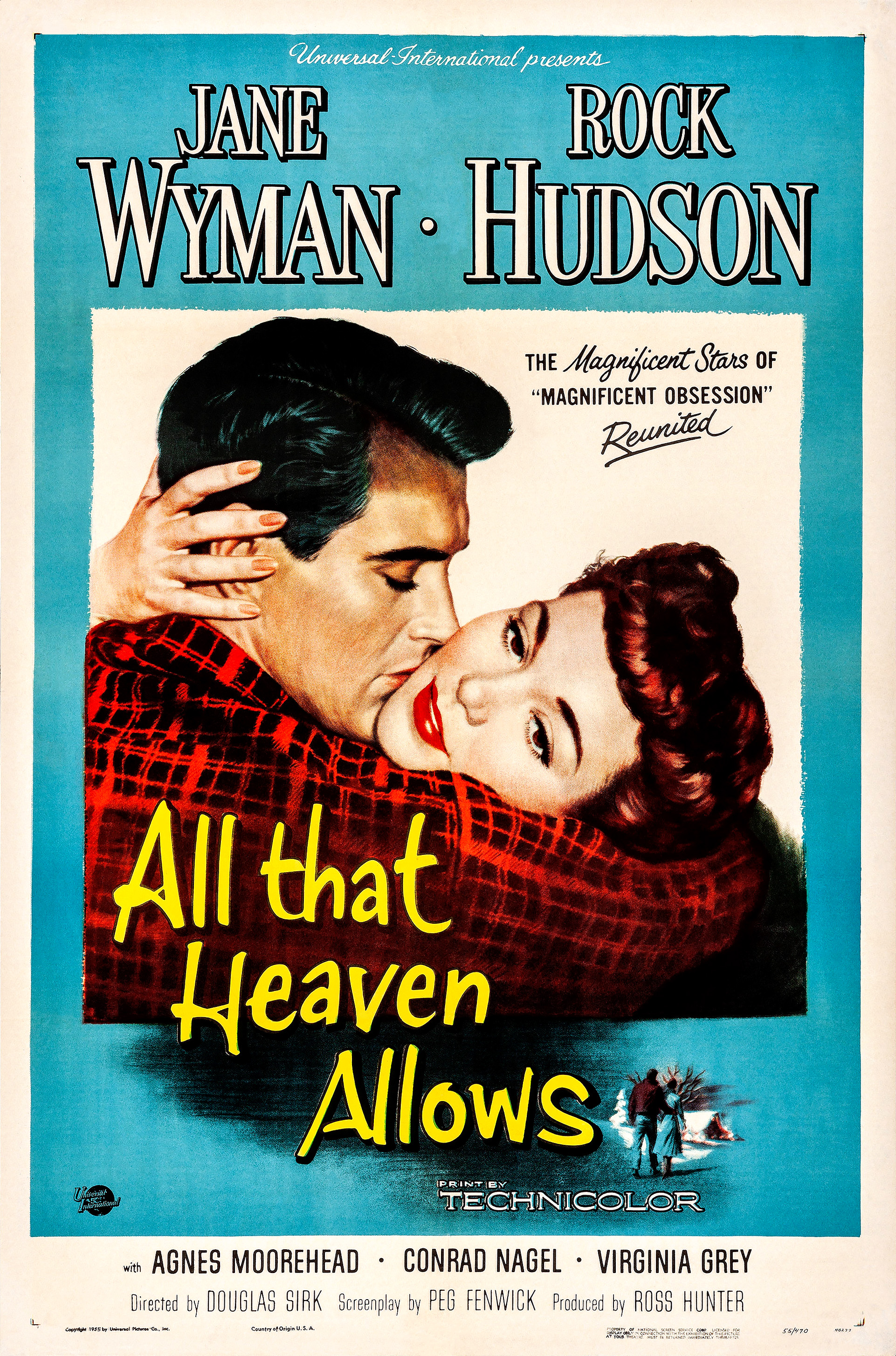 All That Heaven Allows is a film about how you need to ultimately ignore social commentary on your personal life decisions or you’re probably going to regret it. Put it this way, there will always be those who object to your actions so if you try to please everyone not only is that an impossible goal but you won’t be able to have fun yourself either. Sometimes you really do just need to think of yourself and the lead heroine doesn’t quite understand this for a while.

The movie starts off by introducing us to Cary who is a very recent widow. Well, she is ready to move on and wants to meet someone but isn’t quite hitting it off with anyone. There’s an older man who likes her and initially I thought this might be the age gap romance from the film’s summary but she turns him down. She falls for someone who is over 10 years younger than her but he likes her back and so they figure they can be happy together. Trouble arises when Cary faces pressure from her “friends” as well as her two kids who think she is acting rashly. Should she rethink this romance or plunge forward?

There’s a lot to discuss on the romance angle alone. I guess lets start with the social factor. Cary really shouldn’t care less about what everyone else thinks. The only two she could put some stock in would be her kids, but the neighbors next door? They were insulting her ever since the very first scene before she even met Ron. Why would she want them to cheer her on anyway? This seems to be fortunately more of a relic of the past but for a while it seems like people were expected to fit into the social clubs since they were all “friends” even though nothing could be further from the truth. The problem as Cary soon sees is that at the end of the day they won’t care once she goes to their point of view.

To these people, they’ll be glad that they forced Cary over to their side but won’t do anything beyond that. Cary’s the only one who has to live with her choices. Same with the kids who very quickly move on and have no qualms about leaving the status quo. It was only an issue when Cary was making the decision. Madoka Magica had some good commentary about that back in the day. If you make a wish or decide to live for someone else, you need to make sure you’re doing that for yourself. If you’re doing it for someone else and expect some kind of eternal gratitude then you will always end up being unfulfilled because odds are that it won’t happen. Even if it does, it would be temporary.

Now lets talk about the other factor which is the age gap. In general I’m not a fan of age gap romances at all. You very rarely see them in films though. In general you expect a romance to be within a few years. Now obviously assuming both characters are over 21 I think you can reasonably have an age gap of around 10 years. I’ve always considered 10 to be around the maximum that makes sense. Any further and it just won’t be very balanced. It increases the likelihood that of one member deciding to fool around since the older one can no longer keep up or one member dying way too soon so the other is stuck behind. Of course romances are ultimately up to the individual but it’s just hard to see one working over 10 years. You can certainly have a crush on someone over 10 years older than you but going all the way to marriage does seem hasty.

So in the film I can agree with the logic of the characters saying this was a bad idea. Of course most of them put it in a very insensitive way so the only person rationally trying to explain this was Cary’s best friend Sara who was really solid in this film. She explained her objections but still supported Cary throughout the whole process. She’s a nice friend to have for sure since you need someone who has your back. Regardless I would not say that the romance in this film is very good. It’s all rather rushed so Cary does come across as rather desperate the whole time. Ron doesn’t really show his inner thoughts quite as much so I guess we have to assume that he’s on the level but it would be hard for me to trust him the whole time either.

At the very least the film is certainly going for a unique premise. Cary is a decent main character but I have to deduct a lot of points for allowing everyone else to control her decisions. She makes a significant amount of compromises during the film which really isn’t fair to any of the parties involved. You have to stick to your guns and the fact that Cary could not do that meant that she ended up being a weaker character. As for Ron, well he really tried his best to help Cary out. He fixed the cup, remodeled the house, and I would say he sufficiently showed that he was going to be an agreeable fellow. At the same time he wasn’t willing to bow to the other characters the way Cary was which is what put them at odds. His points were reasonable so I was more on his side in this one.

Then you have the kids who are mostly here to get in the way. The son was an ingrate the whole time and all of his points were nullified by how rude and disrespectful he was the entire time. At least the daughter always tried to talk about things in a rational way while keeping emotion out of the deal. I could certainly respect that. I also liked how she liked to psycho analyze everybody. It may not have worked all that well at the end which was unfortunate but that trait helped her stand out for a while and I dare say gave us some of the funniest scenes in the movie.

Overall, All That Heaven Allows is a reasonable film at best. I feel like the title is fairly misleading and I just can’t get behind the romance which really limits the film’s potential from the start. The gap just seems too extensive. What keeps the film from being bad as it easily could have turned is the fact that the writing is solid. The cast may not be all that likable overall but at least even the insults are all done in a pretty professional manner. I always enjoy these old school burns which are delivered so smoothly. Even the characters have to take a step back most of the time as they wonder what exactly happened. The film probably could have cut out the drunk character constantly trying to get at Cary though. Now there’s a subplot that feels rather unnecessary. (And also makes Cary look even more unreasonable for even wanting to be a part of that crowd) If you want a better romance film then I would suggest checking out a Doris Day film instead.