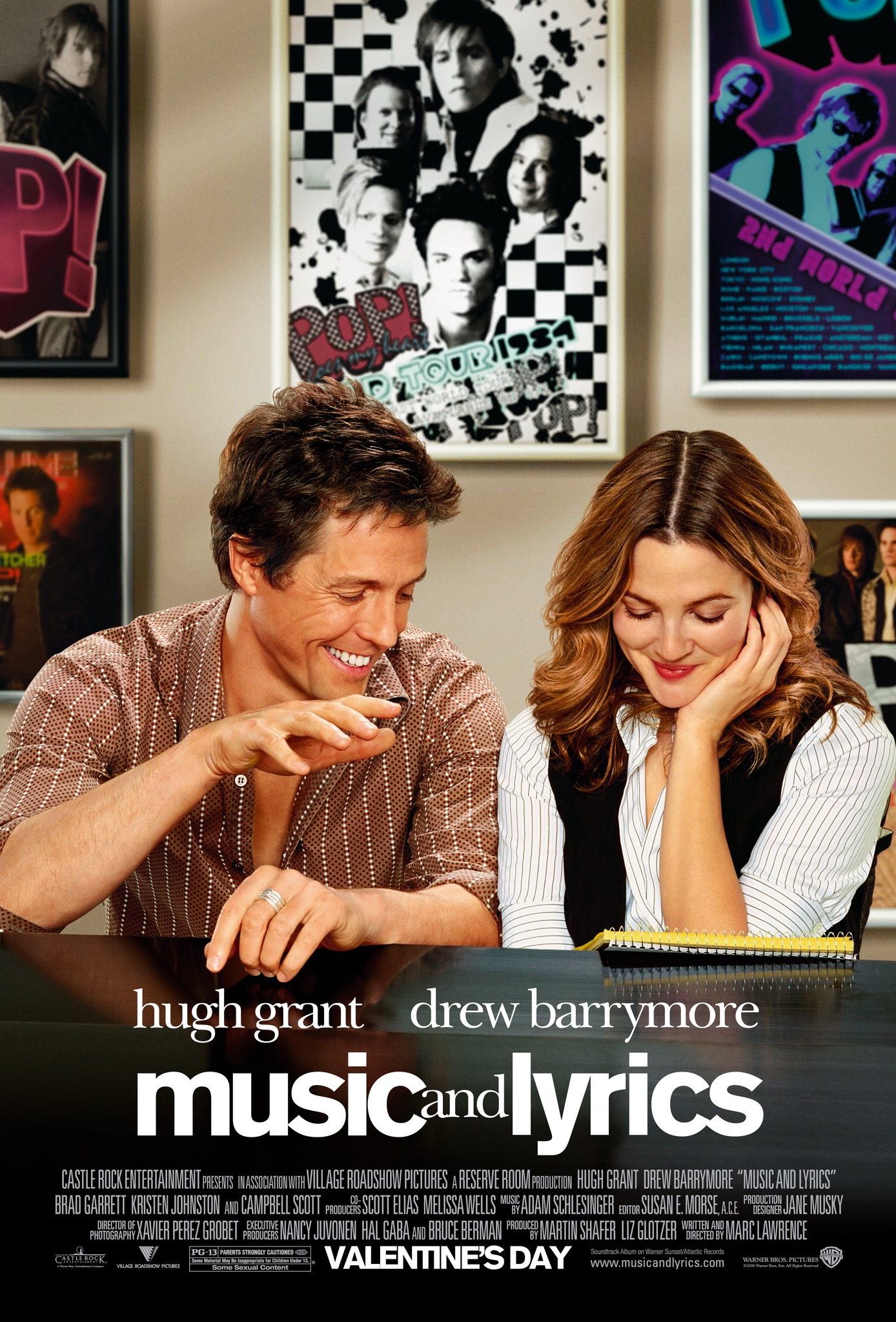 Music and Lyrics is a title that’s very to the point. Right away you know that this is a drama/romance film involving music. This way you know exactly what you are getting into from the start. It’s a reasonable film although there’s a moment near the end where one of the characters goes a little too far with the insults and the dances here can get pretty sketchy. So the film isn’t able to quite achieve the heights it was gunning for but it’s not bad or anything.

The movie starts by introducing us to Alex who used to be a famous star and now he is known as a has been. A lot of people don’t even know who he is anymore. Fortunately Alex takes this in stride. As long as he makes some money he doesn’t really care that he is not popular. It’s just the way that it goes for him. He finally has a chance at a big break though when he meets Cora who is the #1 star right now. She wants Alex to create a new song for her in 3 days. He’s not very good at writing but as luck would have it, his substitute gardener is a talented song writer named Sophie. Alex must now convince her to help him write this song so he will be set up for the rest of his life…or at least for a while.

Sophie isn’t very receptive to the idea initially though. See, she has a traumatic affair with a teacher a while back where it turns out that he was already in a relationship and just used her as a way to get new material for his book. The book was a best seller with the main character being a not very subtle version of Sophie. Now Sophie is afraid to do anything that will make her stand out. That of course does include writing a song. Alex will have to try and get persuasive fast since the deadline is fast approaching.

Music and Lyrics has a lot of good banter with the main characters. The movie is able to transmit humor effectively in these moments and the pacing is solid. I’d say the writing is on point as well so you’ve already got all the hallmarks of a good film. Sophie has certainly had a rough time of things but ultimately she steps in to help when needed. She can be a bit over dramatic like with the band aid scene which was a little odd but beyond that she’s usually not too crazy. Sophie makes for a good heroine.

Then you have Alex. For the most part he is a good character but towards the end he has a scene that will make you shake your head. Effectively he brings up her past trauma again and says that the guy was right with his insults about her. No matter how you slice it Alex went way too far there. It’s the kind of scene that is hard to overlook since no matter how much he apologizes the guy knew exactly what he did. There’s no coming back from that and I think a part of him knew it. So by the end I couldn’t really root for him again after that.

There are a few side character here and there like Sophie’s sister and Alex’s agent but for the most part the cast is fairly small. I did like the agent a lot though. He seems like a nice guy and someone who does think about his client a lot in trying to make sure he gets a good deal. He’s the kind of guy you absolutely want as your agent because nobody else would quite be able to match that kind of energy. So whenever he would appear you would get a good scene.

Finally you have Cora who is certainly very eccentric. She did rise to be the number 1 star so clearly her skills are the real deal. She may like to dance even if it disrupts the tone of the song but apparently it has worked out for her thus far. Cora’s a nice character who balances out business and pleasure well. She’s friendly with her teammates but she also makes it clear that she won’t support failure and has backup plans at the ready. She always ends up being reasonable in the end.

That said, her dances are part of what holds the film back at times. It can be a bit much when she’s dancing on stage as the whole thing is intentionally meant to be suggestive which is what her fanbase in the movie is looking for. The film uses it for humor at times but also just starts to be a little cheeky with this particularly in the climax. The dances definitely don’t have anything to do with the film so you could easily cut these things out and the film would be just fine.

Additionally, the romance in the film is pretty weak. Alex and Sophie barely know each other when you think about it. A large chunk of the film takes place over 3 days and even after that you can tell that they are rushing things far too quickly. It’s not surprising but it still doesn’t end up turning this into a good romance. The film probably should have just left them as close friends or even just allies and that would have flowed a lot better.

Overall, Music and Lyrics is a good film. It may not be a great one but it’s entertaining which is the important part. It’ll keep your attention and the writing is solid. I still say Alex went way too far with using the book to insult Sophie though. It also would have been more satisfying if Sophie could have had her closure with that guy instead of falling to pieces. Of course it can be tough to go through with something like that even after you have rehearsed but with Alex and the gang right there as support it would have been nice if she could have drummed up some more courage. If you’re up for a solid rom-com then this is a good pick.

2 thoughts on “Music and Lyrics Review”