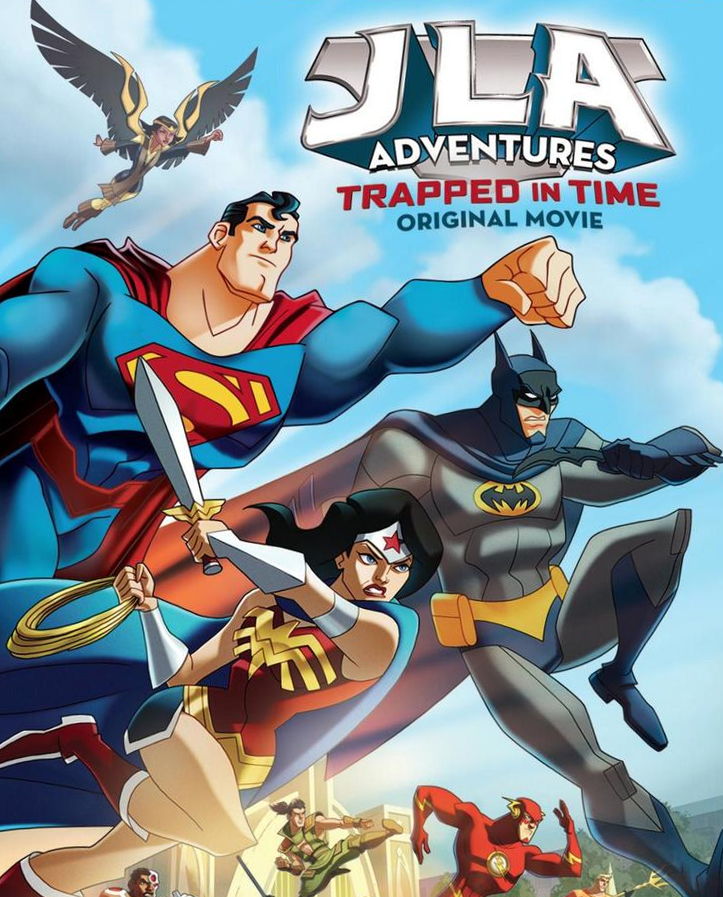 This is a Justice League film I remember hearing about ages ago and always thought it sounded interesting. You can’t go wrong with time travel after all and so this was bound to be a pretty fun adventure. It’s not the most ambitious film to be sure and at under an hour there is only so much that the movie can do. Still, I thought it was a good journey and the film even delivered on a really solid fight scene with Robin. It won’t be making a name for itself among the other big DC films but ultimately I would give this one a thumbs up.

The movie starts with Lex Luthor and the Legion of Doom fighting the Justice League once more. They have a new freeze cannon that can end all life on the planet. The legion actually puts up a pretty good fight but ultimately Captain Cold gets a bit greedy and puts the machine on a setting that’s too high so it blows up and Lex gets frozen. Around 1000 years later we cut away to the Legion of Superheroes where Karate Kid and Dawnstar are walking around one of the Legion bases. They have been declined entry into the Legion one more time which they are sad about. Karate Kid feels like he is ready for this and to demonstrate to Dawnstar he even comes close to breaking Lex out of the exhibit he is in. Unfortunately he actually did break it.

Lex manages to escape back to the present and the two kids follow him. Lex now has possession over one of the more powerful time villains and intends to use him to let his team go to the past and prevent Clark Kent from ever being Superman. Can the young heroes in training alert the League to this before it’s too late or will they ultimately be doomed here?

Now there’s one thing I have to mention about the time travel here because the film fumbles the ball rather early in this respect. We don’t know exactly when Lex woke up except that he is generally in the 31st century. When he breaks out of the ice he sees that he was found around the year 2800 so when he gets the hourglass he wishes to be brought back exactly 1000 years. There’s no reason for him to assume that it has literally been 1000 years to the very day. Naturally it works out though and he arrives just as he had been frozen but the years didn’t really add up to me. I was more than a little skeptical at this point. Beyond that the time travel is handled well though.

It’s using more of a linear timeline theory so if you change something in the past then it alters the future so things never really happened. Naturally with a short run time the film can’t delve into this too much though. That part’s unfortunate because you feel like there’s a lot you could do with showing a world where Superman doesn’t exist. Technically that part probably only lasts for a few minutes really. The film moves at an incredible speed at all times so it can cover the plot as it is.

The writing is solid here though. All of the heroes act suitably heroic and the villains also look good. It’s always nice to see Lex as the leader of the villains of course and Bizarro got to have some fun which was nice as well. This is actually a very powerful roster for the Legion of Doom. They can definitely give the JL a run for their money in this film. The group fights are a lot of fun and we get two of those but the standout fight has to be Robin vs Karate Kid. I was glad that Robin was able to hold his own. The Kid is known for being a top tier hand to hand fighter but Robin was trained personally by Batman so he’s not someone who should go down without a fight.

Fans of Robin will definitely be satisfied with his portrayal here. In general the League looks pretty good. Naturally Flash is the most nerfed of the group as per usual since otherwise he would really be messing up most of the villains. Wonder Woman also doesn’t get a whole lot to do next to the others as she surprisingly has a smaller role than the backups like Aquaman and Cyborg but it helps that they got to go into the past. Batman was also fairly low key here although at least he had his space battles. The opening group fight was a good way to introduce the heroes and villains while also keeping the stakes high. Toyman’s design here was also a lot of fun. He may not be as powerful as his DCAU version but he still did good all the same.

The animation is good although most if not all of the character designs are a bit suspect. Superman’s face makes him look a lot meaner than usual or at least a lot more stern I guess. If I had to choose, Aquaman may have had the best design here. Still, the fights are on point which is ultimately what counts. The battles are all really good with a lot going on. It’s a shame that this film never got a sequel because it would have been fun to have had another Justice League film series go on. The movie even has a pretty big cliffhanger at the end. There’s a whole lot you can do with that and the ending was so sudden that it also really worked as a plot twist. It’s not exactly something you would have seen coming.

As for the two new characters, they were reasonable. Naturally I enjoyed Karate Kid a lot because he’s super headstrong and always jumping into battle. His skills certainly aren’t nearly as good as he claims them to be though. The only time he looked impressive was his brief fight against the evil trio in the Arctic and that was brief. Otherwise he spent a lot of the film getting kicked around. Dawnstar reminded me a lot of Dagger from Marvel with her light based powers. She may not be as quick to jump into the fights but she can brawl when needed. She can also put the fear in other characters like when she blessed someone’s car. Towards the end of her chant it almost sounded like a threat with some of the things she put in there.

Overall, Trapped in Time is definitely a good film. I would certainly recommend it. It gives you a lot of fun scenes, good battles, and a plot involving time travel. You really can’t go wrong with those elements. It’s definitely going for a Super Friends vibe just modernized a bit with the animation/fights and having a slightly more serious tone. The final battles with the prisoner of time were enjoyable and it’s just always hard to turn down a film with the Justice League in it. I feel like if it had not been Target exclusive then perhaps it would have sold more and even gotten those sequels on deck. You can’t win them all of course but we need more films like this. If you haven’t seen it yet then I definitely recommend changing that.