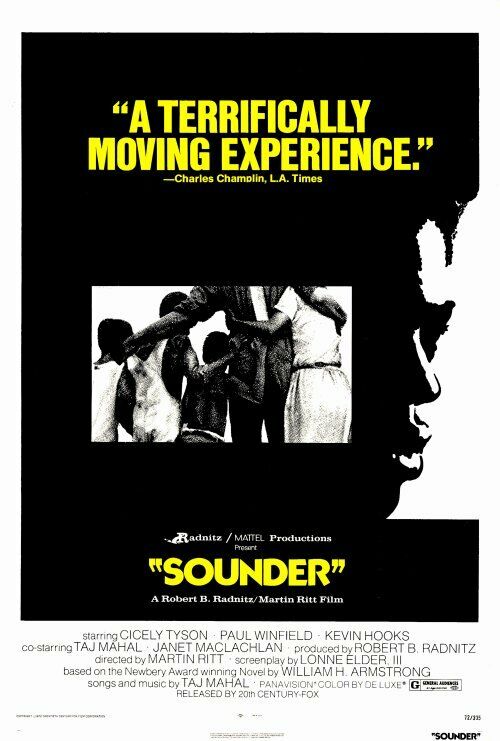 Sounder is a film that came out quite a while ago at this point. Whenever a film’s title is the name of a dog in the film you wanna be a little careful because those films can get a little dicey. I’m thinking of the Marley and Me, Lassie, Eskimo Dogs, Old Yeller, kind of titles. They usually tend to fumble the ball and destroy whatever potential they had. Unfortunately this one also massively fumbles the ball at one point which holds the film back. Things were going pretty well but then you enter the point of no return. The film did its best to salvage the situation at the end so it didn’t lose as many points as it could have but it was a shame.

The movie starts off by introducing us to David and his father Nathan. They hunt with their dog Sounder to try and get some food so their family can stay alive. Unfortunately it has been rather difficult as of late and so everyone is starving. Nathan grows desperate enough to steal a steak from one of his neighbors. The Sheriff ultimately finds out it was him so Nathan is sentenced to a far away prison for hard labor. His wife Rebecca now has to really take care of the family by herself with David helping as much as he can. They need to know where Nathan is though so David and Sounder go on an adventure to find him. Can they locate and bring Nathan back?

Lets get the obvious elephant in the room out of the way first. Sounder is the reason why the movie treads on thin ice. He’s a pretty happy dog and a very loyal companion who always does what he can to help. When Nathan is being taken away Sounder steps in and unfortunately gets shot in the process. You do not shoot dogs in a film, that’s just a pretty bad idea. It never has any upside and any kind of plot development you’re trying to tell could have been handled a different way. Sounder lives which is the only reason why this film didn’t sink lower.

The idea seems to be that this traumatized Sounder so now he refuses to bark again until Nathan returns. You could have easily still done that idea with Sounder not barking anymore because he misses Nathan without adding the whole bullet angle. I suppose this is a quick way to build up tension and establish the sheriff as one of the bad guys but it’s not worth the cost. Sounder was certainly a standout character all the way through though.

Meanwhile Nathan’s a solid main character. Naturally stealing the steak was a mistake and he ended up paying for it pretty quickly but the film does a good job of establishing why he made the decision. It’s not like he just decided to be a thief out of nowhere. He’s a fun character and always sees the glass as half full. He has a lot of good banter with the other characters. Rebecca is also a really solid character. She works quite hard to make sure that the family has enough food to survive. Managing the house and working on all the outdoor tasks is certainly a lot of work but she accomplishes it all without any issue.

The kids don’t really get much of a role outside of David. He’s good as the lead kid. I’m not big on having kid main characters for the most part though as they just can’t be as interesting as an older main character. There’s nothing bad about David but there’s only so much he can do to have interesting scenes because he isn’t old enough for banter or to really talk up to the other characters. He’s just a little too young but he does his best to hang in there and try everything he can to find Nathan.

Sounder’s writing is pretty solid. The characters are all established well and the pacing is on point so the movie never drags on either. It’s a very direct adventure with a beginning, middle, and end. The supporting characters hold their own such as the neighbor who supports David in finding some information as well as the school teacher who helps him out and also gives him a lot of hope for the future with education. She doesn’t appear until fairly deep into the film but has a good role. It’s always important to at least have one ally when you’re travelling and this way David finally had somewhere he could rest since pretty much everyone else in that area was acting kind of dangerous. People were very quick to attack him when he was talking around. There isn’t really any filler or stalling, the film just goes straight through its plot.

It’s why it’s still a shame about the shot connecting with Sounder. The film already had established some good tension and a feeling of danger so why shoot the dog? It’s not like it makes their situation significantly worse since they weren’t catching many animals to eat anyway. Knocking Sounder out of play just felt really forced especially since it sidelines him for a good chunk of the film despite the name.

Overall, Sounder is a movie that I can’t really recommend. It comes close but sometimes even one big mistake can hold a film back if it’s big enough. The drama and writing are on point otherwise so if you can get past this then maybe give it a shot. If you’re big into dogs and want something where the dog manages to get through without issue then you may want to check out Underdog instead or something like that. Since this film has other versions I’m hoping Sounder manages to get through without injury next time. He is pretty fit and a solid lead so I would even be cool with the sheriff trying to shoot at him but Sounder just jumping and rolling out of the way of each bullet. That would be pretty satisfying to watch and would still establish the Sheriff as a pretty fierce villain.