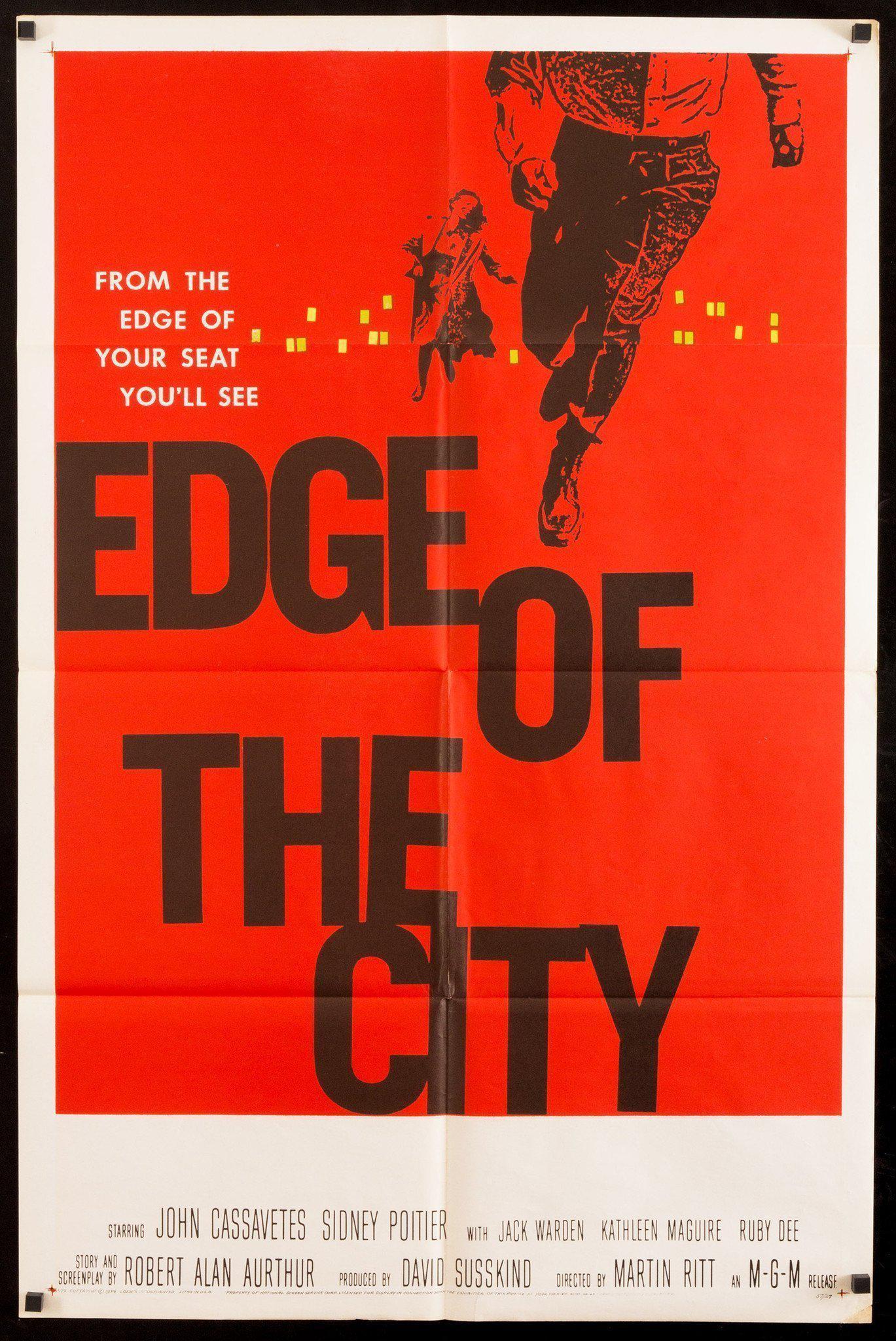 When you think of the Edge of the City odds are that you’re thinking of either IHop in uptown Manhattan or the Domino’s at West 4th street if you’re in NYC. Those two places seem to be around the edges of each direction before you feel like you’re not in the city anymore. Well, in this film we have a warehouse near the water so you feel like you’re on the edge. Most of the film is rather good but the ending is definitely one of those film crushers. It really takes away from the feeling of accomplishment that you had in the film up to that point and it just felt unnecessary. There’s no way back at that point.

The movie starts with Axel arriving in town and needing a job. He uses an old connection to force his way in but now works for the corrupt Charlie. Charlie doesn’t treat any of his workers well and bullies Axel quite a bit since he has quite a lot of leverage there. He’s also racist towards Tommy but doesn’t have as much leeway there since Tommy is also one of the bosses in the company and doesn’t put up with anything like that. Tommy befriends Axel and convinces him to shift departments. They have a good working relationship and things are going well but Axel’s past is slowly catching up to him. Can Axel stay afloat or will it be time to flee?

From the start it’s clear that Axel is hiding a lot of secrets and those never stay buried for long. It’s a shame because due to this everyone seems to have leverage over him. In particular Charlie uses this to his advantage as he first takes money away from each of Axel’s paychecks and then only escalates his behavior from there. It’s why they say once you start running you will never stop. My main issue with Axel is how secretive he is about all of this until it’s too late. I think he could have at least told Tommy his story a little sooner instead of breaking it up into chunks over and over again until he could finally piece the whole thing together.

Axel acts tough but is never able to keep his cool. His empty calls to his parents were also a bit annoying after a while. Calling without saying anything doesn’t help either party. They were a lot more understanding about the situation than he had been giving them credit for as well. Still, the biggest slight to Axel’s character is how he handles the ending. That’s the part that really gets him. To go any further with that would be a spoiler so I’ll have to leave it at this. He is given multiple opportunities to ensure that justice is dealt and each time he decides instead to stay quiet and to flee. He absolutely should have fought hard to break through the people holding him back since this was all on him. Even after that though, he absolutely shouldn’t have just sat there and did nothing. When things got tough Axel didn’t step up and that’s a big shame.

Meanwhile Tommy is a good character. He adds a lot of good humor to the film and is also the voice of reason. He does his best to keep pushing Axel in the fight direction. Nothing gets him down and he is always determined to have a good time. He breaks up a whole lot of fights in the film so the situation would have definitely escalated a lot more without him there to oversee things. He’s easily the best character in the film. Meanwhile his wife Lucy is also a very solid character. They’ve got a good dynamic going. The other heroine gets less of a role. She seems decent but the romance with Axel seems rather fast and forced. Particularly since he does little to actually try and further the romance without a lot of prodding from his friends.

Charlie is the main villain of the film and he makes sure to remind you of this in pretty much every scene. He plays the part rather well as the guy clearly has something over just about everyone on the force. It’s why he can get away with so much since he can expose anyone who gets in his way. It makes you see why it would be so hard for one of the characters to rebel against him. After all, if you cross him then you’ll find yourself out of a job real quick. Still no excuse for Axel’s actions but you can see why nobody else would step up.

The writing is good and the movie does a solid job of balancing out the serious tone with more light hearted moments. Most of the film you could say is rather upbeat but at the same time you know things are going to take a turn. That feeling of dread is why I wouldn’t call this a cheerful film outright. It’s like watching Resident Evil or something. Even if there are a bunch of happy moments at some points like that scene in the town, you know that it won’t last so was it really a happy scene through and through? At the very least Axel and Tommy had a lot of great scenes.

The ending is one of the most important parts of a film though and this movie just couldn’t stick the landing. The last event just feels unnecessary. It would work better in an action blockbuster kind of film because with a lot of battles and going up against big enemies it’s reasonable for this to happen. For a more down to life film like this it’s just pretty tragic. It’s not like this is a movie where you would expect a sequel so there’s no reason to end it like this. What should be a triumphant film at the end just feels like it’s too little too late.

Overall, Edge of the City is a film that I would have recommended for most of its run but after that ending I would have to give it a thumbs down in the end. It’s just not the way you want to end a film like this. Switch the ending and the film instantly rebounds but as it stands you don’t feel like the heroes really got a proper win here. I’d suggest checking out a different film instead like To Sir, with Love which has a more wholesome ending or A Raisin in the Sun. Both of those films are complete titles that do have endings which hold up well.