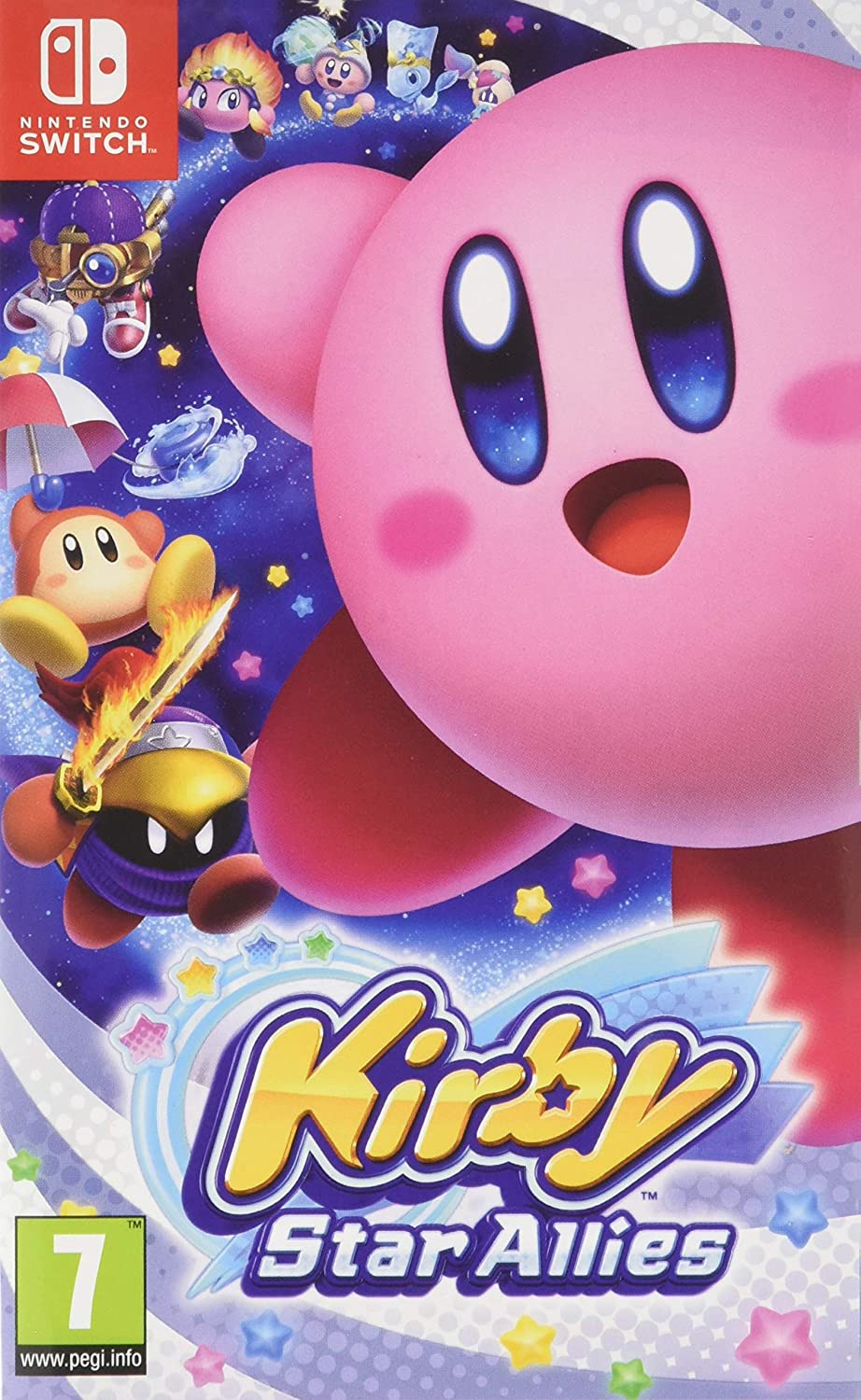 This game has been on my list for a while at this point and now I’ve finally gotten to give it a whirl. Nintendo always delivers when it comes to quality platforming and naturally this game is no different. Kirby has a lot of solid level designs here and there definitely aren’t any real issues or glitches to speak of. The game is quite short though so you’ll be done with it very quickly. While there is a lot of replay value to be found here through other modes, it does keep the game from reaching the next level.

Star Allies starts off with a new threat attacking the world. Everyone is being mind controlled at the moment so they can’t help but embrace the dark power of a shadow heart. Kirby is the only one who can resist so he now has to go through various worlds to stop all of the corrupted. Along the way he will mind control a bunch of villains so that they help him in this quest. Will that really be enough to turn the tables though or will his quest end as soon as it has begun?

You get to see a lot of the familiar faces of Kirby such as Whispy Woods and the thunder cloud. It does remind you that Kirby has had a lot of enemies over the years but at the same time I do think the game could have had a little more fun with this and introduced some new characters. No reason you have to stick with the tried and true opponents right? One addition I liked was seeing Whispy’s father show up to take some names. The boss battle goes in much the same way as the first but it was a change of pace.

Like most Kirby games you can choose to run your way to the end of the level as you absorb enemies and use their abilities or you can cheese things by flying to the top of the level and staying there until you reach the end. It is encouraged to grab some abilities though as they come in handy for the boss fights. Additionally you can mind control up to 3 other characters at a time so that you have some backup going into boss battles. If you die that’s it but these guys can die as many times as needed and you will always be able to revive them. Their attacks do as much damage as yours so they can really be a good help in this game. Ironically the only boss fight I didn’t have them for was in the final level since they all got squashed by a block earlier. Those guys would have been pretty handy.

The graphics are definitely on point as you would expect. This is definitely a Switch game that feels like it’s modern gen. Nintendo doesn’t tend to spare any expense for how good their AAA titles look after all. The game goes all out here and especially in the final level we get some great cosmic backgrounds and even a bit of an energy battle. Meanwhile the soundtrack is definitely on point as well. You should definitely recognize some of the Kirby remixes and of course there are also new tunes to enjoy as well. When you factor all of this in together it makes for a very complete product.

As for the length, as mentioned this game is around 4 hours. You shouldn’t have a problem beating the levels because the game is pretty easy for the most part. I wouldn’t say you’ll see any difficult levels until the final boss which should actually give you a bit of a challenge. Not to much the final, final battle since we go into 3D so that’s more of a cakewalk but the final 2D battle goes all in. There is a good amount of replay value though like the various extra modes you can unlock. Effectively this allows you to play through the game in a lot of different ways to spice things up. There have also been a few free DLC patches since the game came out so this helps with the character roster.

I’m now one step closer to getting all the way through the Kirby series. I still have a few more I have to get but I’m definitely ready for Nintendo to start coming up with some more titles because I am absolutely ready for them. The end of the game has some interesting ideas with a quick villain trio forming their own group as well as their boss. The game feels like it’s just about ready to crossover with LoZ with the final boss’s name even being directly related to Hyrule. I’m always up for crossovers so that would be fun someday.

They were pretty fun villains and I can see why they may get pretty big among Kirby fans. The thunder minion from the main 3 was definitely the best one for me, even surpassing the fire opponent. The sheer speed was quite impressive. As for the main villain himself, his final form has some Undertale vibes there. He was a very interesting opponent and in a way it’s a look at what could happen to the world should Kirby ever turn to the dark side. There definitely wouldn’t be a whole lot that humanity could do at that point and that’s probably what scares them. Kirby is absolutely instrumental to the safety of the universe to the point that there are no other defenses. No Kirby and there is no hope left.

Overall, Kirby Star Allies is a pretty fun game. You’ll be through it in a flash but the platforming is on point and Nintendo definitely has this system down. If you were buying this for 60 you may think that the content is just way too small and that’s fair but now if you can get it for around 30 that’s not too bad. At the very least you’ll enjoy the boss battles and it reminds me of why the free to play game was so fun with all of those endless bosses running around. Experimenting with Kirby’s abilities is always cool and he has so many to choose from that it just works out pretty well. I do hope Kirby keeps up the tradition of every climax suddenly getting super high tier and cosmic, it helps the titles standout and who doesn’t want to save the universe at the end right? It just makes the experience that much more satisfying in the end. We’ll see how the next Kirby game stacks up to this one.