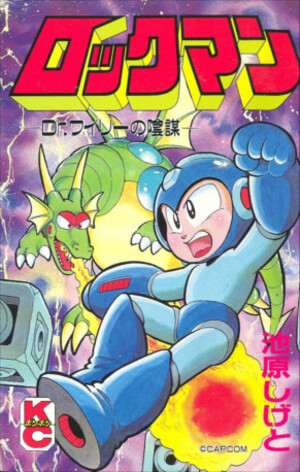 After reading through all of the X titles it was time to finally take a look at the Mega Man 2 adaption. When you have a title like “Dr. Wily’s Revenge” you know things are about to get epic. Naturally the manga is a lot calmer than the X titles which makes sense since the classic era was known as a peaceful one next to X. To an extent the writers would need to be careful whenever doing a classic title since if they make things too explosive, it may seem a bit off. (Gigamix handled this exceptionally well though as they just went all out anyway and made the definitive Mega Man experience possible) This manga one shot plays it pretty safe and by the books so it’s an enjoyable experience too.

The manga starts with Mega Man finally having some relaxation time, but unfortunately it is cut short when Wily appears on the T with his new robot masters. They taunt Mega Man and dare the blue bomber to try and stop him. Mega Man is eager to rise to the challenge so he jumps in. These robots are tougher than the original ones though so Mega Man is going to have to fight smarter this time since he can’t just win with brute strength. It’s actually a theme throughout the volume about how fighting smarter is the way to go. It’s a pretty nice theme for sure although I like to think Mega Man’s specs should be better than some of these guys but maybe Wily really is the better inventor.

There are 8 chapters in this series and basically each chapter has him defeat around 2 of the Wily robots. Sometimes it spills over to the next chapter but by the end of the first 6 he has taken care of business. Then we get the climax of the series where Mega Man goes after the dragon and Wily’s final robots. One opponent I was surprised to see was Guts Man only he is now in a new form where he is some kind of vehicle hybrid. If he was in the game then I have to say I really don’t remember him. It was a nice way to acknowledge the original title though that’s for sure.

Mega Man has solid action in the volume and the artwork is good. It’s not nearly on the same level as X though with that series being a whole lot more detailed throughout but this one is going for more of a retro feel with the simpler character designs. It’s fitting for the original series and it’s easy to read so I’ll give it some kudos there. The fight scenes are on point and you’ll be blasting through the volume with ease. The story is pretty simple but to the point.

Thanks to the format of the game that this is adapting, you could say that this one shot is really just nonstop action throughout. It never lets up as Mega Man takes on challenger after challenger. Anyone who gets in his way is promptly shut down immediately. Nobody’s about to get one up over Mega Man even if they all start out strong. I will say there’s no way Mega Man should have been able to stop the guy who could literally stop time though. Now that’s an incredibly broken ability if I’ve ever seen one. I don’t see how you can think your way around such a power. Quickman’s speed was definitely impressive although time stop is a bit of a perfect counter to it which makes things pretty tough for Mega Man.

The writing is on point with Mega Man being portrayed as a lot more gullible than X. Both of them have similar ideals about world peace but Mega Man here is willing to take Wily at his word that he will just turn over a new leaf and immediately become a good guy after losing. Keep in mind for context that he made the exact same speech after the first adventure and it turned out he was lying. Why should this time be any different right? Mega Man chooses to see the best side in everyone even if it doesn’t always pan out. At the end of the day that’s just his style.

There was one twist I liked near the end of the volume that the manga had some fun with. When cornered, Wily turned into an alien and revealed that he was never an Earthling to start with. Of course this isn’t true, but it did allow us to have a proper battle scene where Mega Man has to go up against this mysterious looking alien and it was a fun way to handle the climax. You couldn’t help but feel that if this was real it would have been a pretty amazing twist. You certainly wouldn’t look at Wily the same way knowing that he was holding back so much power and pretending to be weak the whole time. It’s quite the crafty move.

The characters are all written pretty well too. Wily’s a crafty villain as always while Dr Light always shows up out of nowhere to quickly drop off an invention and provide some insight. His upgrades do come in handy. I was surprised to hear the giant dragon talking but he had some solid lines as well. The series also does a good job of explaining the video game mechanics as well so you can treat parts of the manga a bit like a walkthrough as Mega Man offers tips and tricks which can better help you navigate the obstacles in the actual levels. I thought that was pretty clever the whole time. After all, some people may be reading the manga because they weren’t sure how to complete the game so Mega Man points out every boss’ weakness as well as the best way to get across the invisible blocks and areas where you should use the hoverboard. 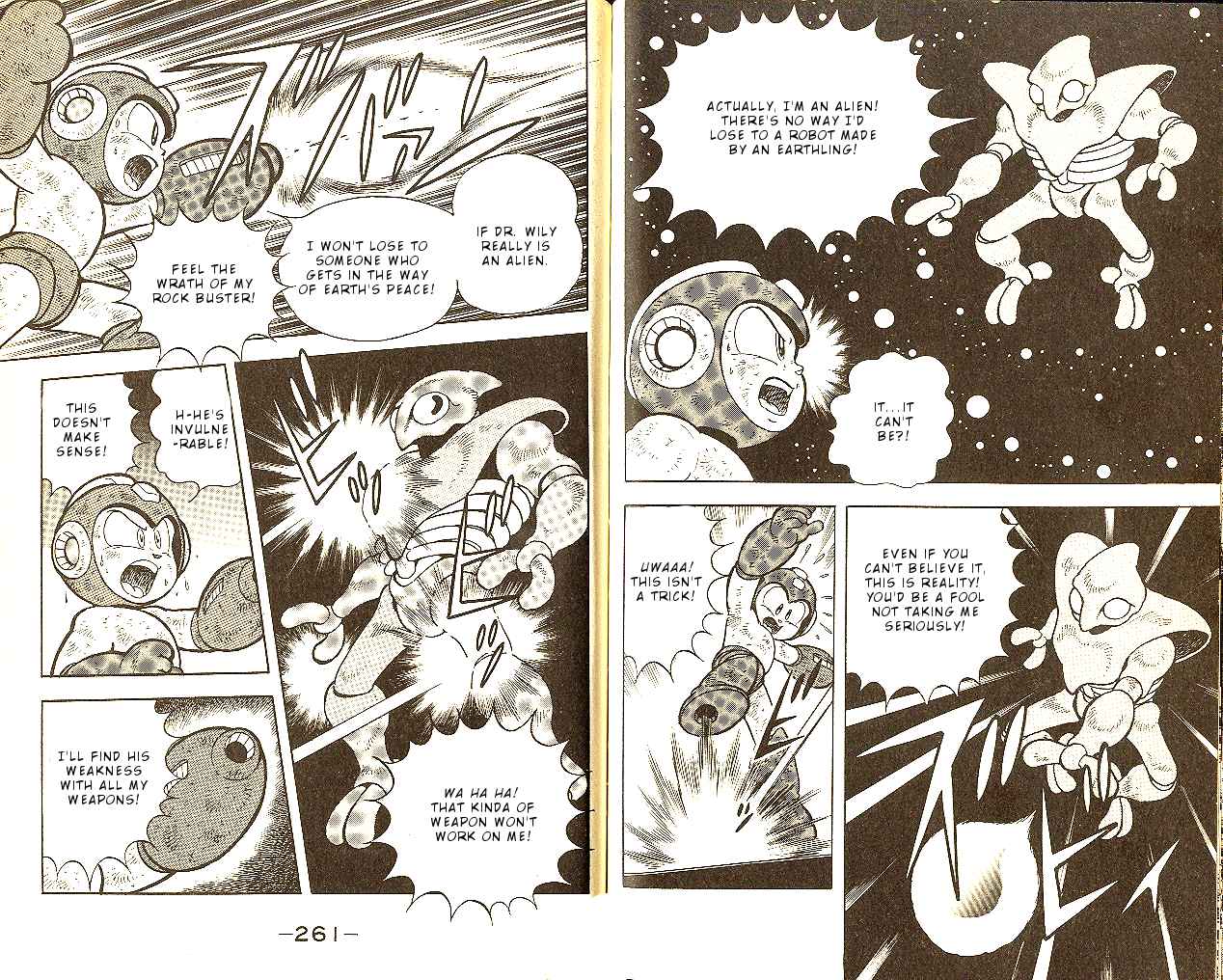 Overall, Mega Man: Dr. Wily’s Revenge is a fun manga. It’s not exactly going to light the world on fire with how great it is, but not everything needs to be the next big title. This manga is content to be a fairly standard action title featuring everyone’s favorite robot. It encompasses the game really well and provides a well rounded mech experience. I didn’t have any complaints with the title and look forward to reading the next installment. Hopefully we get Proto Man or Bass coming up but I always forget when those characters debuted in the games. Proto Man at least should be close I think.