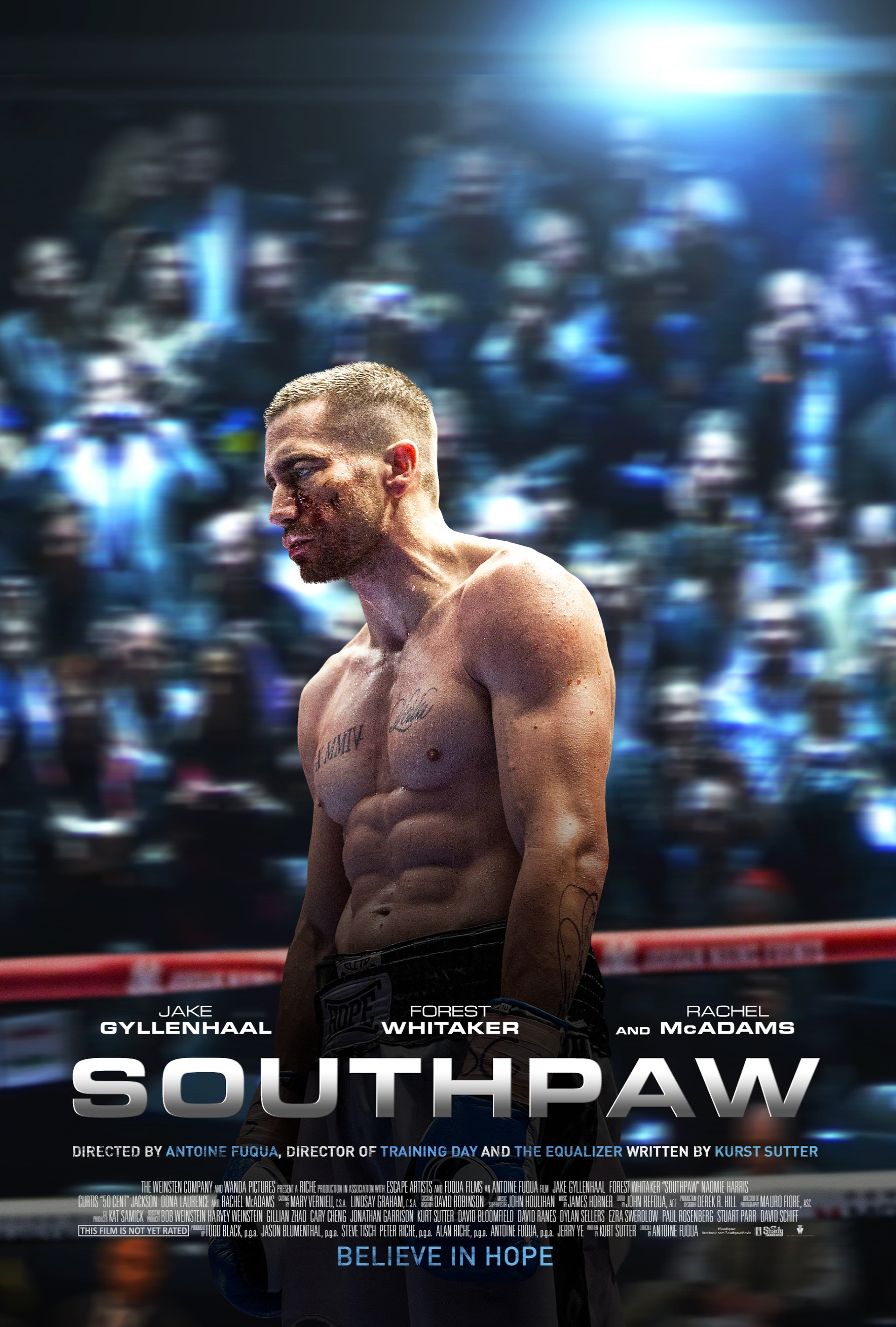 Southpaw is in a lot of ways a modern Rocky film. That said, as long as Creed exists we have a much better version of how to follow Rocky up. The fight scenes in Southpaw aren’t nearly as dynamic as Creed’s and the film goes a little too far in getting Billy to absolute rock bottom for his eventual climb back to success. This isn’t really a film I would recommend but it does have enough positives to keep it from being a bad movie. A sequel would have potential.

The movie starts with Billy becoming the world champion after another big win. His wife Maureen wants him to finally give up boxing though. They have a lot of money as it is and Billy is slowly taking more injuries with each battle. Billy agrees so he prepares a speech but when heading out he is confronted by an up and coming boxer named Miguel. Miguel baits Billy into a fight and during the scuffle one of Miguel’s minions fatally shoots Maureen. After she dies Billy’s life goes into ruins as he tries to end himself which results in his daughter being taken away from him as well. Billy’s also in danger of being bankrupt as he can no longer afford his lifestyle and mansion without money. His only choice is to get back in the ring once more but he’ll need a coach. Can he find someone to help him become the champion again?

So you can definitely see what the film is going for. Absolutely obliterate Billy’s life so then you can see him rise back to the top in order to set things right. The issue for any kind of adventure like this though is if you go too far in blowing up his life then even the climax won’t be as uplifting because there is no going back. That’s basically what happens here. For example, Maureen’s death is a big one. It’s not like she can come back to life so no matter what he does, that’s it. I think a better way to handle that plot would have been to have her get seriously injured or something and he doesn’t have the money to pay for her bills. That leads him to need to become champion again or win some more fights.

Something like that would still allow for almost all of the other big plots to continue. The only exception would be Leila’s story which would definitely need to be retooled a bit. It’s not as crushing a twist as having her die but that just felt unnecessary. Maureen was a fun character so it’s too bad that she got written out so quickly. Billy’s a bit of a tough character to root for most of the time. She helped steer him in the right direction but it’s clear that without her he wasn’t in nearly as good a spot as he once was. He blows up at his own friends to the point where he pulls a gun on one of them. He’s not very co-operative with getting a job initially and doesn’t exactly set a good example for his daughter.

He makes so many mistakes throughout the movie that even when he eventually solves them, you feel like he went quite far. Rocky at his lowest never made these mistakes. Additionally, Billy’s highs aren’t as high as Rocky’s. Rocky’s montages still hold up exceptionally well even after all this time. Billy’s is good as well but it’s clear that it isn’t even in the same league. The song isn’t as memorable and it just doesn’t have as much energy.

Leila’s a kid so it’s hard for her to process all of this of course but she’s not a very fun character most of the time. She definitely doesn’t make things any easier on Billy. Her worst scene is probably when she begs everyone to let her watch his big fight and then has a hard time watching because of how violent it is. That’s exactly why they were warning her not to watch it. Angela was a solid supporting character though. She’s the child services agent in charge of this case and was reasonable the whole time. She did seem to care about making sure Leila was doing well here.

Then you have the villain Miguel. There’s not much to him other than the fact that he fights dirty and likes to egg his opponents on. It wasn’t exactly hard for him to bait Billy into a match. He can fight really well so he’s not all talk but he definitely made sure to be as unlikable as possible. There’s just nothing nice about the guy or charismatic unlike someone like Apollo. Miguel’s fairly one note but his role in the film isn’t nearly as big as you might expect so it’s not a big deal. Finally we have Tick who ends up training Billy for the big fight. He’s a fun enough character and helps to set Billy straight on some things. You can’t win tournaments without a quality coach after all.

The fight scenes are pretty good. Southpaw is clearly going for a very realistic feel so you don’t have the dynamic cuts and lighting as other boxing films. I’ll admit that I miss those since these can’t standout as well without them but by and large I have no complaints with these scenes. You can definitely feel the intensity behind each swing which is the important thing at the end of the days. It also fits in with the rather gritty nature of the film.

Southpaw’s dark outlook can only take it so far though. You’d be hard pressed to call this a fun film. It tries to balance out being an uplifting film with giving Billy a new setback every few minutes so by the end of it you’ll be more exhausted than hyped. Maureen’s death was really my biggest issue with the film but other small scenes like Billy pulling a gun on his friend and threatening to murder him don’t help matters. You’ve got Billy’s suicide attempt as well and the film took the notion of “rock bottom” a little too far.

Overall, Southpaw will serve as a quick fix if you need to watch a big Boxing film while we wait for Creed III. That said, I would just recommend watching the Rocky films again instead. Those are just a lot of fun or check out the two Creed films if you haven’t already. Southpaw doesn’t do anything better than its rivals and as a standalone film it just barely manages to break even. The script isn’t great and there isn’t much replay value but I still wouldn’t call this a bad film because it has enough strengths in the fight scenes to keep it afloat.