This review is of the edited TV-14 version of the movie. All thoughts below should be addressed as such as a review of the unedited version would be more negative 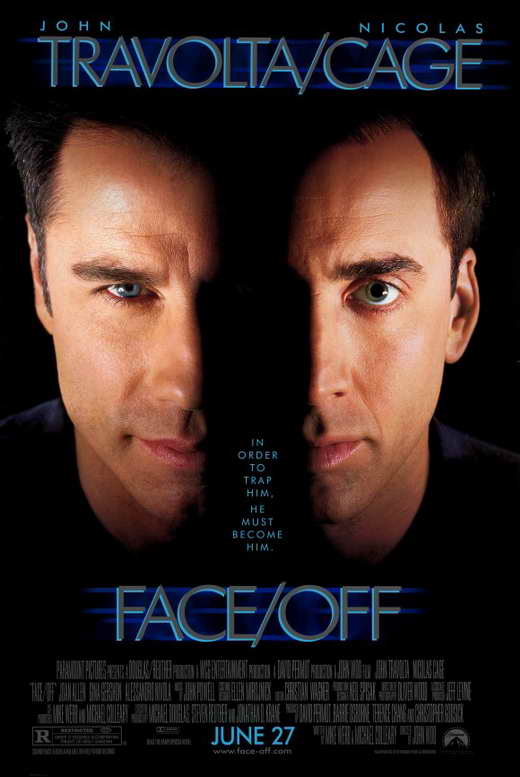 Face/Off is definitely one of the more intense action thrillers I’ve seen in quite a while. Everything really just keeps happening nonstop as we get many different gunfights and the body count is massive. Prepare yourself for an explosive time here as both of the main characters definitely will not be holding back this time around. It definitely has its share of slip ups but I will say this for the film, it does deliver on a lot of hype.

The movie starts with Castor attempting to assassinate Sean Archer, an agent of special forces. Unfortunately instead he ends up hitting Sean’s son. Castor decides to leave at that point although I was surprised he didn’t just take a second shot. We cut to 6 years later where Archer has finally tracked Castor down and defeats him after a big fight scene. The issue is that he has already planted a big bomb in the city that could destroy thousands. The only way to find out the truth is for Sean to go undercover using Castor’s face. There is a surgical operation that allows a person to swap faces with another and it’s actually a reversible process so supposedly there is no risk. Sean must now enter a top security max prison in order to find out about the bomb but meanwhile Castor wakes up and steals Sean’s face. With both people assuming the other’s identity, a game of cat and mouse begins.

When I say this film is nonstop action that’s almost an understatement. The amount of explosions here is absolutely crazy with both characters going at it over and over again. The movie has great music to accompany the fights and the slow-mo can be pretty fun with the jumping gun shots. Gunfights can get quite stylistic when you do them right and this crew definitely knows how to handle them. The standout fight for me may actually be the very first one at the airport though although there’s a lot of high quality ones.

You’ll notice right away that this film has quite the body count though. Characters are being blown to shreds left and right. If you’re a supporting character or even a main one you are absolutely not safe here. There were a few characters that died rather unexpectedly if you ask me. I’d point to at least a certain hospital scene for that where there were two characters that I thought were going to make it out of this. Then if you’re any kind of nameless grunt trying to get into the action that’s game over. Some characters are almost literally minding their own business but just get shot anyway while the characters are fighting. By the ending, while it’s an uplifting one, there’s a bitter sweet element to it since Castor manages to take out so many people. Even Sean is forced to take out a bunch while he is undercover since he needed to get out alive.

The movie goes out of its way to make Castor as unlikable and irredeemable as possible though. In his very first scene he makes it abundantly clear that he is absolutely crazy and this never lets up. It does get to the point where he begins to hold the film back though. He has so many bad scenes that you’ll lose count. You’re supposed to dislike the character of course but I think the movie could have shown a bit more restraint with him.

Meanwhile Sean is a good character. He is put in a very tough situation most of the time though. Things are not easy on him for over half the film. I have to say that I definitely wouldn’t have agreed with his decision to swap faces in the first place but at least he was doing it for the right reasons. The rest of the film is him just having to deal with the consequences of that. He’s a good guy and even ends up helping out with someone else’s kid who would have been in a tough spot without him. His instincts as a parent kicked in quick and I definitely had no qualms with him as the lead.

This film can definitely be very violent at times. It’s certainly an old school thriller in that sense with people being shot dead left and right. You’ve also got the face operations of course which are gruesome almost by definition. The whole process looks crazy painful and even just imagining how someone would look without a face is not a pleasant sight. As for the constant explosions, I will admit that they almost get funny after a point. At the very least it’s hard not to laugh near the end when the two characters are lighting the city on fire because of how over the top it is. The same fight scene is extended multiple times so that the fight gets restarted each and every time you think it’s about to be over. Definitely, a good way to keep you guessing on when it’ll actually end though.

Face/Off has some decent humor scenes though. I liked when the scientist got summoned to Castor at the hospital and still had the guts to ask what he wanted. It was rather obvious as Castor pointed out so it’s not the kind of thing you’d usually have to ask twice about. I guess he was stressed out which is why he didn’t put 2 and 2 together though. There’s other funny moments like that as well and it helps the film keep a light tone even with how violent and dark other aspects of it could be.

I also liked the scenes when Castor and Sean would face off. There was a lot of pretty intense battles between them with strong dialogue and generally hype scenes. Likewise at the very end of the film we also get a really good standoff between a bunch of the characters. I always like standoff moments like that. They’re quite tense and test out how quick on the draw you are.

The thing is, Castor gets away with a ton in this film. While he’s masquerading as Sean, he gets to abuse his power quite a lot. That’s not even getting to the fact that he was with Sean’s wife for a while and that whole plot-line’s just not pleasant even if you don’t really see anything. The idea of two guys getting to switch their lives in a thriller context is definitely a unique one and this film really tried to make the most of it, but ultimately it just made too many mistakes for me to say it’s a good title.

Overall, Face/Off is a very long film and you can feel the length. That said, unlike some films that are this long, I wouldn’t say that’s a bad thing. On one hand, usually you want a long film to feel short because it means that the film really breezed by, but on the other hand, I think you can appreciate just how much this film was able to accomplish in its run-time. The movie was able to really delve into this plot and the various ramifications of it a lot more than it ever could have done so in around 90 minutes. Really if the film would have laid off of the violence and heavily toned down Castor’s character, I think everything would have worked out really nicely. It’s not like it would be a perfect film but those two changes would have made a world of difference. Castor ultimately just goes way too far so you aren’t able to enjoy pretty much any scene where it’s just him so he holds the whole thing back.